Casals focused on welcoming Latino community to the tennis court 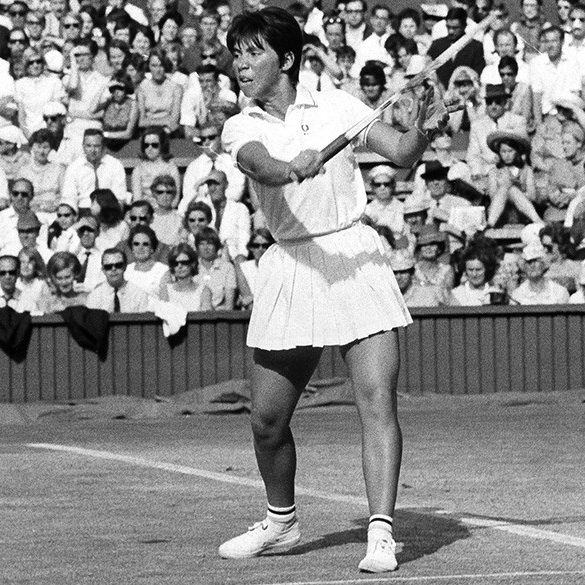 In just seven short years, Rosie Casals and her Love & Love Tennis Foundation partner Tory Fretz have tirelessly introduced the sport of tennis to hundreds of Coachella Valley youth, offering scholarship grants and free clinics to the diverse and underserved communities on the outskirts of glamorous nearby cities like La Quinta, Indian Wells, and Rancho Mirage.

“We work a lot with the Boys’ and Girls’ Clubs throughout the region, and work with the local high schools too,” said Casals, who partnered with longtime friend and Foundation Vice President Fretz in 2015 to form the 501c3 non-profit. “We have a lot of wealth here, but a lot of poverty also.

“We have all the tennis courts in the world, but it’s not accessible to them,” Casals continued. “If you live in the east, it’s hard to get people to travel to places like the Tennis Garden. We’ve been putting on clinics, and even going to the north and in Palm Springs. Just at least so that some of these kids can be introduced to tennis.”

In 2018, Love & Love Tennis Foundation partnered up with the Richard Pancho Gonzalez Youth Foundation led by late tennis great Pancho Gonzalez’s son Dan and nephew Greg in Goodyear, Ariz. The group’s collaborated on an event to promote and celebrate Hispanic Heritage Month, which this year is being recognized nationally September 15 to October 15.

But Casals said the two foundations jointly decided they needed more representation than what they had been providing locally.

“It took a moment to realize we needed to do more than what we were doing,” said the 73-year-old Casals, who won more than 90 career pro titles and 12 Grand Slams in doubles during her playing career in the 1970s. “We want to raise enough money for all Latinos who want to do business in tennis, whatever it may be.”

Casals, a 2021 inductee with the ‘Original 9’ into the International Tennis Hall of Fame, said the September Hispanic Heritage Month cultural event at Barnes Tennis Center (Sept. 17) will help kick-off the Latin American Tennis Foundation. “The Foundation will be a kind of an umbrella and will be nationwide, and someday globally,” Casals said. “We will still be doing out work on the local level for all underserved kids, not just Latinos. We will work with all levels of kids and won’t discriminate.”

Discrimination is something Casals knows something about having grown up in a poor San Francisco neighborhood as a young child, her parents immigrants from San Salvador. “I was lucky that I learned to play tennis and my dad taught me,” said Casals, whose story is well-documented over the years. “I soon realized things were very different on the other side of the tracks. Besides the clothes being white, things were very white in tennis and there were very few Latinos playing tennis.”

She met Pancho Gonzalez when she, along with Billie Jean King and two others, became “contract pros” and traveled the professional circuit pre-1968 Open era playing a series of matches with players like Gonzalez, Rod Laver and Ken Rosewall. She later became Pancho’s mixed doubles partner at Wimbledon.

“We were oil and water,” she said of Gonzalez. “He was considerably older than I was.  Our first Wimbledon it was very mixed because he kept telling me what to hit and that only he would hit all the overheads. Of course, that didn’t really sit well with me because I had a pretty good overhead too.”

Casals did win two Wimbledon mixed doubles titles but with a partner who was known to be just as volatile as Gonzalez in Ilie Nastase from Romania in 1970 and 1972, and the US Open with American Dick Stockton in 1975.

“I loved him to death and loved to watch him compete,” Casals said of Gonzalez. “There was no one like him to compete like he did and put himself all in. He was a beautiful player, even at the age of 40. Just a beautiful specimen. I’m only sorry that more of the world didn’t get to see him play because he had to go pro. He had to make a living and make money. At that time, you weren’t going to make any money as an amateur.”

Casals looks forward to continuing with her Love & Love Tennis Foundation and teaching more and more children the game that has brought her so much in life. “We get them going in the right direction,” Casals said. “Maybe with a scholarship to school. Or even the tour. We give them a dream that at least hopefully someday can become a reality.”