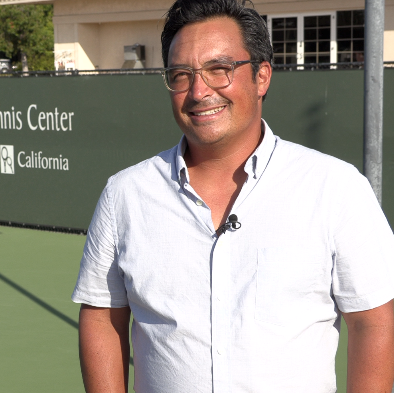 Ryan Redondo is back on familiar – and familial – ground.

The newly appointed general manager at Barnes Tennis Center, Redondo is poised to bring a wealth of experience to the expansive 25-year old facility, and San Diegans can be sure that his influence will be felt in a hurry.

Once a talented Southern California junior from a renowned tennis family, Redondo went on to compete at the college level and got a taste of the world tour. Most recently, Redondo was instrumental in the prosperity of the men’s tennis program at the University of the Pacific in NorCal, where he garnered multiple accolades (including West Coast Conference Coach of the Year) in over a decade as the school’s heralded head coach.

Earlier this year, Redondo and his family decided that Southern California was calling them home, bringing an end to his remarkable tenure in Stockton. He was appointed Head Tennis Pro at Rancho Santa Fe Tennis Club, managing the facility and teaching high level juniors. But soon after, a golden opportunity would present itself.

“I just wanted to get back to San Diego and help develop San Diego tennis,” Redondo told USTAsocal.com. He’d play at the very first tournament at Barnes Tennis Center, then competed as a junior on the Barnes courts. He’d played and coached college matches on the same grounds. Now, Ryan Redondo was headed back to San Diego to become the Center’s GM.

“It’s really just coming around full circle to my connection to San Diego tennis, and my family’s connection,” Redondo said. His father Skip, one of nine Redondo siblings, comes from the same heritage as Walter, Marita, and Marisa – the trifecta that swept the 1972 SoCal Junior Sectionals.

At his very first staff meeting, Redondo took a seat at the conference table and noticed his great-grandmother’s tennis sportsmanship award hovering right above him. Mamita Redondo had been the matriarch who started the family’s love affair with tennis. “I hadn’t seen that in 15 or 20 years. It’s definitely a sense of being home.”

One of the top priorities for Redondo, who also helms the non-profit Youth Tennis San Diego that supports Barnes’ NJTL chapter, will be the cultivation of a holistic youth tennis pathway that starts with the Junior Aces program for 3-5 year-old youngsters. “It all really starts there,” he said of the kids’ programming. “We’re going to have a very transparent junior pathway, starting with red ball, orange ball, and green dot as our foundational pieces,” leading to a new course for players who wish to continue either competitively or recreationally.

An early coup for Redondo was the arrival of Steve Adamson’s Tennis Academy, which now operates out of Barnes. The organization features many of the top SoCal ranked juniors. “Having that elite group is going to have a trickle-down effect on all of the different stages, all the way down to the red ball.”

Barnes Tennis Center also anticipates one of the year’s few Level 2 National junior tournaments, the Zimmerman/Johnson Tennis Tournament, on its calendar beginning September 18. The annual event, held previously at Stanford University, sought a new home due to the pandemic-stricken schedule. Redondo and Barnes stepped up, and this fall will host sixteen of the nation’s top 14s, 16s, and 18s in both boys’ and girls’ divisions.

“It’s a really prestigious event,” Redondo said, noting that players from San Diego have gone to NorCal and won the tournament in past years. “It’s the kind of event all the kids want to play… and it’s cool that we can bring it back here for all of our local players.”

Yet while hosting top national competitions, Redondo is assuredly focused on growing the game in San Diego and throughout Southern California. It’s a role he does not take lightly. “I have a big job,” he said. “I want to take (Barnes) to the next level… San Diego tennis can take a big jump here.

“The community is so strong and so rich with great coaches and great players. I just feel lucky to be a part of it.”