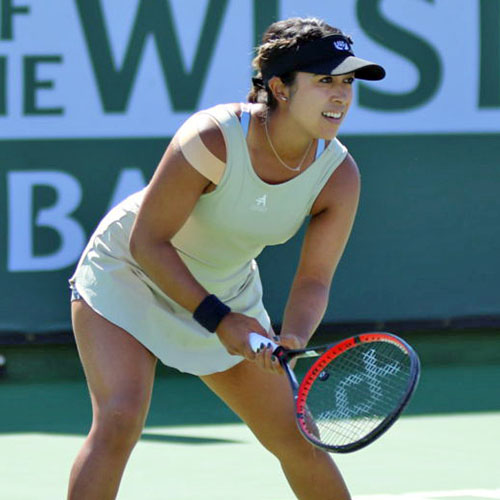 Sabrina Santamaria’s mother emigrated to Los Angeles from the Philippines, while her father came to Los Angeles from Panama. Both of her parents were tennis players and met playing tennis on public courts in Koreatown in the 1980s. There was absolutely no doubt that Sabrina herself would be a tennis player, and now that she is well into a fruitful professional career, Sabrina is keen to make an impact on her community. Sabrina also hopes to use her platform to inspire other players who are growing up playing on public courts like she did.

Born and raised in Griffith Park, Santamaria was handed a racquet as soon as she was able to swing her arms. “I’ve seen photos of me in a crib as a newborn, with a racquet in my hand,” recalled Santamaria, “I think four or five is when I really just started to pick it up, and I played in SoCal tournaments around eight or nine.” What is so unique about Santamaria’s experience growing up as a junior is that she bounced around a lot of public parks in Los Angeles.

Santamaria never belonged to a country club or a tennis academy, and her main coach growing up was her father. “There’s a specific set of courts called Vermont Canyon up by the Griffith Observatory,” explained Santamaria. “I love those courts! It’s a beautiful backdrop. You’ve got these gorgeous mountains, you’ve got the observatory, and the Greek theater so you can hear music while practicing.” Santamaria has no lack of memories at her local courts and is thankful for the opportunities in her community.

As a junior, Santamaria’s father would train her in unorthodox ways, asking local adult players to hit with her. “Once I started getting better, he would put 20 bucks against anyone who wanted to take me on,” laughed Santamaria, “It was just fun. I think it was super helpful looking back on it because I was exposed to so much variety. I had older guys slicing and dicing, hard hitters, I had loopers. So it was great.”

Santamaria’s career as a junior player was also heavily based in Southern California, spending most of her time playing at tournaments in Orange County at places such as Los Caballeros Sports Village. “I met so many lifelong friends,” said Santamaria. “Just having those memories at Junior Sectionals at Los Caballeros, I still remember all of that. They were probably some of the happiest times as a junior.” Santamaria grew up playing alongside some other successful professionals and college players such as Marcos Giron, whom she once beat in a mixed doubles final at junior sectionals.

At around age thirteen, Santamaria decided that she wanted to take tennis seriously, with the goal being to play at college. Santamaria would play at USC and stated that her time with the Trojans was the four best years of her life. “It was so special because I had so many of my close friends on that team,” explained Santamaria. “My freshman year, I think the majority of the team was Southern California girls. The camaraderie and the chemistry was just unmatched.” Santamaria’s team in her freshman year reached the NCAA final four for the first time in over a decade, and in her second year she won the NCAA doubles title alongside Kaitlyn Christian, another Southern California player who she grew up playing at sectionals with.

Now that Santamaria is on the professional circuit, she has found her goals changing and centering more on herself and her own personal growth. “I want to evolve kind of into the player that I want to be,” said Santamaria. “As opposed to ranking based goals or outcome-based goals. This year I’ve really been focusing on how I feel on court. Tennis is such a tough sport, and it’s been a bit of a difficult year. But changing that mindset is helping me a little bit more, just focusing on trying to get better and improving my game.” She is also taking the time to put an emphasis on her mental health and treat her mental state with importance. “We’re alone, so much of the time,” rationed Santamaria. “I have a mental health therapist that I talk to, and that helps. Being able to talk to someone who isn’t directly related to you, or a friend, or a coach, is helpful because it gives you the freedom to speak and let your thoughts go.”

Along with her pursuit of a successful pro career, and a healthy relationship with the sport, Santamaria is also eager to give back to her community. “Growing up in Los Angeles, we have a ton of Hispanics and Latinos,” explained Santamaria. “The Latino community is very close knit, and having family and friends that rally together is something that’s super special. It’s really pushed me to do something bigger than myself and do it for my family.” Santamaria is especially grateful for the sacrifices that her parents made, being motivated by the desire to do right by the work they put in to give her opportunities in America.

Representation is important to Santamaria as well, and she hopes to be a role model to generations of Latinos and other minorities, in the same way that she credits Serena and Venus Williams as inspiring her. “Especially for girls, it’s so difficult to stick with sports,” said Santamaria. “Being able to be there for them and showing them that it’s possible. That’s the impact I want to have. Whenever I can, I like to hit with kids and do clinics, especially to help lower income communities. That’s definitely been one of the things that I’m passionate about.”