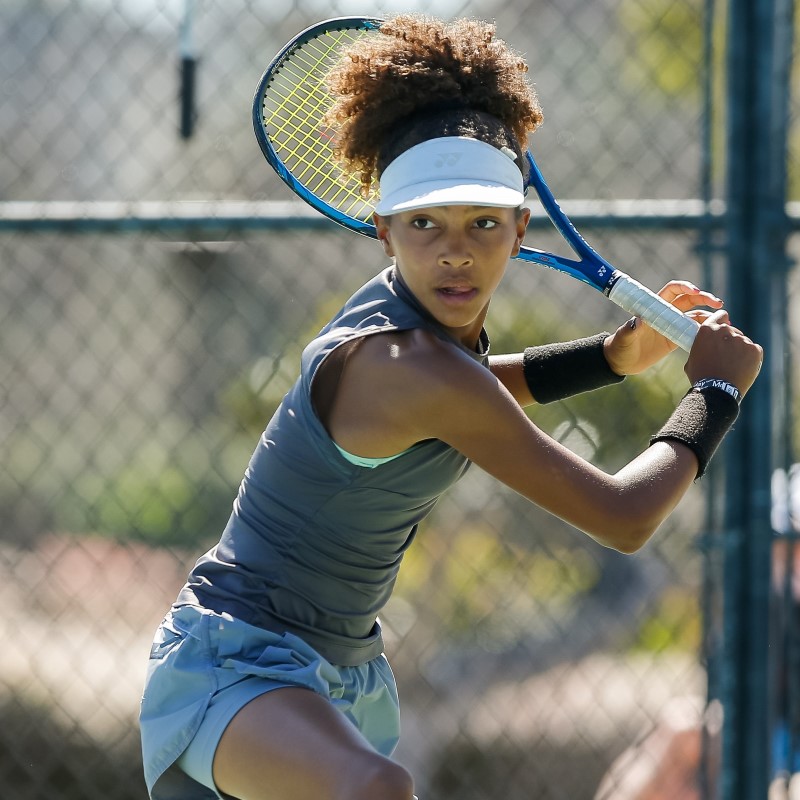 After finishing up a challenging once-in-a-lifetime acting project, you can’t blame Thea Frodin for wanting to take a break from Hollywood and choosing to focus on her tennis – including the upcoming USTA SoCal Junior Sectional Championships – for the rest of the summer.

The 12-year-old Frodin plays the on-court tennis role of a young Serena Williams in the upcoming Netflix feature film “King Richard” starring Will Smith as Richard Williams to be released in November.

“It was a lot of work,” said Frodin, who has done television work and has two Nike commercials on her acting resume. “I just did the tennis part and didn’t have a speaking role. I just did it for fun. One of the reasons it was hard was that I had to play differently than I normally do, and just like Serena.”

Frodin of Woodland Hills will play up in the 14s division at Sectionals (June 12-20, Orange County). She’s had success at past Sectionals having made the singles final in the 12s in the fall of 2020, and winning the Triple Crown of singles, doubles and mixed in the 10s in 2019.

Coached by Cecil Mamiit of TMX Academy in Burbank, the home-schooled rising seventh grader Frodin was a runner-up in the 12s in singles at her first Easter Bowl in April, made the semifinals at a National Level 1 in Georgia and won a large National Level 1 in Virginia Beach. Her Easter Bowl runner-up appearance was, in her mind, the biggest tennis stage she has played on at this point in her young career.

“I was really happy with my first Easter Bowl tournament,” said Frodin, who also works with the USTA National coaching team in Carson and popular women’s coach Maureen “Mo” Diaz. “I tried getting in before but I wasn’t able to. I’ve gotten much better and really have improved.”

Frodin said she didn’t get nervous during the Easter Bowl final and that she “gets all my nerves out during the warm-up.”

“I love the match play and the competitiveness,” she added. “I love the pressure and the learning. There’s so much to learn.”

Following Sectionals this month, Frodin will visit her father Mathias Frodin’s native Sweden and train on the clay for three weeks, as well as play 16s and 14s junior tournaments, at former ATP pro Magnus Norman’s Good to Great Academy.

“I go over there every year and have been like 11 or 12 times total,” Thea said of her time in Stockholm. “I got to meet Stan Wawrinka’s coach. It’s been great to travel internationally and get the extra training on the clay.”

Mathias is a visual effects expert for a major movie studio and serves many crucial roles as a devoted tennis player to a top junior. “I pick up a lot of balls,” may be the most important job, he quipped.

As for her new Hollywood alter ego, Frodin has never met Serena in person but does enjoy watching her idol play as well as all the other top players during the Grand Slams, like the French Open going on now.

Frodin’s ultimate goal is to become a successful professional tennis player, but she thinks college is in her future plans. “I want to go to college first,” she said. “My dream school is Stanford.”