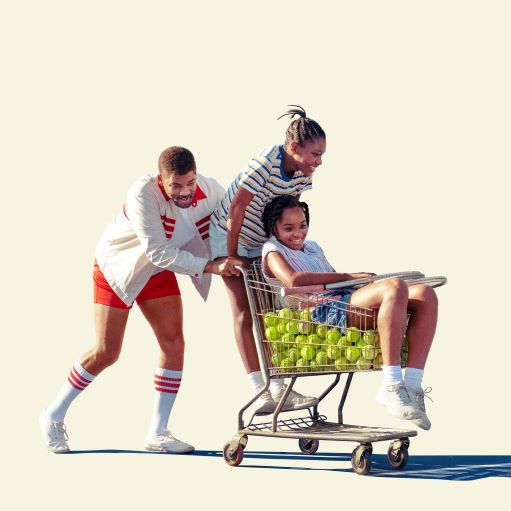 Southern California tennis was in the spotlight throughout the highly talked about new feature film “King Richard”, which opened up in theatres this month behind the star power of an Oscar-worthy performance by producer Will Smith, who stars as Venus and Serena’s father Richard Williams.

The tennis scenes were shot on-location locally at Dignity Health Sports Park in Carson, the Claremont Club and the Racquet Club of Irvine.

SoCal tennis players will not only recognize the venues, but the lines judges and chair umpires as the film’s producers contacted the local USTA Southern California offices hoping to use real and experienced officials in the film. The film’s people were put in touch with former USTA SoCal official Ken Grassel, who recruited eight others including Teri Cohn and her husband Jeff, all seasoned professionals who have worked numerous big events like the US Open and BNP Paribas Open.

“They really did want to get it right,” said Teri Cohn, a veteran USTA official who was seen in the film as a line judge and even got credit for one word yelling “NET!” after a net-cord serve, which wasn’t originally in the script.

Other officials that appear in the film and are real-life pros besides Grassel, and the Cohns included: Selwyn Brereton, Valerie Davidson, Holly Haggerty, Maureen Regan, Linda Sharpe. Both Albert Ton and Jeff Cohn served as chair umpires with Jeff umpiring the final match of Venus’ first WTA pro tournament in Oakland shot on-location in Carson.

“It was a little surreal playing Serena, and I was so excited to hear that she liked the film,” Frodin said at a special SCTA Foundation fundraising screening of the film.

It’s been exactly one year since Teri, Brereton and Regan spent a full two weeks on set while others worked three or four days, including Riverside’s Haggerty who stayed with good friends the Cohns in Upland. “We had to wake up at 3:15 a.m. and drive to Carson for our 5 a.m. call-time,” Haggerty said, adding that strict Covid restrictions delayed filming twice and they had to test regularly.

“They would yell, ‘masks off’ and we would shoot the scene and then, ‘masks on!’ ” Haggerty said. “We would do the same thing over, and over and over again. There was lots of good food, and good overtime.”

Cohn echoed Haggerty’s sentiments on the time spent between scenes waiting for the “ACTION” call. “I was surprised how tedious things were,” she said.

Because of Covid, Haggerty said it was great to get back in the routine of seeing her friends again. “We didn’t do an event since Indian Wells was cancelled in March until September,” Haggerty said. “And even then it was limited. So to be back and working one year ago at this time was so great.”

Cohn and good friend Regan stood atop the stadium court and looked down at the first tennis balls they’d seen it in months. “It was crazy,” Cohn said. “Even though it wasn’t real it was like it was for us. Looking down. It was the only tennis we would call for the rest of the year.”

Surprisingly, Cohn, Haggerty and even Grassel have yet to see the movie despite being invited to a special cast and crew showing on the Warner Bros. lot and its opening on Friday, but all are excited to finally watch the finished product.

Search the IMDB website and you will find Cohn and Haggerty’s name appear for their roles. “It was quite an experience and a total surprise to be selected,” Cohn said.