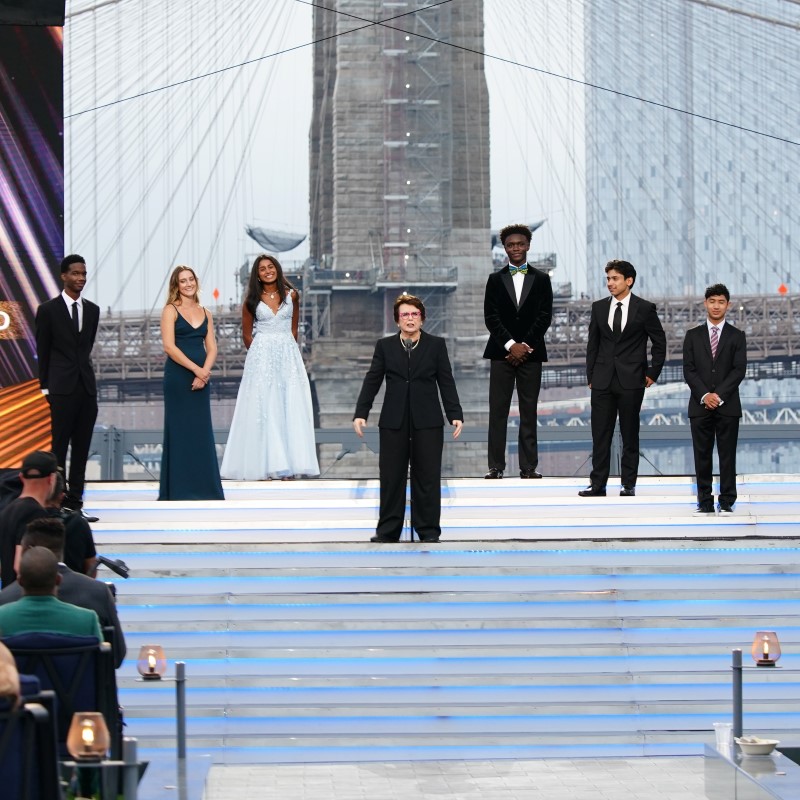 ESPN’s seventh annual Sports Humanitarian Awards were awarded recently in New York City, and four Southern California juniors were celebrated for their vision and leadership as recipients of the Billie Jean King Youth Leadership Award. The event will air as a 90-minute television special on Saturday, July 24, at 2 p.m. ET on ABC.

The Billie Jean King Youth Leadership Award celebrates and honors youth who are using the power of sport as a catalyst for change and making a positive impact on society. Local honorees include Tory Bailey, Gabriel Banuelos, Jacob Eusebio, and Amani Shah.

After not being able to play tennis in the California Interscholastic Federation (CIF) as an independent player because of California’s current rules and regulations for both charter and home school students, Tory Bailey recognized the inequities and began working with the Pete Brown Junior Tennis Program (PBJTP) to develop a community tennis program for non-traditional high school players. With PBJTP, Bailey created a community plan that proposes a change to CIF’s current entry process policy to play tennis for students in the Southern Los Angeles Unified School District, charter and private schools and homeschooling programs. Bailey believes tennis will open the door of equal opportunity for inner-city students who come from low-income environments, and is fighting for a community tennis program that will allow for these non-traditional high school players to compete in CIF’s tennis season and playoffs. Tory will be attending Howard University this fall as a scholar athlete playing on the men’s tennis team.

As a son of an immigrant and single mother in the Watts area of South Los Angeles, Gabriel Banuelos, grew up in an environment filled with high poverty, guns, drugs and gang violence, which ultimately prevented kids like him from playing outside. Banuelos recognized that children from the projects needed safe places to play, and he decided to take action by approaching the Los Angeles Police Department about creating a safe environment for youth to play soccer outside once a week. This led to a collaboration with LAPD’s Police Athletic League (PAL) program and Nick’s Kids was born to not only provide youth a safe place to play, but to also allow kids to interact with police and alleviate their fears of law enforcement. Today, over 30 kids meet several times a week at a supervised park to play soccer, have fun and are allowed to simply enjoy being a kid. Gabriel will be attending UCLA in the fall.

Growing up with an autistic brother, Jacob Eusebio always understood the disparities people with intellectual disabilities face as they navigate their daily lives, along with the challenges of finding inclusive programs for them to participate in. For Eusebio, it was difficult to find his brother adaptive group tennis lessons, so he created Serving Advantage to make tennis accessible to children with developmental disabilities, while allowing high school tennis players to coach and interact with the kids, no matter their ability. By partnering with local organizations, Eusebio saw a 450% increase in student participation, with 99% of the kids having no prior tennis experience. The Doubles Partners volunteer program creates a two-way street where students with disabilities connect with peers in a safe environment, and partners are taught how to be empathetic and understanding of their differences. Eusebio hopes to create a judgment-free space where special needs and general communities create lifelong friendships that transcend tennis.

As a young tennis player in Southern California, Amani Shah has realized the incredible benefits the sport provides her, while also recognizing within her community the huge gap in diversity, inclusion and access to the game that exists, largely due to the financial costs to participate. To address these disparities, Shah and her sister founded Second Serve — a fully youth run nonprofit organization — in 2019 with the goal to give tennis equipment a second chance by collecting gently used and excess tennis equipment, and redistributing it to underserved youth around the world to help kids gain access to the sport. Shah’s leadership has led to Second Serve growing its team to include over 70 Second Serve Presidents between the ages of 13 and 17 across the country. Her organization also partnered with local nonprofits to donate equipment in underserved communities across 23 states, as well as internationally across 11 different countries, including Uganda, India, Nigeria and Argentina.