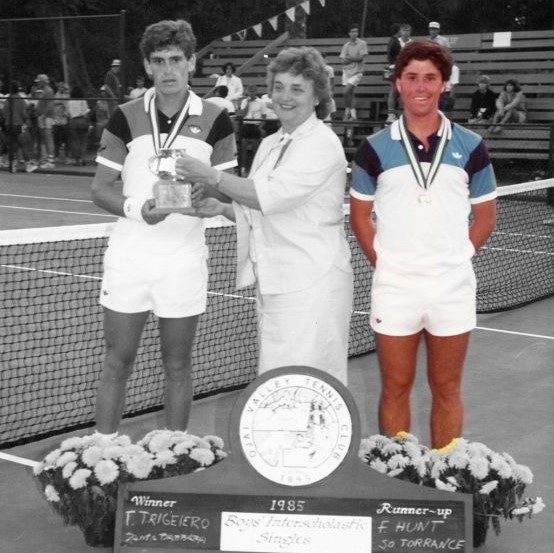 For those who knew him best, Forrest “Woody” Hunt was simply larger than life, someone who had a contagious personality, a dogged work ethic and who lit up a room any time he entered.

He also happened to be one of the best junior tennis players to ever come out of Southern California.

Most of SoCal’s top junior players competing this week in the prestigious 39th annual South Bay Level 4 event named in his memory – the South Bay Woody Hunt Junior Tournament – have never heard the name Woody Hunt. Yet there is so much that can be learned from a player like Hunt, who was described this week by his first coach and tournament director Dennis Rizza as the person who competed harder than any player he ever coached.

“When I think of Woody, I think of what a grinder he was – the hardest working player I ever coached,” said Rizza, who retired from his job as the Director of Tennis at the Kramer Club a few years ago, but still chooses to run the event he had named after his former pupil. “I teasingly say he ruined me as a tennis coach and really spoiled me because I had never seen anyone work as a hard as him. Years later I would get a lazy kid who didn’t want to work and I would say, ‘You’re never going to be that good.’ ”

“He quite simply made you smile every time you were around him,” recalled Trevor Kronemann, the Interim Executive Director and Director of Junior Tennis for the USTA SoCal, who faced Hunt while the two played on the ATP Tour.

Sadly, Hunt also suffered from severe mental health issues and was diagnosed with biopolar disorder and an addiction problem to drugs and alcohol. A serious auto accident in 1996 left him without the use of his right arm, and he tragically took his own life in December of 2002 at the age of 36.

His college teammate at Cal-Berkeley, the esteemed New York Times sports columnist Kurt Streeter penned the obituary on Hunt in the Los Angeles Times. In the obit, Streeter called the former South Torrance High School student “one of Southern California’s finest junior tennis players during the early and mid-1980s. Possessing an unyielding determination and a powerful backhand, Hunt was part of a generation of top Los Angeles-area tennis players that immediately preceded such local talents as Pete Sampras and Michael Chang.”

It went on to state that in 1985 Hunt was a singles and doubles finalist at the USTA’s junior national championships, held in Kalamazoo, Mich. That year he was ranked fifth nationally among singles players 18-and-under.

A series of serious injuries never allowed Hunt to realize his pro tennis dreams and he got to as high as No. 250 in the world. He was still selected in 1991 to join the U.S. Davis Cup team led by John McEnroe that went on to defeat Spain in Newport, R.I.

Rizza first met Hunt and his working-class family when they played at Rancho Verde in San Pedro in 1975. Rizza then moved over to the Rolling Hills Plaza Racquet Club, a mile and a half from where Hunt lived.

“Woody was a type-A personality so whatever he did, he did it to the max,” Rizza said. “Once when he was around 10, I said, ‘Let’s try a one-handed backhanded. And he picked it up so fast. It became one of the best in the world. People marveled at his one-handed backhand.”

Hunt was in the middle of becoming a three-time All-American at Cal when Rizza moved over to the Kramer Club in 1986. “He would come up to the club and say let’s work out and we’d go for two hours straight. And I would just run him around. He’d lay on the court full of sweat and get up and say, ‘Let’s go again.’ He had such a good work ethic.”

Current Kramer Club General Manager/Director of Tennis Peter Smith coached against Hunt when he was at Fresno State, and also faced him in SoCal money tournaments, including the singles final of the 1987 Santa Maria Open (a match this author covered as a 17-year-old aspiring sportswriter for the local Santa Maria Times).

“Woody was as fierce a competitor as you will ever meet,” Smith said. “He just went out there and competed hard every time. The guy was born to compete.”

Rizza said he is remiss for not bringing up Hunt’s name more often to the juniors he sends out to the courts this week, and that he would change that this weekend during the finals.

Said Smith: “I know I told my kids in clinic about Woody. What a fierce competitor he was. It’s just incredible for his memory to have this tournament named after him, and a great distinction really.

“He had a tragic ending. But for us that knew him, the intense competitor he was is the side of him you’d just rather remember.”

His former rival Kronemann concluded: “Every year this tournament rolls around, I’m reminded of a friend who meant so much to Southern California Tennis. His intensity, passion, and love for tennis and his fellow competitors were unparalleled. Growing up he was bigger than life and everyone wanted to be around him no matter the situation. He was quick with a joke, would make you laugh when you needed it, but more importantly, one of the premier U.S. Junior tennis talents of my generation. He made us all better tennis players and was always ready to compete on or off the court.”