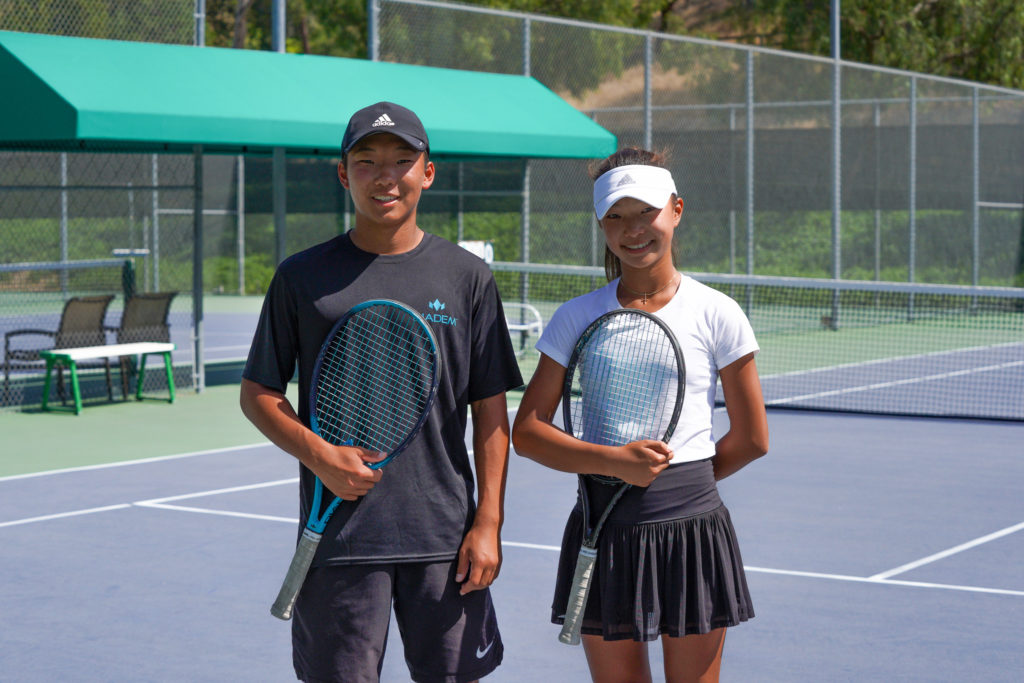 Being well-rounded both in athletics and performing arts has always been important for members of the Suh family from the City of Orange. Fifteen-year-old Nathaniel holds a USTA national ranking and plays for the Villa Park High School team as a freshman, while 12-year-old Sophie is a sixth-grader at Tustin Connect and is among the top players in her age-group nationally.

Both siblings embrace their Asian American heritage, especially during the month of May with the observance of Asian American Pacific Islander month, tracing their ancestry to Korea. The patriarch of the family, Dr. Will Suh, is a cardiologist raised in Chicago. Nathaniel and Sophie’s mother Caroline was born in Korea and moved to America when she was 2 years old.

“So I guess you can consider Nathaniel and Sophie 2.5 generation Americans,” said Will Suh.

“With May being Asian American Pacific Islander Month, I feel proud to be Korean,” said Nathaniel, who also enjoys going to the batting cages with his younger brother and playing video games on his computer. “My parents have taught me to be proud of who I am and my heritage.”

Nathaniel is learning how to play the Nanta, traditional Korean drums, and will be performing later this month with his drum group. Sophie does Korean dance and is also learning to play the Korean drum and gayageum, a stringed zither.

“Doing these things makes me feel connected with Korean tradition and culture,” said Sophie, who appears in a music video by the rock group Steelheart with her Korean dance group.

But it is on the tennis court where the Suhs have received the most accolades. Nathaniel won a bronze ball in the 14s at the FILA Easter Bowl, but his best USTA Nationals result was a silver ball at Winter Nationals in January. Last year, Nathaniel won the 16s at the L4 JP Yamasaki and Fullerton. He will play SoCal Junior Sectionals in June and continue training for USTA Boys’ 16s Hardcourt Nationals at Kalamazoo in August.

Last year, Sophie won a gold ball at USTA 12s National Indoors and recently won the L3 14s in Irvine. “I love the adrenaline rush of winning a tournament,” said Sophie, who has been training at USTA Carson and will also play Junior Sectionals. “I like the sound the tennis ball makes when hitting it hard.”

Nathaniel says he enjoys tennis because it’s an individual sport and counts the Big 3 among his favorites. “But lately, I’m a huge fan of Carlos Alcaraz. He is not that much older than me,” Nathaniel noted, “but his game is big and his results are amazing.”

Both siblings idolized Asian American sporting heroes growing up. Nathaniel loved basketball as a young child. “I realized I wasn’t going to be the next Jeremy Lin, so I decided to try tennis,” he said of the former Lakers guard. “I went to Lakers games to see him play especially because he was the only Asian player on the court. I also like Simu Liu since he is the first Asian Marvel superhero. Shang Chi was an awesome movie.”

He added: “I really liked the competition of an individual sport and I think my basketball skills helped me with my tennis.”

Sophie favored Serena Williams early on and notes she has won more Grand Slams singles titles than any of the men. “I really like Li Na. She had an aggressive game style. I want to have a down the line backhand like hers,” she said.

Like Nathaniel in basketball, Sophie said Korean dance requires good footwork and rhythm, which has helped her with her tennis. She concluded by thanking one person who has made it possible. “It’s hard to balance both, but I have to thank my mom for driving me to both practices,” she said.