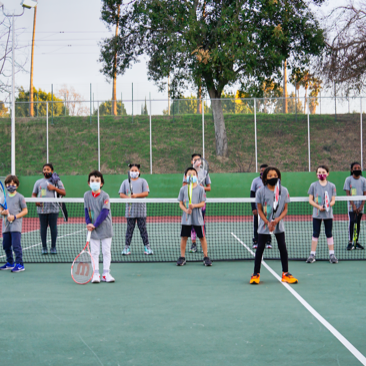 A powerful wave of growth in what is still labeled as an “elitist” sport has crashed into the game, creating evident change when it comes to diversity. This growth is not only due to awareness of past racial tussles, but the willingness to take action. Although there are still very few Black-owned small businesses within the tennis realm, they are in fact leading the push to diversify the sport and build opportunities for those that didn’t believe it was possible.

Doris Obih, founder of the non-profit 40 Love, almost removed herself from the very organization she felt so passionate about, solely due to the color of her skin. Obih, whose non-profit provides over 200 under-resourced children with academic resources and access to tennis facilities and coaches, initially believed more people would acknowledge the program if she weren’t Black.

“You know what’s sad, I did think that I had to remove myself from 40 Love so we could get more traction,” Obih tells TENNIS.com. I thought if they didn’t know that it was Black owned, then we could get people in. I was wrong, but that was my initial thought.”

Despite her overwhelming feelings, the 30-year-old founder pressed on with the vision of providing children a similar experience she had when picking up a racquet at seven years old. Obih’s perseverance has led to hundreds of kids having access to the financial and educational support on and off the court. The program is now part of the National Junior Tennis and Learning (NJTL) network and is in partnership with both city officials in Southern California and the USTA.

The efforts of 40 Love are paramount when it comes to continuing to crack the historical racial glass ceiling lingering in the present. The foundation is undoubtably helping push the Black boys and girls past the road blocks, but the ceiling isn’t completely shattered.

In a 2010 article of the New York Times, Serena and Venus Williams’ father Richard pointed to self-efficiency as a key to the solution in establishing a stronger Black presence in the sport.

“You can only be good if you have a system behind you and not ahead of you, blocking you from getting there,” Richard said.

One of the hurdles is the sport’s hefty price tags. An hour for a private lesson can cost $75 or more and a quality racquet costs around $200. The fees alone can overwhelm many minority groups.

“40 Love is definitely trying to change that narrative. We are trying to bridge that gap in every aspect of the sport and in a child’s life,” Obih says. “We never want a child to not do anything due to finances or any other differences they may have. Our foundation is trying to do the heavy lifting behind the scenes in order to conquer any obstacles these kids may face. We want to be there to help them and be there to support in any way possible.”

Read the full column by Jordaan Sanford at Tennis.com.