The Greatest Rivalry in Tennis is... Not Who You Think - USTA Southern California
Adaptive News

The Greatest Rivalry in Tennis is… Not Who You Think 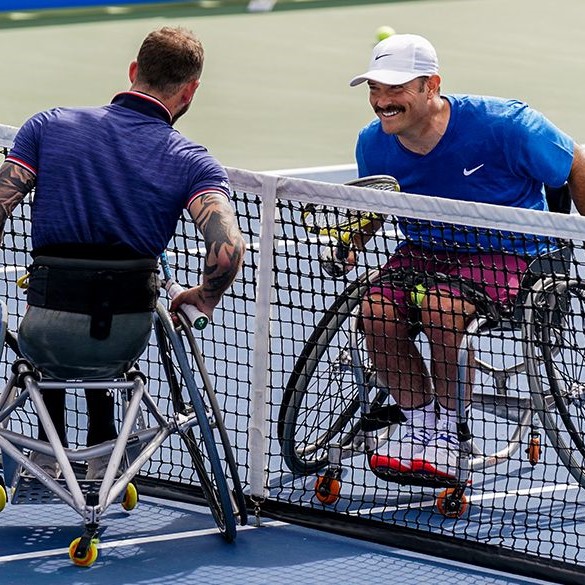 Tennis has its share of storied rivalries, some fierce and others gentlemanly. Jimmy Connors and John McEnroe defined the competitiveness of the men’s game in the 1980s as Chris Evert and Martina Navratilova battled for the top spot in women’s tennis. Today, Roger and Rafa compete not just to be the best of their generation, but the best of all time.

Yet one could argue that the greatest rivalry in today’s game is in Wheelchair Tennis, between two players who have flat-out dominated the sport for years. From the Slams to the Paralympic Games, SoCal’s David Wagner and Australia’s Dylan Alcott are as closely contested as it gets.

Wagner, born in Fullerton, is a six-time major singles champion with 18 more doubles titles to his credit. Of those 24 championship finals, Wagner and Alcott have met in all but six of them. The 46-year old has also proven to be a legendary doubles player, garnering a trifecta of Paralympic golds, nine US Open titles, and eight Aussie championships. In 2019, he won the French Open doubles title leaving only Wimbledon to conquer for a career Slam.

To his credit, Alcott is an athletic powerhouse. While Wagner is the perennial winner in dubs, the 29-year old from Melbourne has owned singles play since he turned pro in 2014. His win over Wagner at Wimbledon gave Alcott a career Slam in singles, capped by sweeping all of the doubles majors in 2019. Tennis aside, Alcott is also a World All-Star and Paralympic basketball player.

By comparison, Evert and Navratilova met 14 times in major singles finals. Federer opposed Nadal in nine, and believe it or not, Jimbo and Johnny Mac only battled through two Grand Slam finals on opposite sides of the court.

Along with Britain’s Andy Lapthorne (World #2) and the Netherlands’ Sam Schroder (#4), Wagner and Alcott will vie for the 2020 US Open Quads crown. In sum total, they have amassed 39 Slam singles and doubles titles, with number 40 up for grabs this week. The men will also have their sights set on Tokyo and the rescheduled Olympic Games in July. In Japan, Alcott will be the defending Quads doubles gold medalist while Wagner seeks to improve on his 2016 silver medal.

It sounds like there’s another chapter (or two) soon to be written on the greatest rivalry in tennis.