This is… Chula Vista’s Adrien Abarca 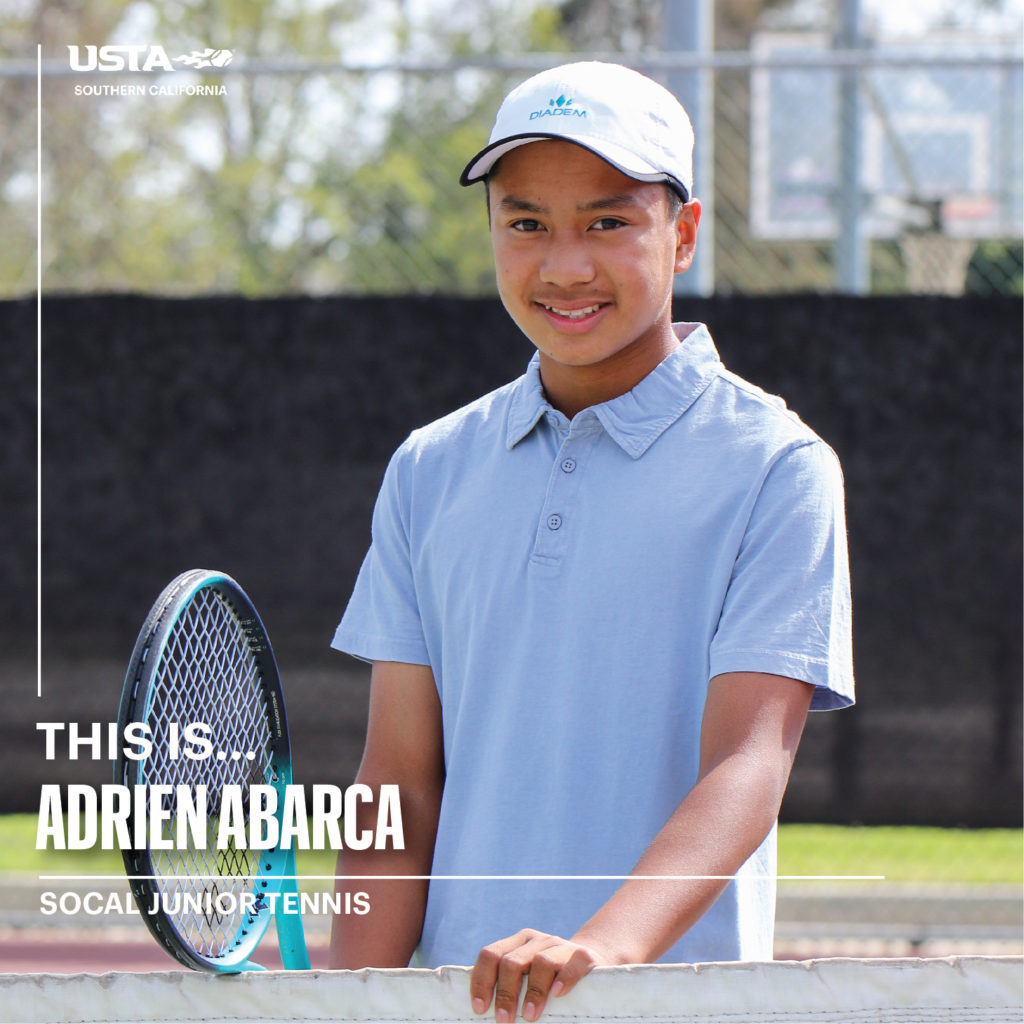 Having already played all over the world at a young age, Adrien ‘AJ’ Abarca has had a far more varied tennis experience than most players his age. Despite his experience and his success in the sport at age thirteen, Abarca has a firm head on his shoulders and a steady set of targets for himself as he grows and continues his journey in tennis.

“I started when I was 5 years old in Japan,” Abarca recalls, “My dad was stationed there because he was in the Air Force. It was a family sport, and my dad started playing, and then my brother… I would always go to the lessons and watch, I got into tennis after that.”

Abarca was exposed to the sport from age five and immediately had a desire to start playing. From Japan, Abarca and his family then moved to Hawaii, where he continued to play tennis as well as started to play other sports. “When I was in Japan, I was kind of playing for fun,” he said. “My dad got stationed in Hawaii and I did a lot more team sports and I made a lot more friends and I started playing more tournaments there in Hawaii.”

Playing in Hawaii is where Abarca became more accustomed to competitive tennis and playing in tournaments. In Hawaii is also where Abarca found that he made a lot of his friends through the sport. “It was really fun, and I really like making friends from it. I like the traveling, too,” said Abarca.

Abarca’s travels continued as he and his family eventually moved to Southern California, introducing the young player to a whole other world of tennis and a completely different style of play. Abarca was incisive in looking at how his tennis has changed when moving to SoCal, finding that he was able to grow more here. “There were a lot more different styles of play. In Hawaii, I played a lot of the same people,” he reminisced. “Here, I play a lot of different people with different play styles.”

Abarca has had the chance to play across the country in his career and has found success as well. The thirteen-year-old has played both singles and doubles, and when asked about some of his favorite memories and tournaments he has played in, he had no shortage of options. “I really liked the Orange Bowl. And when I won my first gold ball in doubles at Indoor Nationals. And I really liked going to Nationals too,” he explained.

Abarca isn’t shy about his desire to play tennis professionally, and with such a goal in mind, Abarca has some respectable role models that inspire him. “I like Federer and Nadal the most because they have a really good mental game and they’re always fighting for each point. They never really give up.”

Abarca appreciates every aspect of the sport, on the court and off it. “I really like the competition and I really like making new friends and traveling around the world,” said Abarca. Even through his experiences across the world, Abarca was clear in his favorite place on the planet to play tennis.

“I like it here the most because it has really good weather here,” he said, grateful for his community here in SoCal, being sure to mention those that have helped him. “I wanted to be sure to give thanks to Mountain View Sports and Racquet Club in South San Diego. It’s my second home. Their mission is to help serve our underprivileged youth, like myself, and allow us to shine.  I wanted to show kids that don’t have resources,  that with hard work and cool places like Mountain View, they too can succeed!”

With a humble and thoughtful attitude towards his place and his journey in the world of tennis, Abarca has clearly found his path here in Southern California and with perfect weather and perfect competition, the youngster has the world at his fingertips.