This Is… Bakersfield’s Eddie Corley 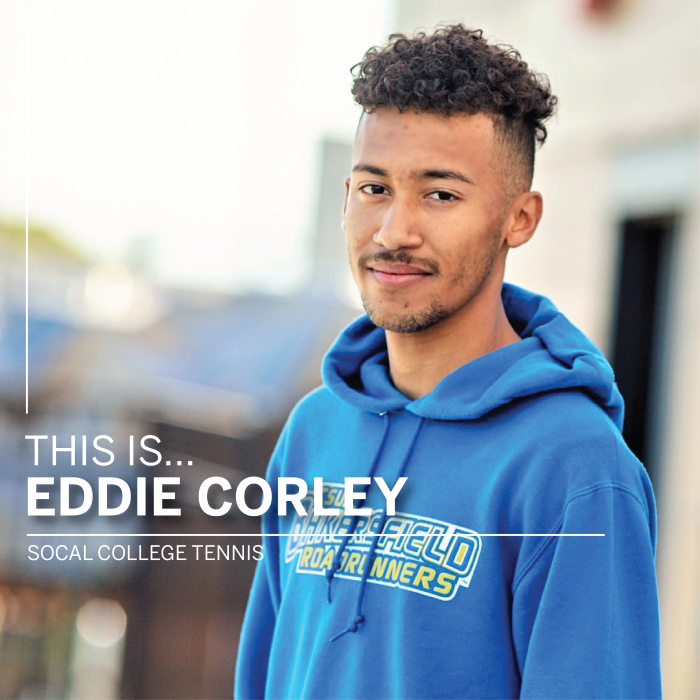 The CSU Bakersfield tennis program was discontinued in 2012, but that didn’t deter an upstart group of players from congregating on the campus tennis courts, ultimately forming their own USTA Tennis on Campus (TOC) club team. Eddie Corley is one of those players, one who gets the most out of what TOC offers thousands of students nationwide.

Originally from North Carolina but raised in Bakersfield, Corley was tired of simply commuting to class and then returning home every day, so he turned to tennis as an opportunity to stay engaged on campus and revisit the sport he’d once enjoyed.

“I decided to see if there was a tennis club because I missed playing the sport,” Corley says. “I joined the CSUB tennis club at the start of my second semester of freshman year. The club was very new, seeing that there were only about four or five members. We tried getting the club’s name out everywhere, and soon enough USTA invited our club to attend many TOC tournaments throughout the semester.”

It was a pivotal moment for Corley, who considers the social interactions and competition as the most rewarding facets of the TOC experience. “It’s a great way to challenge yourself against other very talented tennis players,” he says, “while also getting to know them and hangout with them. TOC is all about having a good time, at the end of the day, and those experiences have been some of the most priceless, enjoyable moments in my life.”

Corley, one of five siblings, first picked up the game at the suggestion of his mother, who noticed Corley has not adopted any extracurricular activities during high school. In his junior year, he finally gave it a shot.

“I became invested with the game because of the intense, fast-paced action, and the challenges it brings to the mind,” Corley says of his entry into the sport. “I love challenging myself and tennis puts you in situations where you have to think on your toes.”

He credits family values as the driving force behind not just his competitiveness, but also his likability among peers.

“As I grew up, my father instilled in me to do everything to the best of my ability and with hard work and repetition,” Corley says. “He also taught me to treat others the way I want to be treated. That is why I always carry a positive and respectful attitude towards everyone.”

In tennis, Corley has an outlet all his own – a solemn place that brings out the best in this scholar-athlete.

“When I am on the court playing tennis, I have no worries,” he says. “I feel free of any distractions in my life, or (in) the world, and can just focus on the excitement of the game and having a fun time with my friends. It’s like a bird being set free from a cage.”

Visit our College Tennis section, featuring Eddie Corley in September, and follow our “This Is…” player profile series regularly at USTAsocal.com.