This Is… Costa Mesa’s Hank Lloyd 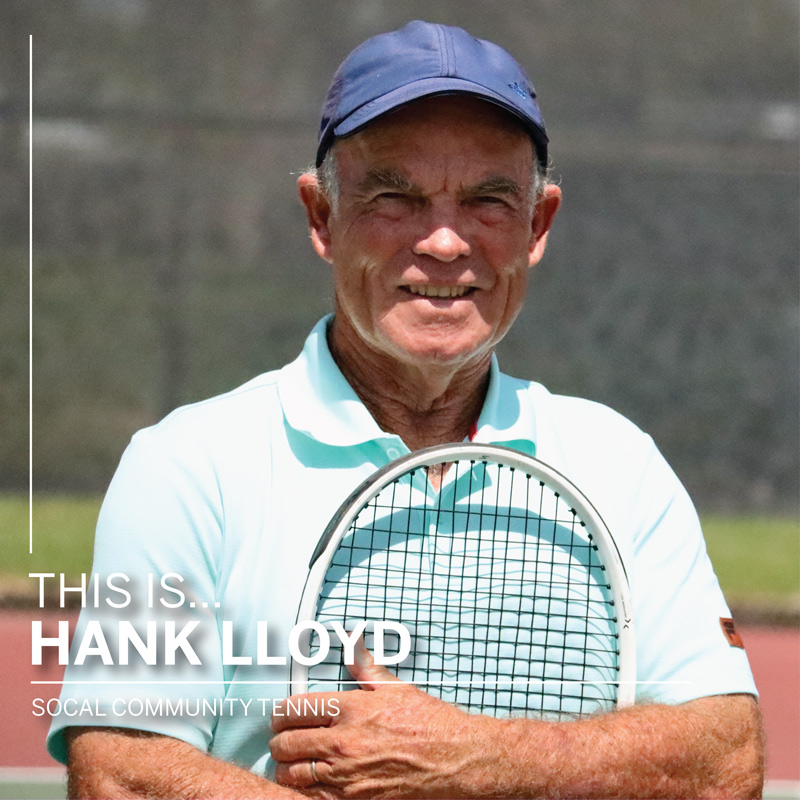 Hank Lloyd is a man on the move. From a coaching session at Costa Mesa Tennis Center to running youngsters around the court with drills, it’s hard to catch up with this 71-year-young spark plug.

In fact, September used to be the busiest time of the year in Costa Mesa. For more than twenty seasons, Lloyd was the man responsible for the Costa Mesa $15,000 USTA Pro Circuit Futures event that offered young aspiring professionals a start on the road to larger ATP events, and ultimately the Grand Slams. With those tournaments on the pandemic shelf, Lloyd continues to serve up wit and wisdom to SoCal’s tennis community.

While he has run the tennis operations at Costa Mesa TC since 1998, Lloyd has spent his entire life in tennis, first learning the game as a youngster growing up in Fullerton. He played his college tennis at San Jose State and worked for clubs at Canyon Crest and Anaheim before forming Hank Lloyd’s Tennis in 1983. With a father-in-law in the retail business, Lloyd spent the 1980s and 1990s operating up to five tennis shops from San Diego to Fountain Valley and still maintains a pro shop at Costa Mesa Tennis Center where players can try on shoes and demo racquets.

“We’re trying to innovate a little bit with what we do on the court because times have changed,” said Lloyd. “We are seeing more people getting into the game since COVID as tennis is a great way of getting exercise and staying active.”

Lloyd’s two adult boys Tom and Scott grew up in the game of tennis, both attending the University of Arizona and contributing to the men’s team in Tucson. Tom Lloyd is currently the successful head men’s coach at Loyola Marymount, the same school Hank’s wife and Tom’s mother Maureen attended.

“I have been very fortunate to spend my life in tennis,” said Lloyd, who had taught clinics at U.S. Embassy locations in such places as Sri Lanka, Sierra Leone, Bangkok and Thailand. While Lloyd counts those trips overseas among his greatest memories in tennis, he said coaching Competition Training Center 14-and-Under teams for the USTA SoCal section rank up there, as well.

As for the Pro Futures, this Orange County tennis legend anticipates their return in the near future, if only to again bring high-level pro tennis to the parks and recreation audience.

“It was just a great setting for Southern California and the entire tennis community,” said Lloyd. “There’s something about bringing pro tennis to a public park… it was something the City of Costa Mesa was very proud of. The fans came out and would watch, and it would stay with them and they would follow the players thereafter.

“Taylor (Fritz) actually had a great breakthrough here winning the qualifying tournament,” Lloyd recalled, conjuring up names like Sam Querrey, Bradley Klahn, Marcos Giron, and Steve Johnson as local competitors who passed through Costa Mesa Pro Futures. “I believe Taylor lost in the quarterfinals, but it was before his big breakthrough winning at the Challenger level and then onto the pros.”

Still active teaching four to five hours a day, Lloyd knows there will be a point in time in the future where he will have to pull back on the amount of hours on the court.

“I’m thinking about slowing down a bit,” said Lloyd. “Just seeing the sunset and spending more time with my family and enjoying my grandkids. It’s tough. It’s frustrating because I can’t imagine doing anything else. I love working with the kids and parents and guys like young pro Isaiah Strode, who recently thanked me for putting on events and saying players like him wouldn’t have otherwise had the opportunity to experience the tournament without our event. I really couldn’t imagine doing anything else.”