This Is… Pasadena’s Esther Hendershott 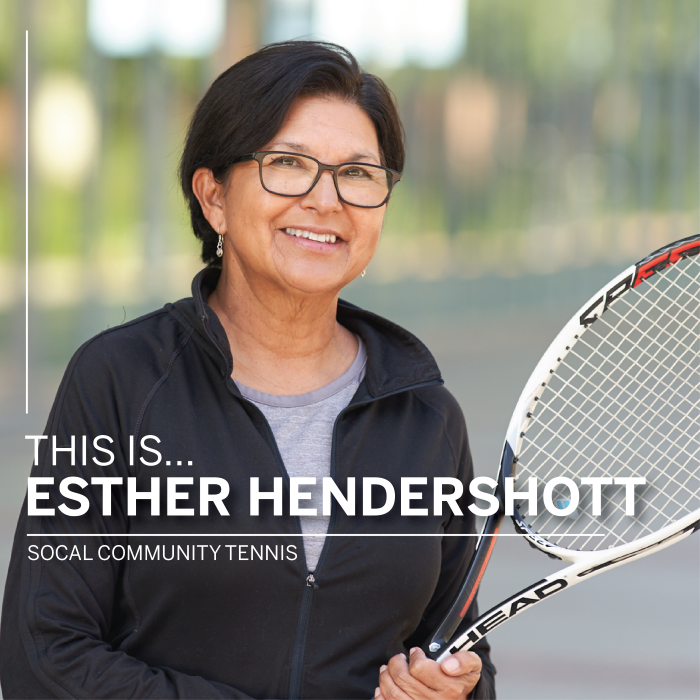 Somewhere out there is the next great tennis phenom, the next young girl or boy to grow up in Southern California and one day hoist the US Open trophy. But what about the other kids, the ones who just like to swing at the ball, learn a few tricks, and simply enjoy playing the game without the pressure to be the best?

That’s what brought Esther Hendershott to the forefront of tennis in Pasadena. Today, as Executive Director of the Pasadena Tennis Association, Hendershott is determined to welcome youngsters into the sport of tennis, regardless of whether or not a Grand Slam title lies in their future.

Hendershott’s son was eight years old when he expressed an interest in learning tennis, just as his mother had learned as a child alongside her siblings. But after enrolling him in a tennis clinic, Hendershott was struck by the imbalance of attention that favored talented players over those who played recreationally.

“My son was learning,” she recalls, “but I noticed not all of the coaches had the patience to teach beginner level children. I also noticed the lack of diversity. Shortly afterwards I got involved in a new tennis facility in Pasadena and ran a small pro shop. I was excited about this new venture but I was new to the business of tennis and the sport and wanted to learn more. I saw and heard things that didn’t make sense and were hurting the sport. The venture wasn’t a good fit for me. That’s when I decided to form the Pasadena Tennis Association.”

That was 1997, when the association launched as a non-profit organization to provide tennis classes and summer camps. Housed at Blair High School, the Pasadena Tennis Association continues to grow, partnering with the local school district and Pasadena Educational Foundation to enhance programming and reach more and more local children.

Hendershott appointed a first-time tennis coach to spearhead programming, one who “didn’t have the big ego of other coaches who were only about working with tournament players,” she said. “He had patience and was excited to work with kids.”

In short time, Hendershott found herself on court as well, surrounded by eager learners.

“It’s so much easier to work with players who can play but to teach someone totally new to the sport and watch their progress is far more gratifying,” she says. “It takes patience, repetition, and a lot of fun has to go into the lesson.”

One such player is Austin, an autistic boy who excelled in private classes but welcomed the challenge of group learning under the watchful eye of Hendershott and her team.

“Austin wanted more from tennis,” Hendershott says. “I told him he was good enough to join a class and he did! But, that wasn’t good enough for Austin. He wanted to hit a big ball and serve big like the older tournament players.” Austin paired up with a tennis pro to get first-hand instruction on controlling the power game, which he adopted quickly. “It’s great to see our tennis family of coaches and players embrace Austin and his quest to be a good tennis player. His story makes me so proud of him and proud to be a part of his tennis journey.”

Still, there are plenty of young people to engage with tennis, many who have never held a racquet or been afforded the opportunity to be educated about the sport and all of its benefits.

“Tennis is an expensive sport,” admits Hendershott. “We can reach more new families by lowering the cost of lessons, tournament fees and training. Not all tennis providers can afford to lower the cost of their programs. I get that. But, we can all do our part to offer some form of low cost tennis to grow our sport and some form of low cost tournament fees that will give Black and Brown youth the equal opportunity to compete at all levels of the game. It can be done.”

In making tennis more accessible, Hendershott believes the game will surge within a more diverse population, and a stronger emphasis on teamwork among providers across Southern California.

“Every program offers something different and/or unique,” she says. “We all have our weaknesses and strengths. Be supportive and respectful of each other’s efforts to grow our sport. Let’s be about growing our sport to as many different people as possible.”

Learn more about the Pasadena Tennis Association at tennispasadena.com.

Visit our Community Tennis section, featuring Esther Hendershott in August, and follow our “This Is…” player profile series regularly at USTAsocal.com.