This is… Marie Osborn 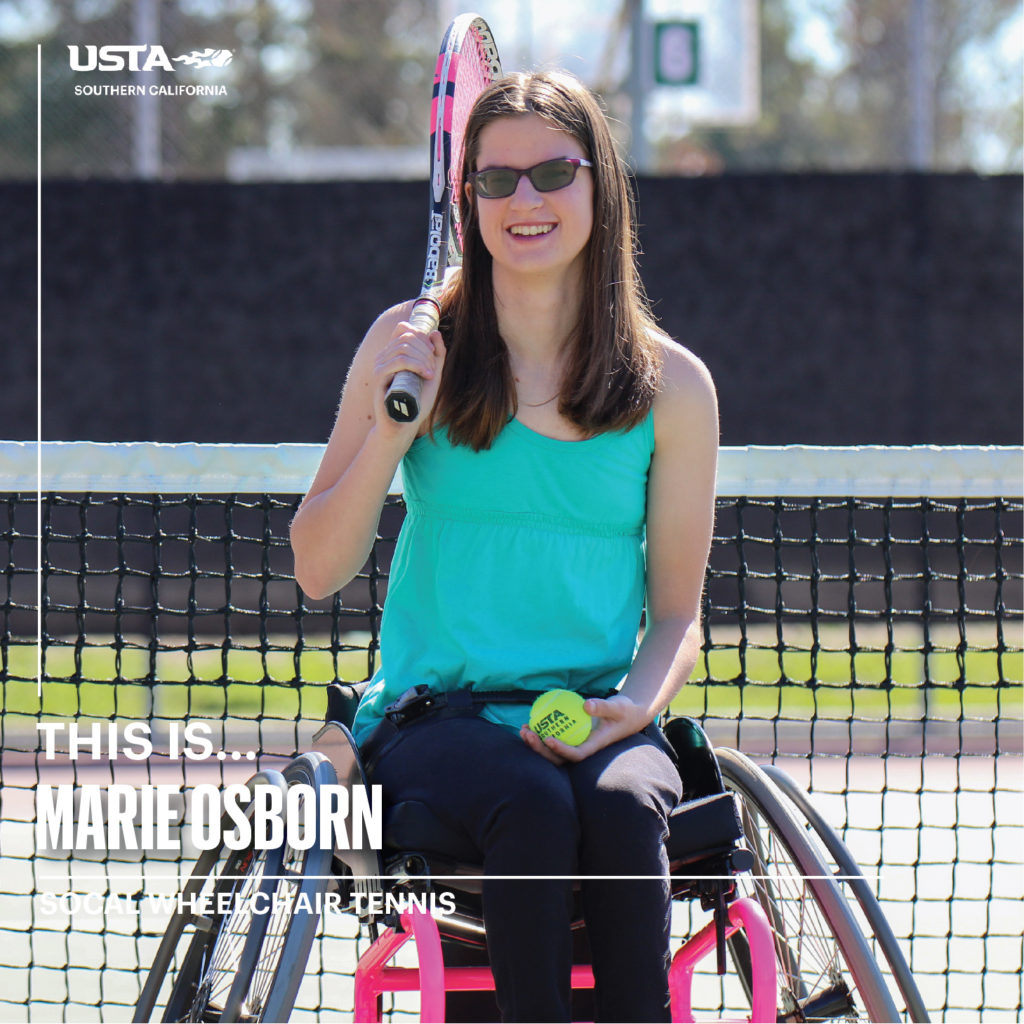 “She’s legally blind in her right eye, so I didn’t think she’d see the ball,” said Heather Osborn about her daughter, Marie Osborn. Aside from that, Marie Osborn certainly has had more hurdles to overcome. Being the only wheelchair player in her district, Marie has had to fight pushback from others her whole life in order to pursue her love for tennis.

Originally, Heather Osborn wanted her daughter to play Basketball, however, Marie saw the sport of tennis and wanted to give it a try. While her mother was apprehensive at first, Marie had the chance to take part in a clinic run by the Challenged Athletes Foundation, with legendary wheelchair tennis player, David Wagner.

“She jumped in with him and she hit every ball, she loved it,” explained Heather. Immediately following this, Marie attended more tennis clinics, including with Angel City Games and West Coast Tennis, allowing her to play more and more until eventually, she decided to try out for her high school tennis team.

Initially, Marie was told that she wasn’t even allowed to try out as her high school considered it a liability. However, Marie and her mother took matters into their own hands, creating a video of Marie playing tennis to turn the school board and rightfully give Marie the chance to try out and play tennis for her school.

“After the first year, everybody knew. We were the team with the girl in the wheelchair.” Marie found as she started high school play that some teams would aim every ball at her, however even this didn’t stop her as she played all throughout high school against able-bodied players the whole time. Marie mostly played Doubles throughout her high school career, but did venture into singles competition every now and then.

The challenges of being a wheelchair player also extended to on the court itself as well. “My wheels popped!” Marie laughed about her first time playing at a certain school, experiencing an issue that most tennis players might never think of. Marie and her mother joked about the patch job that they had to do to keep her wheelchair going that day. Marie talked about her wheels popping at practice another time, saying “It sounded like a gunshot! The other girls were terrified.” Marie has since used solid polyurethane wheels to solve that issue, but Heather did remark that at first, there were a lot of little things that they couldn’t have predicted would pop up for them to tackle.

Heather and Marie found that as they continued to play tennis that everyone in the community was supportive of them. “She played every set, every time… She was out there for three hours playing. They needed her, because they didn’t have enough girls.” Marie had a different coach every year and talked about every coach being amazing, with Marie receiving an award for ‘Most Heart’ every year. Marie even earned her varsity letter, something which her mother never thought was possible.

When asked what it is about the sport of tennis that kept Marie involved and passionate and eager to continue playing she was instant and resolute with her answer: “It was honestly just how nice the community was. And honestly, it was just a lot of fun!” Heather was especially quick to mention how much fun Marie had playing in the tournaments hosted by Biola University tennis coach and esteemed provider of wheelchair tennis, Dee Henry: “Her smile when she plays, when she hits that ball, it’s huge!”

Marie’s ambitions don’t stop at just tennis however, with Marie also having competed in Track and Shotput during high school, with the intention of continuing to participate in both as well as continuing her tennis journey. Marie is decidedly content with her future plans in the sport, saying “I’m competitive a little bit when we want to play a fun little match or a game, but not seriously competitive.” Marie is happy with the direction of her tennis journey, having earned the respect of her community in high school and saying “I’m honestly just trying to do it for fun!” Everything about Marie’s demeanor beamed with pride and excitement to continue playing tennis as much as she can.

Marie’s story is one of continually winning people over. From convincing her mother that tennis is the right sport for her, to plowing her own path against opposition in high school and earning her place in the Southern California tennis community. Marie has flown by every obstacle in her way and with her racquet in hand, keeps on rolling, on her own self-made highway, with Team SoCal behind her.