This is… Riverside’s Jeselle Ante 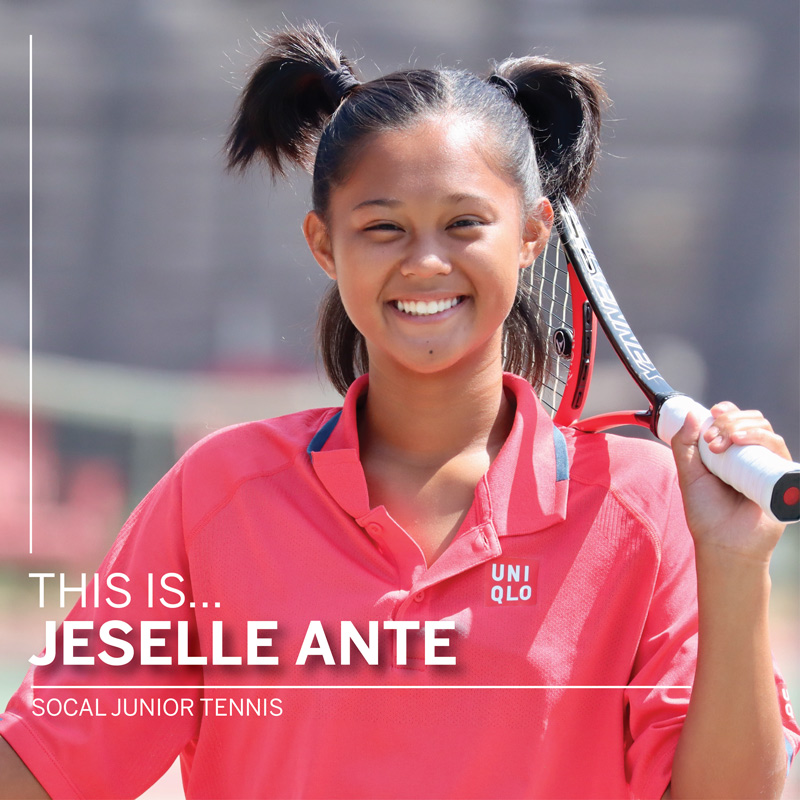 Riverside’s Jeselle Ante wants to be a tennis player when she grows up – and she knows that’s sooner than later. Currently inside the Top 20 on Babolat’s California recruitment rankings list, Ante has put together a solid run in the past year, reaching the Woody Hunt 18s semifinals and the quarters at Sectionals last summer before earning a spot in the main draw at the USTA Girls 16s/18s Nationals.

With high expectations and lofty goals, the 15-year old is the fourth sister in a family of tennis siblings. She remembers roaming onto the court as youngster, eager to join in the family fun. “I feel like I was born to play tennis,” Ante said between matches at the SoCal Open Sectionals in San Diego. “I’ve always felt at home with tennis.”

As her game grew more serious, Ante concedes that some of the fun was overshadowed by competing for points, ranking, college standing, and other external factors. Her goal more recently – during which she’s played spirited tennis – has been to rekindle her love and enjoyment of the sport.

A decade after she first lifted a racquet, Ante maintains her dream of becoming one of the few professional tennis player of Filipino lineage, a goal she will tackle in due time. Originally, she’d hoped to feed directly into the pro circuit a la Martina Hingis, but as Ante approaches college eligibility, the idea of playing collegiate ball has grown on her. “I’m planning to go to college, and choose colleges that maneuver me into pro tennis, just like other pros did.”

Ante’s recent streak of success, perhaps not surprisingly, comes on the heels of a difficult time in her life. At the height of the pandemic, Ante’s mother – a health care professional working the front line against COVID-19 – succumbed to the virus after a lengthy and courageous battle.

“My mom knew how to fight, and she taught me that,” Ante said. “In tennis, you have to be stubborn. You have to fight for yourself on the court.”

Despite the weight of her loss, Ante still presents a colorful, happy-go-lucky persona. Her pigtails and colorful attire help her stand out from the rest, and she understands that her ability to excel in tennis is directly related to how much she enjoys the game. “If you have fun doing what you’re doing,” she affirms, “you’re actually going to succeed.”