This is… San Diego’s Jeffrey Lee 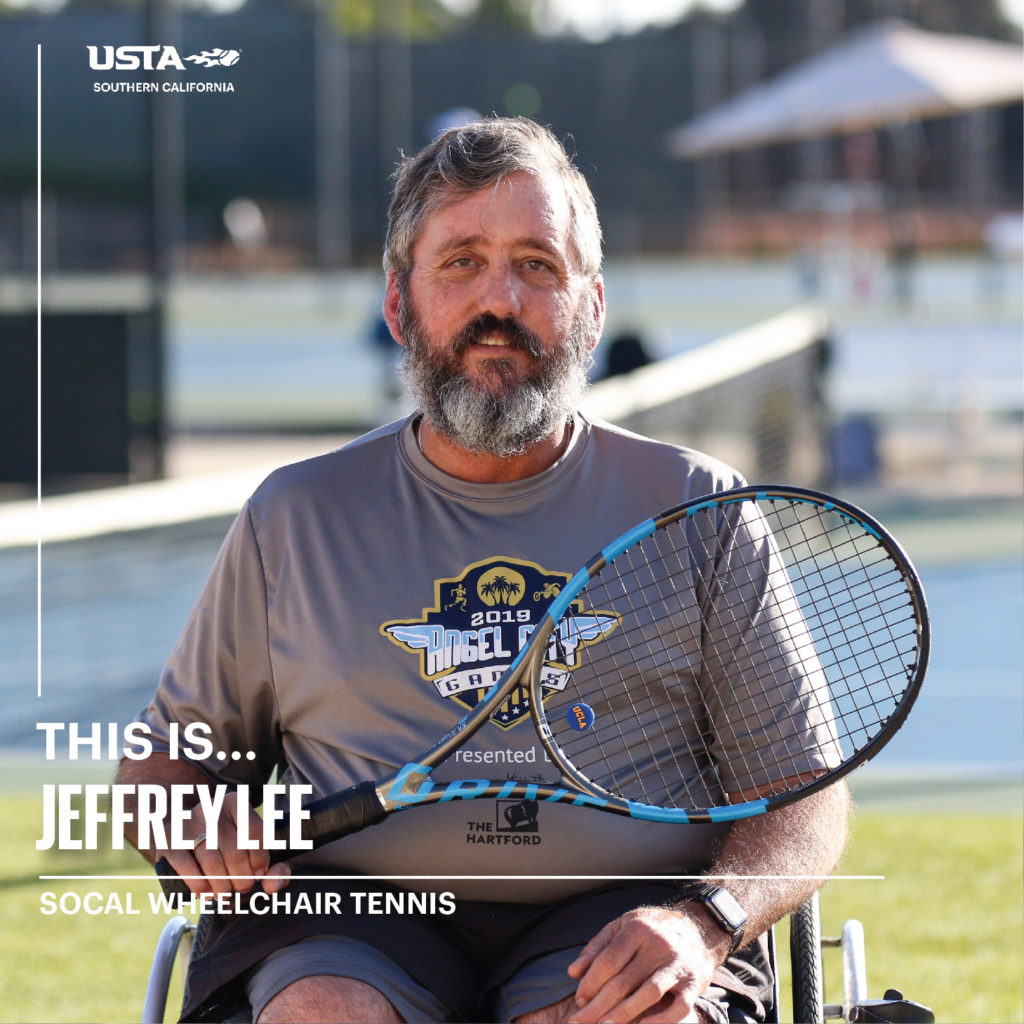 Jeffrey Lee of San Diego County had a twenty-year gap between tennis matches. Having played the sport as a hobby with his wife many years ago, he was unable to pick it up regularly due to his condition of Osteogenesis Imperfecta (O.I.) Many years later, as his condition worsened and Lee made the decision to use a wheelchair, he found himself drawn to tennis again. This time, it was Jeffrey’s son that encouraged him to start playing wheelchair tennis, and eight years later, Jeffrey is all-in with his second turn with the sport.

Jeffrey was not completely new to racquet sports when he tried to get into tennis in his twenties, having played racquetball in college, however his disability made it difficult for him to excel in the sport. O.I. leads to easily broken bones, which is why Jeffrey uses a wheelchair now, however this was not always the case as he explained. “I have a disability that people with it, at least at my level, can go through periods of time where we’re sort of able bodied, or at least pretend we are,” said Jeffrey. While Jeffrey was able to try playing tennis, his body couldn’t take the intensity at that time, so he gave it up. Many years later, Jeffrey’s son Andrew, who also has O.I., entered a wheelchair tennis tournament at Barnes Tennis Center, prompting Jeffrey’s renewed interest in the sport.

“It was such a fascinating sport,” said Jeffrey. “I hadn’t played a racquet sport in years because I couldn’t really walk very well at all. So, watching my son play in a wheelchair tennis tournament was cool!” Jeffrey’s amazing twenty-year gap between stints with a racquet didn’t damper his competitive spirit, and he quickly signed up to play at Indian Wells. “I started out playing the C division at Indian Wells,” said Jeffrey. “I won first in singles and second in doubles! I decided to move up to A and that has been challenging because the people at the top end of the A division are really good.”

Jeffrey sees the opportunities in adaptive sports these days as a great improvement from when he was a kid. “The common wisdom in most schools was sports is out of the question,” explained Jeffrey about his childhood. “Now you can get out there to Indian Wells, playing at one of the finest facilities in the in the world. This is totally awesome.” Jeffrey has been encouraged by the greatly increasing opportunities to play adaptive sports, and the message that this sends to athletes of all kinds. “When I was growing up the common wisdom in most schools was, you’re in a wheelchair so sports are out of the question.”

Adaptive tennis is markedly different from other adaptive sports in a few ways that Jeffrey appreciates, especially the fact that wheelchair players can play against non-wheelchair players. “I have an opportunity to play sports with my whole friend community,” Jeffrey exclaimed. “Not just the ones that happen to be disabled. So cool!”

The state of adaptive tennis is continually improving as well, including the fact that for the first time in 93 years, the San Diego District Championships in August will host a wheelchair division. The US Open will also be expanding their wheelchair involvement, with Junior Divisions now involved as well as an expanded player pool. While Jeffrey aspires to play at a higher level, his first goal is to consistently beat his son. “My goal is to stop losing to him,” laughed Jeffrey. Whether it’s against his son, or one day at the US Open or Wimbledon, Jeffrey’s path in tennis is clear, “My goal is to play as much as I can!”