This is… University of San Diego’s Nadia Abdala 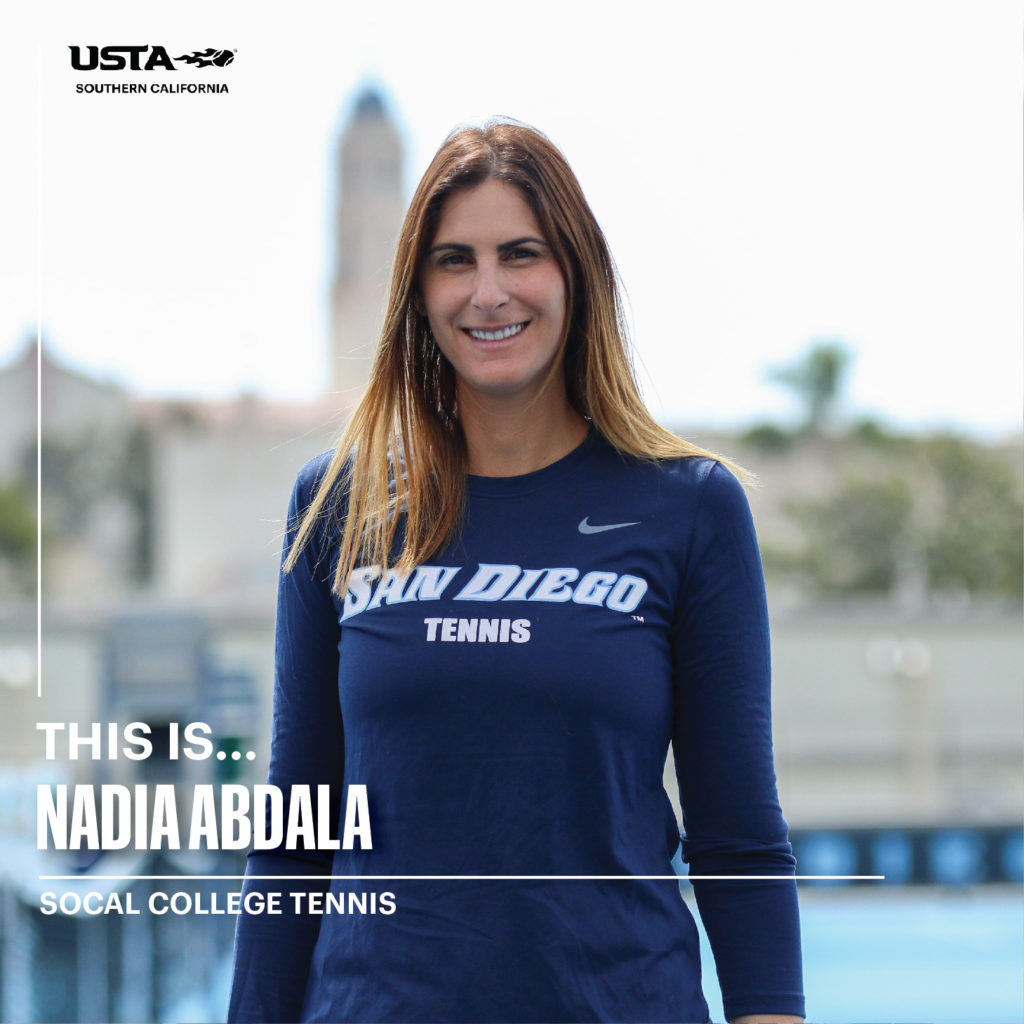 After eight years as an Assistant Coach at the University of San Diego, Nadia Abdala was named Head Coach of the Toreros in June 2022. The Mexico City native started her career at age four, influenced by her mother who was a huge tennis fan. Despite growing up in soccer crazy Mexico, Nadia defied the norm and stuck with tennis. Alongside her sister, Nadia drove steadfast towards a life of tennis, from the junior level all the way to a Head Coaching position at an elite D1 program. Speaking about what got her started, Nadia had her parents to thank, saying “I guess because of their passion, I fell in love with the sport too.”

After playing in her first tournament at eight years old, Nadia’s competitive spirit was awakened, and she had her sights set on playing tennis as a professional. With her mother and older sister, Nadia moved to the United States as a child to make use of the greater opportunities in tennis and get better. Nadia cites being especially influenced by Jennifer Capriati, having had the chance to see her play many times in Costa Mesa.

Nadia’s older sister eventually committed to play at Arizona State, a path that Nadia herself didn’t initially see in her future, however a wrist injury at that time led to her changing her mind. Out on the sidelines and unable to continue playing in professional tournaments for a little bit, Nadia visited her sister at ASU at the request of the coach and found that her sister had improved greatly in just three months. Nadia was convinced, became a Sun Devil herself, and played for four years at Arizona State even ranking as high #11 in doubles and #20 in singles.

Despite challenges, Nadia looks back at her time at ASU as a defining period in her life. “I came in, I barely spoke English, so I think for me it was a growth experience in every single way,” she said. “It was a very elite program and there was a lot of discipline and ambition. That’s what I needed then.” Despite gaining a lot from her time in college, Nadia had no intention of becoming a coach herself. Nadia played on tour for two years after college but was forced to retire due to a shoulder injury.

Nadia took a break from tennis, working a marketing job and drifting away from the sport for a few months, however the sport would call her back. A former ASU teammate recommended Nadia take up a job coaching at a school in La Jolla, and Nadia took to it, albeit unexpectedly. “I never intended to be a coach,” explained Nadia. “Never in my life did I think I was going to be a coach, but I started working there part time, and I liked it so much. Naturally, I’m a helper, even on a team I always like to help people. So, I think coaching came very natural to me and obviously, being back on the court, rekindled the passion for tennis.”

Nadia found the motivation to coach at a higher level, and when the Assistant Coach job was posted at USD, she had to jump on it. Nadia credits the job for giving her a new perspective on tennis, saying “I think it gave me a big sense of respect. I expected people to get things really fast. That’s when I saw why coaching is so challenging, you have to be patient.” Nadia has found a lot of success at USD, the school is currently a top 35 program in the nation, and she is a three-time Southwest Region Assistant Coach of the Year.

Outside of her job as a coach, Nadia is also heavily involved in the San Diego tennis community and is one of the founders of ‘Latina Tennis Coach.’ The organization is focused on women’s empowerment, especially for Latina members of the tennis community. Latina Tennis Coach runs workshops and acts as a support system for Latina women who are looking to find a place in tennis in Southern California.

“I’m a big believer in bringing tennis to the most marginalized communities,” explained Nadia. “It’s an expensive sport, but there’s also ways around it. For me, tennis was such a healthy environment, and I would like to share that and bring tennis to the communities that haven’t had that exposure.”

Nadia’s involvement with tennis has been anything but straightforward, moving across borders to create an opportunity for herself, and taking an unexpected route to college as a player and a coach. However, it is clear in her work that her passion for the sport is unrivaled. “I grew up because of tennis,” she said. “I met my husband on the tennis court. My closest and best relationships have come because of tennis. I am very grateful to the sport, and I want to share the sport just because it’s been so good to me.”

Nadia will appear among many other panelists at the USTA Women Who Ace Conference on August 5 in San Diego. Click the link for full details.