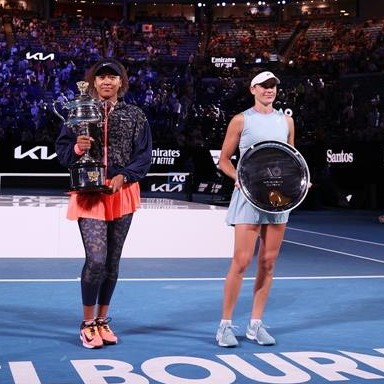 Jennifer Brady’s exceptional performance at the Australian Open continues her upward trend that started last fall around the US Open. The former UCLA Bruin met eventual champion Naomi Osaka in the women’s final at Melbourne, jumps from #24 to #13 in the WTA standings released Monday. Osaka, who trains out of Los Angeles, moves up a notch to #2. She last reached the top spot in 2019.

Former Bruins will span the globe this week led by Thousand Oaks’ Marcos Giron, who represents #TeamSoCal at the ATP Open Sud de France. Max Cressy is in the main draw at the ATP Singapore Open, and Mackenzie McDonald plays an ATP Challenger in Kazakhstan. Ernesto Escobedo (West Covina) is in qualifier action at the Cordoba Open in Argentina.

Look for Krawczyk/Guarachi to keep the momentum forward as they continue the swing Down Under at Adelaide, along with Asia Muhammad. Liu and Santa Barbara’s Kayla Day head to Boca Raton for the USTA Pro  Circuit / ITF World Tour event in Florida.