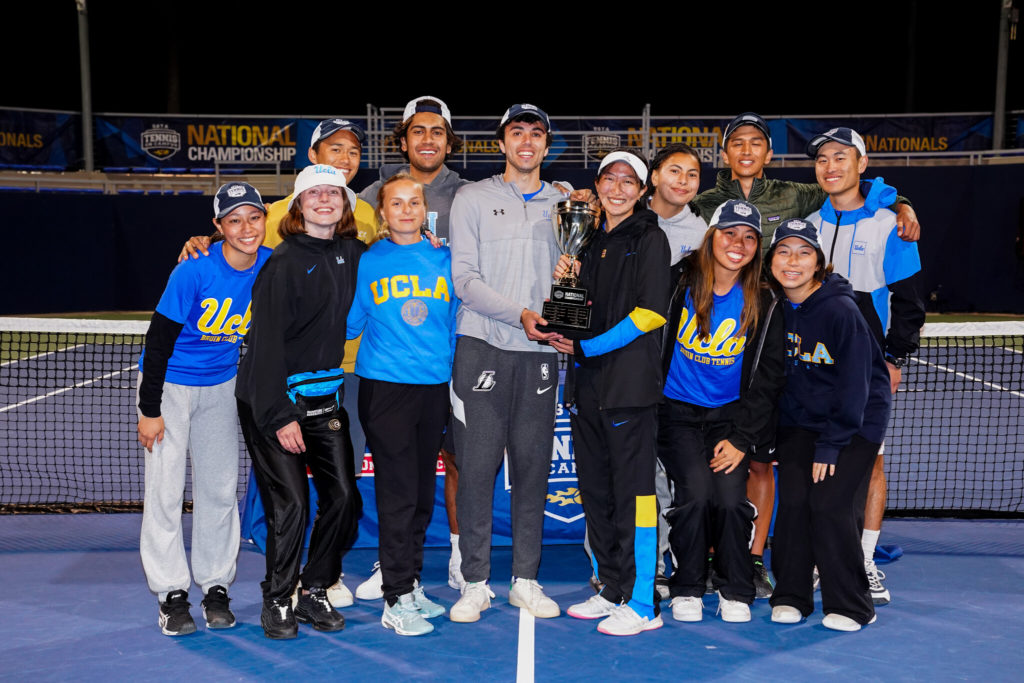 The UCLA Bruins were crowned Tennis On Campus national champions on Saturday at the USTA National Campus as they defeated the UC Berkeley in a rematch of the 2019 final. The win marked back-to-back titles for UCLA as the event was last held in 2019 due to the pandemic.

UCLA took an early lead as Devon Whelpley & Griffen Wolfe (San Clemente) earned a 6-4 win in men’s doubles over Nicholas Figueira (Arcadia) and Milad Shafaie. Wolfe would go on to defeat Berkeley’s Tyler Shihin a tiebreak in men’s singles to give the Bruins a 12-9 lead.

Jozephine Yen & Solia Valentine continued the UCLA momentum, winning the women’s doubles match, 6-3, over Tiffany Tang & Julia Marks before Valentine put the Bruins on the verge of victory with a 6-3 win in women’s singles over Arlina Shen to give UCLA a commanding 24-15 lead going into the decisive mixed doubles match.

California’s pair of Figueira & Marks cut the UCLA lead to 27-21 with a 6-3 win over Whelpley & Yen, and the World TeamTennis scoring format permitted the match to continue until either UCLA won another game or California tied the match. The Golden Bears managed to cut the lead to five before UCLA officially clinched their second consecutive title with a 28-22 win.

“We are so stoked to win the national championship,” said team captain Kaylee Kang. “It feels very rewarding to see all the hours we have put in on the court pay off in such a big way.”

Both teams, like most college club programs, were faced with a significant layoff due to the pandemic and were forced to almost entirely rebuild their rosters. But both team captains credited their newer members for creating a new team identity this season, limiting the pressure of repeating 2019’s results heading into the event.

“It helped that the team was composed of almost all newcomers, so they set expectations for themselves,” Kang said. “If there was any pressure, I don’t think anyone was really showing it.”

“The two players from the 2019 team helped with preparing the others for how the tournament worked,” echoed Wilson, “but because we didn’t want this year to be a repeat of 2019, I think the amount of newcomers we had actually helped us.”

This is UCLA’s third overall national title, while California remains at four, one shy of the record five held by Texas A&M.

The USTA Tennis On Campus program features more than 14,000 college students competing nationwide in intramural and intercollegiate coed club play. Since its inception in 2000, Tennis On Campus has grown significantly and today is played on more than 300 college campuses.

Developed by the USTA in partnership with NIRSA and World TeamTennis, the Tennis On Campus program gives college students the opportunity to build leadership skills, network in a coed sports environment and compete on a college team without the rigors of playing in a varsity program. With year-round match play and regional and national championship competition, students maintain active and healthy lifestyles through their college years.

Visit the USTASoCal Tennis On Campus page for information on club tennis programs throughout the Section.