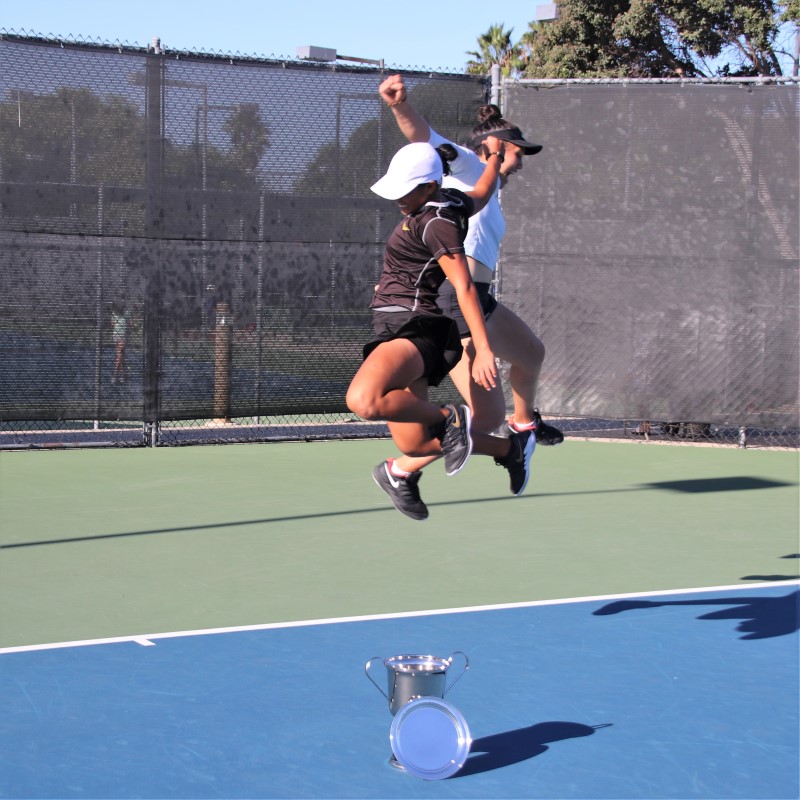 The final point conceded, the winner of the 2019 Oracle ITA Masters singles title Eryn Cayetano slowly walked to the net for an emotional hug, burying her head in the embrace of her opponent, best friend and roommate Angela Kulikov.

Reminiscent of Sloane Stephens and Madison Keys’ similar hug after the singles final of the 2017 US Open, the USC Trojan teammates look back fondly on their own title match, when then-freshman Cayetano’s posted the emotional win over senior Kulikov, which ended 12-10 in a deciding set 18 months ago.

“I think it was one of the really special and unforgettable moments,” said Kulikov. “I mean it’s pretty clear for anyone who’s been able to see a clip of the match to see what a special friendship we have. I just remember actually someone gave me the best advice before the match and it has nothing to do with tennis. It was just, ‘The only way that you can mess this up is if you don’t recognize how special this moment is and just enjoy it.’ And I think that’s the best thing that anyone has said to me about a tennis match in a while.”

“At the end of the day we just went to BJ’s and had a Pizookie to celebrate what a huge step that was for both of us,” said Cayetano, who naturally paid for the dessert outing from the winner’s purse.

Kulikov would have no problem snatching the bill and handling payment for another celebration outing if she and Cayetano and the rest of the Trojans can pull off a huge upset on Friday when USC visits arch-rival UCLA.

“Every year we get two shots at them and it is a rivalry we look forward to the most because we know it’s such a big deal for the university and we get to say who runs L.A. and all the pride that’s associated with it,” said Kulikov, who is just weeks away from completing has Master’s degree in Applied Psychology after graduating with a Bachelor’s degree in Cognitive Science.

The Trojans’ No. 1 doubles team of Kulikov and Cayetano were destined to be college teammates having first met more than 10 years ago at a training camp in at the USTA Training Center in Carson.

“I must have been six or seven years old,” Long Beach’s Cayetano recalled. “I saw how good she was and really wanted to be just like her. When USC started recruiting me Ang took me around campus and I said, ‘Wow, this is the place I want be,’ and with the people I want to be around to have a shot at doing something great.”

Kulikov, who grew up in Sun Valley, said as much as Cayetano looked up to her, the feeling was mutal. “I mean, I love this kid,” Kulikov said. “I remember us both being kiddos in Carson and how much I would rave about her to others. I used to call her my mini-me.”

The pair actually share a bunk bed in an apartment across the street from campus. “Yeah, the bunk bed situation; we get laughed at quite a bit for but it’s something I’m really grateful for,” Kulikov said.

Cayetano offered to take the top bunk. “I have to be the big girl and jump up there,” she said. “Plus, Ang is scared of heights.”

The Pac-12 Championships set for April 23-26 in San Diego will be Kulikov’s final collegiate match, unless the Trojans can somehow win it all and earn an automatic bid into the NCAAs.

As their roommate days come quickly to a close, Kulikov and Cayetano know they will always have that finals memory from the fall of 2020 to re-live.

“We have a cool projector and we re-watch the match on the projector and dissect each other’s tennis because we’re dorks like that,” Kulikov said. “We just crack up listening to some of the things the commentators say and joke about stuff that was running through our heads at different moments. It was just one of those things you can’t wait to come back to after 30 years and laugh about it again.”