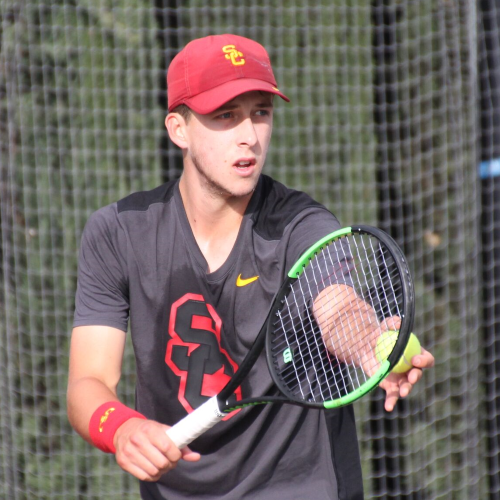 Four-time ITA All-American Brandon Holt will forgo the opportunity to return next season for a fifth year at University of Southern California, opting to end his tenure with the Trojans and launch his professional tennis career.

Holt, from Rolling Hills, Calif., was Pac-12 Player of the Year in 2019 and finished the season ranked #9 nationwide. Before play was halted in 2020, Holt was ranked at #24 in the country and was expected to be a major factor in USC’s charge for a national title. The Trojans were mainstays in the Pac-12 Championships at Ojai each year during Holt’s college career, winning twice. He previously won the 2016 USTA Southern California Intercollegiate Championships singles crown on his home court at David X. Marks Stadium.

A journey in professional tennis will not be completely foreign to Holt, the son of American tennis great and 1979 US Open champion Tracy Austin, who won the Grand Slam at age 16. Holt comes from a tennis family that includes former Wimbledon mixed doubles champion John Austin, notable pros Pam and Jeff Austin, and Long Beach State tennis standout Doug Austin.

The Austin/Holt connection is not the first to embark on the familial tennis circuit. Like Korda, Taylor Dent followed the footsteps of his father Phil, who reached the Australian Open final in 1974 against eventual winner Jimmy Connors. On the horizon, Martin Damm, Jr. is among the world’s top young juniors – his father won the US Open doubles title in 2006 with Leander Paes.

On his Instagram page, Holt acknowledged his teammates as the largest contributing factor to his success at USC. “Naturally, people talk about my success on the court at USC and view that as the reason I had such a great time,” he wrote. “My teammates are the number one reason I was so happy at USC. The single biggest success looking back is (former USC coach Peter Smith) recruiting GOOD PEOPLE. He recruited people I played tennis with for 4 years. But more importantly, he recruited a band of brothers who are and will continue to be my best friends.”