With his win at Super Sectionals, Snyder keeps getting better with age 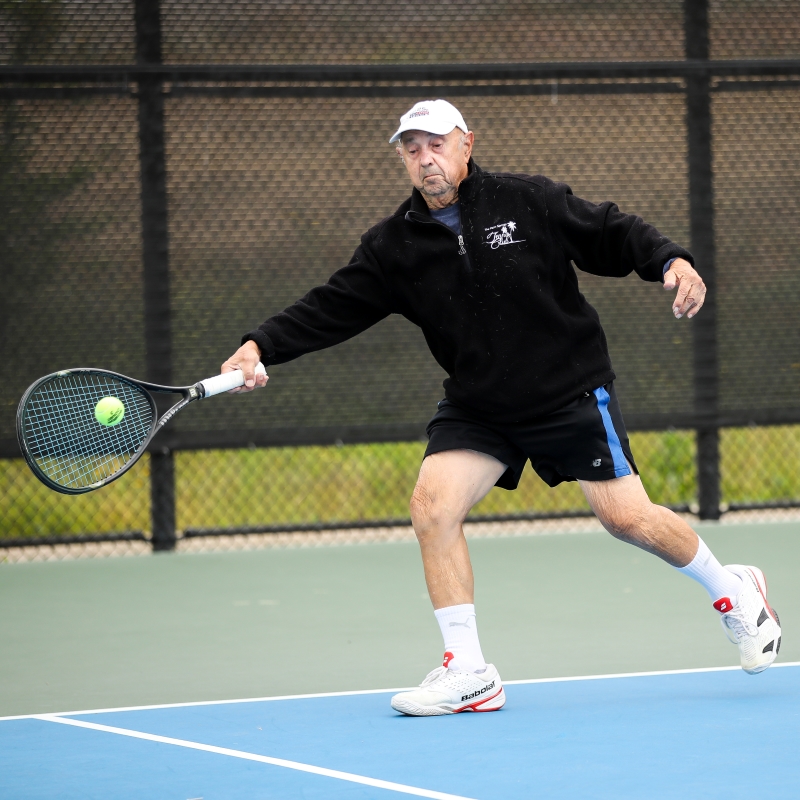 The older he gets, the better Saul Snyder seems to play.

Entered in his first tournament in more than a year, San Diego’s Snyder won the 85-and-over division at the USTA Southern California Super Sectionals on Wednesday at Great Park in Irvine.

The 88-year-old top-seeded Snyder rolled over No. 2 Seymour Moskowitz of Indian Wells, 6-2, 6-1, in the final after dispatching Jerry Robinson of San Juan Capistrano, 6-4, 6-0, in the first round.

“I have won against him before, but there have been times when he’s had match points against me,” said Snyder, who turns 89 in September, of Moskowitz. “He’s a tough little player and today wasn’t his day.”

Modesty and humility run deep with Snyder, who didn’t pick up senior-age tournament tennis until his 60s.

“Prior to that I had just played USTA League tennis or social tennis,” Snyder said. “I had a friend tell me, ‘You’re much better than you think you are.’ “

It wasn’t until a business partner of Snyder’s told him about the new carbon and titanium rackets that he switched from using his old wooden racket.

And he’s been winning ever since, once ranked as high as No. 2 in the nation in the 80s having won two USTA National Gold balls in one year by capturing the National Hardcourts and Clay Courts. Three times Snyder has been selected by the USTA to represent the U.S. in ITF world events traveling to Croatia twice and Turkey once. He has claimed one world title in mixed doubles and won the gold medal at the Maccabi Games in 1993.

Still more proof that Snyder’s game continues to improve as he gets older is a result against one of the world top senior players Herman Ahlers of Las Vegas, who is four years younger than Snyder at age 84. Having been beaten by Ahlers the first three times they played, Snyder was able to finally beat him the last time the two met.

“I rushed the net a little bit more and I tried to hit the ball harder,” Snyder said of his game plan against Ahlers.

Snyder said one of the main reasons he played the Super Sectional event was to, “test myself and to see if I had the ability to win and move and hit my shots accurately.”

Snyder said he wasn’t much of an athlete growing up, and the tennis he played came thanks to a hitting wall. He played No. 10 on a ladder of 10 at Beverly Hills High School, before attending UCLA and playing in one fraternity club match in college. “It was more marbles and horseshoes and some baseball,” Snyder said. “Once in junior high I was like third or fourth string on the basketball team. I finally got into a game and was so excited I went to the wrong basket.”

Snyder of course knew of the world-class UCLA players from the 1960s like Allen Fox, Roy Barth and Arthur Ashe, but it wasn’t until years later he started beating some of those legends from UCLA and USC in senior events.

“For many years they owned me but eventually I started beating them,” Snyder said. “It still amazes me that I do so well because I don’t do anything special. I do some stretching before I play and don’t eat two hours before a match. It’s just worked out well for me.”

Snyder said he got more serious about his tennis over the years not because of the competitive nature of the sport, but for the social aspect. “Many of my contacts I’ve met are through tennis,” he said.

Snyder, who is a retired real estate broker and appraiser for the City of San Diego in their assessment department, said he plans to play the National Hardcourts in September at Laguna Woods.

Snyder has no plans of slowing down, or be lured to the popular paddle game with the funny name that is being played at tennis clubs everywhere. “Not yet. One of my friends did introduce me to it and I was pretty tired after playing two games. As long as I’m able to play at this level then I will continue to do so. In January I’ll be eligible for the 90s and I’ll be able to test my mettle against some top players I know in that division.”