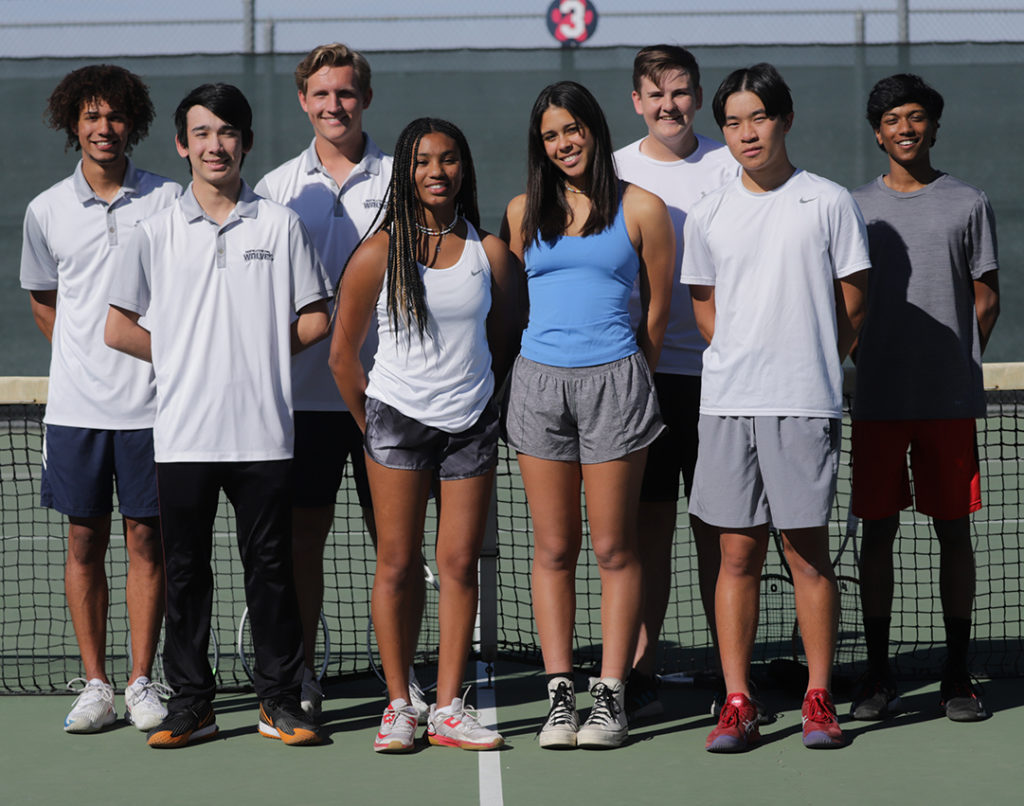 For the girls’ and boys’ tennis players at Martin Luther King Jr. High School in Riverside, there is a sense honor and privilege playing for and representing their school named after the civil rights giant and the most prolific figure in modern African-American history.

King junior Bella Connor and sophomore Brooklyn Walker are African-American players who make up the No. 1 doubles team on the ethnically diverse King Wolves girls’ team, a CIF-Southern Section Division I program that advanced to the quarterfinals during the Fall 2021 season finishing with an 18-1 record.

“I feel like there’s not too much representation of African-Americans in my sport, so it’s been great we’ve been able to do so well,” said Connor, who joined Walker on the Big VIII All-League doubles team last season. “I’m just really proud to represent my heritage in a sport that isn’t seen as that diverse.”

Walker echoed Connor’s thoughts: “Because tennis is seen as predominantly a white sport, it’s always been important for our team to represent King High in a positive way. Our team has had some success and we know we can compete with anyone.”

Walker added: “Growing up I would go to tournaments, and I would feel a little bit out of place. But being on this team I don’t think you have to feel that way.”

Coached by retired physical education teacher Debbie Gagnon, the Wolves’ girls’ team has a mix of African-American, Caucasian, Hispanic, Asian and Indian players. The team has won the league title every year except once since its inception 23 years ago. Since 2002 when the Wolves had their best year ever reaching the CIF-SS finals, King High has advanced to the quarterfinals seven times and the semifinals three times. The squad is led by sophomore Lexie Flores, who is the two-time defending Big VIII League singles champion and advanced to the CIF-SS Individual semifinals during the fall season.

Simply referred to as King High, the school was founded in 1999 and has a current enrollment of approximately 3,200 students. King Athletic Director Getty “Chip” George heaps praise on both Gagnon and longtime boys’ tennis coach Shaun Harris for what they have been able to accomplish over the years with both programs also fielding deep junior varsity teams as well as carrying 12 to 14 players on the varsity.

George said there are reminders around campus of the Nobel Peace Prize winner Dr. King and all he stood for, including parts of his speeches on the walls of the multi-purpose room. One year, King History teacher and former cross country coach Brad Peters even took King students on a field trip to Selma, Ala., researching and learning about King’s early childhood life and rise to prominence as one of the world’s most influential and well-known civil rights activists.

“Especially these past two years with all the social unrest, it is important for our students and athletes to understand the importance of what Dr. King stood for,” George said. “We really try to get that point across, especially during February and Black History Month.”

Harris fields a team with four players of mixed race, two Caucasians and the rest Korean, Vietnamese, Chinese and Indian. CIF-SS Division II semifinalist last season, the King boys’ make the move up to Division I for the upcoming season based on their past success.

“When I think about Black History Month I think about acceptance and awareness of one another,” said Harris, whose teams have finished undefeated league champions in each of his seven seasons as boys’ coach. “So as that relates to our tennis team, we have players of different races and cultures who come in and have initial reactions to team members. The teamwork and acceptance builds over time and they eventually become like brothers, which is really cool to see.”

Senior Gavin Henry made the Big VIII league singles finals last season and admitted he and his teammates often forget or don’t think about the importance the King name means when they are out on the court.

“I never really thought about it, but now that you are asking, I think it’s really a privilege to be able to be able to represent his name and what he has meant to the African-American race,” said Henry, who is African-American. “Of course, Black History Month has significance to me and during this month I often take extra time to reflect on where we are as a society. I think about Martin Luther King and the idea of looking at the past and seeing where we should be going.”

Bradley Truang is Vietnamese and a King senior going into his final year of play. “We don’t think about it much anymore because we are seniors, but it is pretty cool when they call out our school name at matches and you realize what a prominent person Dr. King was and all he stood for,” Truang said.

Both King boys’ and girls’ teams use their diverse ethnic backgrounds to their advantage and team members say it is something that has united and inspired them to achieve success on the courts.

King girls’ player Walker said the makeup of her team compared to other schools they face is oftentimes different. “Which I think is pretty cool considering how well we do,” she said. “We have all these ethnicities and that creates a belonging and allows us to bond together better.”

Connor said the ethnic diversity has led to her team being closer. “Because we are from different backgrounds, we share a special bond that other teams may not have,” she said. “We all get along so well and it’s because of our diversity.”