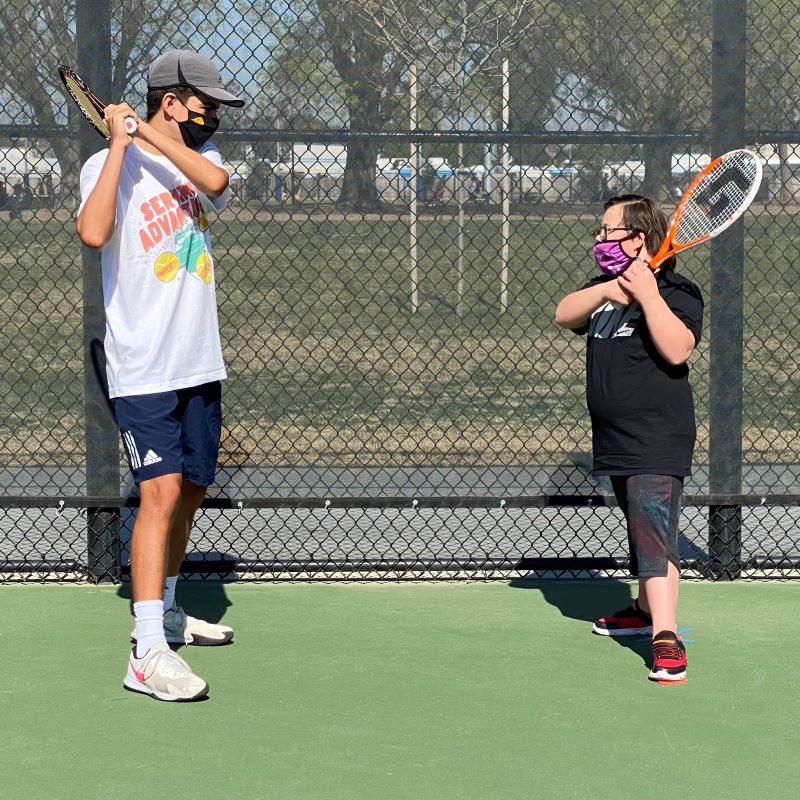 It started as a thoughtful effort to bridge the gap between two brothers, and flourished into a support system that creates tennis experiences for developmentally-challenged youngsters in Orange County. Last year, three local teenagers launched Serving Advantage, a non-profit effort to use tennis as the common denominator between Southern California students and pre-teen children with autism and similar cognitive impairments.

The program’s concept began with Jacob Eusebio, a junior at Orange Lutheran High School. Eusebio’s brother Evan was diagnosed as autistic at two-years old, and for years Jacob sought a way to connect with Evan.

“I saw all my friends playing video games, playing their own sports, and connecting with their siblings in that way,” Jacob recalls, “and I just couldn’t really find that connection with Evan. But then one day Evan found his way on to the tennis court, and that was really the day that everything changed for us, because Evan and I found our special connection there.”

Their mom, Wendi, who serves as the parental advisor for Serving Advantage, remembers Evan watching Jacob from the sideline at clinics and tennis lessons, trying to coax him onto the court. He always declined.

“We tried an adaptive tennis clinic for Evan when he was younger, but the set-up wasn’t right for him,” she says. “There were a lot of sensory issues. There wasn’t any one-on-one (mentoring). For him, that kind of set the tone for tennis. He wasn’t really that into it. After watching for a while and seeing how much Jacob liked (tennis), maybe that’s what changed his mind.”

Unlike team sports that require groups of players and large venues, tennis could provide a simpler alternative with fewer necessities, fewer distractions, and a path to progression. In creating the bond with his brother through tennis, Jacob realized that Evan’s story was not unique, and that plenty more youngsters and their families were seeking much-needed outlets that would stimulate cognitive development. That’s when he reached out to friends Natalie Rodriguez and Andrew Loughran, and together they endeavored to launch Serving Advantage.

“We kind of planned it all out, and once we saw what it could be, we started working towards that goal,” says Rodriguez, who remembers that the trio wanted to start out with reasonable aspirations while those around them urged the teens to aim higher and bigger. “But we really stuck to our goal of keeping our camp small, valuing quality over quantity, and in the long run I think that benefitted us.”

Serving Advantage started with only eight participants in 2020 (increased now to around 25 families enrolled in the camp) with a unique program that pairs every youngster with a trained peer coach, referred to as a “doubles partner,” made up primarily of area high school tennis players who donate their time at monthly clinics and the group’s summer camp. Players from sixteen different schools are among the volunteers who help create the unique experience.

In coming years, the founders will graduate to college and the amount of time they invest in Serving Advantage will change. Still, they anticipate a smooth transition to new on-court leaders who will keep the programming active and growing.

“It’s definitely something we want to continue throughout college and in the future,” Rodriguez says, noting that some of the volunteers will move up the ranks to assume new responsibilities when the founders embark on their college careers. “It’s something that we’re passionate about, and we really want to continue.”

As for Evan, he’s found an ideal outlet to enjoy the sport and, most importantly, to relax and be himself.

“It’s really nice for me to see Evan get out on to the court, to be able to interact with his peers, to be himself, and to know that he’s not being judged for his disability,” Jacob says. “He’s going to be surrounded by people who are going to accept him. As a brother, that makes me really proud.”

Learn more about Serving Advantage at their website, and find more Adaptive tennis programs at USTAsocal.com.