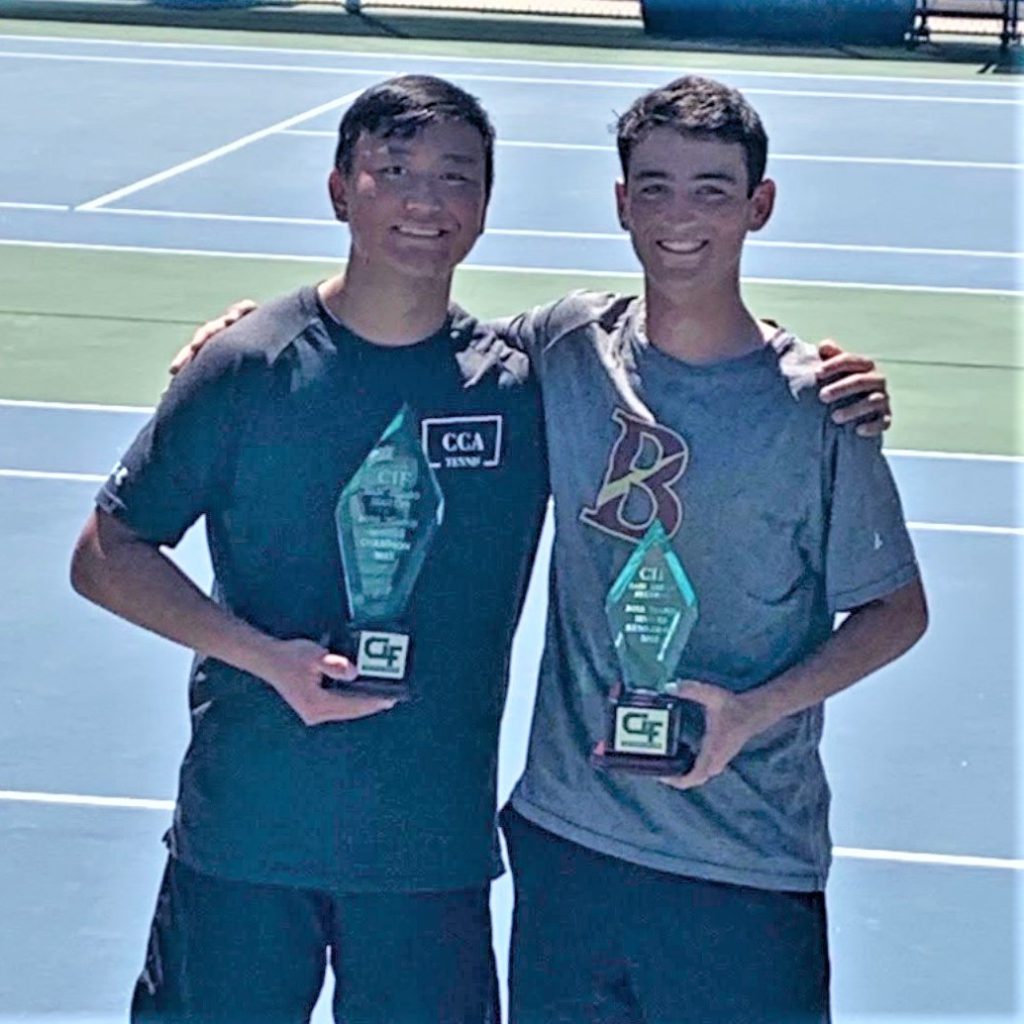 The Torrey Pines boys achieved 29 consecutive CIF team championship finals appearances, a streak that dwarfs other such streaks in the state tennis annals. They won 22 CIF Section team championships during their 29-year streak of finals appearances, twenty of them in the Section’s top division. In the last 5 boys-only tennis seasons, Torrey Pines not only won all 5 section titles, but also 3 of 5 state titles and 2 national titles.

This year a new boys’ tennis power emerged: The Bishop’s School. Bishop’s carries no championship pedigree, never having won a title in the top division of CIF competition. Nevertheless, Bishop’s assembled the nation’s #6 team by UTR.

Bishop’s, rather than Torrey Pines or CCA, was the top seed in this year’s tournament.

A clash between CCA’s Zach Pellouchoud and Bishop’s Rex Harrison – the stars of their respective teams – ended when Pellouchoud swept the last four points of a tiebreak with aggressive play to erase a 3-4 deficit. The victory from Pellouchoud gave CCA its 10th win, an insurmountable match lead on the way to a 12-6 team victory.

Even better for Pellouchoud and CCA, they followed up their Section titles with CCA’s first ever CIF State Regional Team Championship by scoring a convincing finals victory over University, dealing University its only loss of the season.

Both CCA and Bishop’s graduate only one of their top seven players this summer, which promises an immediate renewal of this budding rivalry. But CCA will need to overcome two significant losses to repeat as Section champion – Pellouchoud will take his game to Cal Poly SLO next year, while Coach Black plans to leave CCA after this term as he aspires to teach at the high school his triplets will attend in three years and is transferring to their home school.

The Bishop’s School will return its top two players in Harrison and Aden Dorros, this year’s CIF Individual Tournament runner-up. Yet future lineups cannot be assumed. Many of the Section’s top players leave CIF affiliate schools for home schooling or tennis academies, opt out of high school tennis at some point or limit themselves to high school doubles to protect their bodies or UTR singles ratings.

Given those realities, will CCA consolidate its reign over San Diego boys tennis next year? Will Bishop’s maintain and continue to build a national tennis power that will start a championship run of its own? Will Torrey Pines reemerge? Or will another team ascend, such as national #34 Del Norte?

The team to seize next year’s championship, and whether a new dynasty rises, may hinge upon which school can attract the section’s top players and inspire commitment to the team. No doubt the prospect of San Diego’s top team winning the state title adds motivation for CCA to sustain its Section supremacy and for other teams like Bishop’s to surpass them.