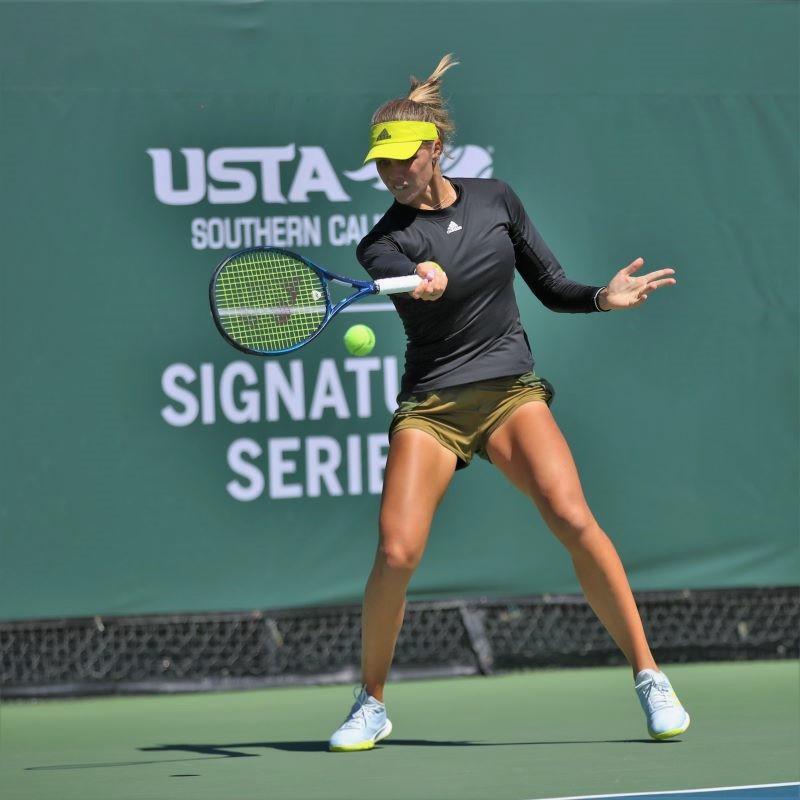 The International Open of Southern California concluded on Saturday in San Diego, as the nation’s top junior recruit and a new face in the winner’s circle both claimed IOSC titles on Saturday.

Make it a double-double for Stanford-bound Alexandra Yepifanova, who earned every bit of her In-N-Out post-victory celebration burger after her triumphant Girls’ ITF Grade 1 singles title on the final day of the International Open of Southern California at the Barnes Tennis Center.

Playing in her first J1 final, 18-year-old top-seeded Yepifanova of Lake Worth, Fla., outlasted Wisconsin’s Reese Brantmeier, 7-6 (7), 6-2, to capture the coveted title without dropping a set in five dominating wins.

The high-level back-and-forth first set was the closet Yepifanova had come all week to losing a set as she beat the IOSC doubles champion and No. 10-seeded Brantmeier for the fourth consecutive time over four career meetings.

“I thought in the first set I wasn’t really emotional, but in a positive way,” said Yepifanova, who shared she would be enjoying the West Coast In-N-Out lunch in her post-match interview before turning her attention to the ITF Grade B1 Easter Bowl, which begins on Tuesday. “I wasn’t really happy about winning games, but at the same time I wasn’t really upset about losing points.”

After falling down 1-0 in the tiebreaker, Yepifanova won four straight points, only to see Brantmeier reel off five straight to knot the score. “It ended up going my way, but my emotions were always leveled,” Yepifanova said. “I felt like I was more pumped up yesterday. But I couldn’t be in a negative mood after the first set because the level of play was so incredible.”

Brantmeier, who won the IOSC doubles title with Torrance’s Kimi Hance on Friday, was playing on the same Stadium Court where in 2019 she won the USTA Billie Jean King Girls’ 16s Nationals.

“I knew what was coming, but it wasn’t necessarily surprising,” Brantmeier said. “I still haven’t figured it out, but at least it was familiar.”

She added: “It was a great first set. I was happy with the way I played, just came up a little short. But it was a really good week for me.”

Yepifanova is looking forward to returning to Barnes TC in August for the Girls’ 18s Nationals when a US Open main-draw wild card will be on the line. “All aspects of my game were working pretty well, so I’m pretty proud of myself for that,” she said.

Ethan Quinn admitted to getting a little ahead of himself and looking over the ITF junior world rankings Friday night on the eve of playing in the singles final of his first ITF Grade 1 tournament at the International Open of Southern California taking place at the Barnes Tennis Center.

Following his 6-1, 6-4 win over No. 8-seeded Samir Banerjee, the wild-card entry Quinn said he hoped a strong IOSC and Easter Bowl this coming week would help qualify him for the season’s next junior Grand Slam at Roland Garros in Paris, France.

“I’m super excited,” said Quinn of Fresno. “Last night I was looking at the rankings because I really want to play the Grand Slams. What this tournament has done for my ranking is incredible. And now with Easter Bowl next. Right now, I’ll be high up there and maybe have a chance to get into the French Open.”

Quinn played unreal, error-less tennis in the first set to surprise Banerjee, who had beaten Quinn the only other time they played two years ago at the Easter Bowl.

“Physically I was feeling a little tired,” said Banerjee. “He just played an unreal match. Everything I seemed to do he countered it and did something better. Every time I tried hitting a shot to his backhand, he’d hit a good slice. Every time I tried moving him, he’d get there. It just seemed like everything I tried to do, he just did it better.”

Banerjee called it “very unforgiving tennis” played by Quinn. “Because if you let him back in, everything matters because he’s going to be there to just pounce,” he said. “It’s tough. He played a very good match.”