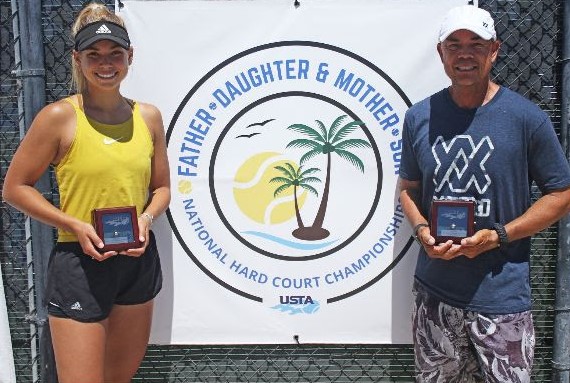 Second-seeded Bill Dunkle and Delanie Dunkle of Arroyo Grande, Calif., captured the Father-Daughter Open title with a 6-1, 7-6 (5) victory over top-seeded David Friedland and Karly Friedland of Hollywood, Fla., in one-hour and 20 minutes.

After breaking serve three times and winning the opening set, the Dunkle father-daughter duo, who lost only six games in reaching the final, took a commanding 4-1 lead in the second set and appeared to be cruising to the title.

However, the top-seeded Friedland team had other ideas as they mounted a spirited comeback to knot the score at 4-4. The set eventually went to a tiebreak where at 5-5 in the tiebreaker, the Dunkle pair won the final two points to wrap up the championship.

“The first set was pretty close. The games were really close. It could have gone either way. We were fortunate to get some breaks and pull it out,” said Bill Dunkle after being awarded a USTA gold ball for winning the national championship.

“We got an early break (in the second set), they came back strong,” he added. “It was back and forth and it was a close match from there. We got a couple of points here and there, just hung in there and believed we could pull it out.”

The 56-year-old Dunkle credited the experience of playing alongside his daughter in three previous Father-Daughter national tournaments for helping them win the title this weekend in San Diego.

“I really enjoy playing with my daughter. We just have a lot of fun. Win or lose, we’re just having a great time. It’s very special. The joy of seeing the smile on her face after we won match point, it’s priceless,” Dunkle said.

The top-seeded team of Matthew Hane of Richmond, Va., and Diane Barker of Daniel Island, S.C., won the Mother-Son Open championship as they defeated third-seeded Dina McBride and Parker McBride of Thousand Oaks, Calif., 6-2, 6-4 in one-hour and 28 minutes.

To view final results and tournament draws for each division, click here.

Cor & Co., is the official sponsor of the USTA National Father-Daughter & Mother-Son Hard Court Championships. Cor & Co., is a luxury sports jewelry designer and manufacturer whose designs are inspired by the sports we play. For more information on Cor & Co., go to: www.corand.co.