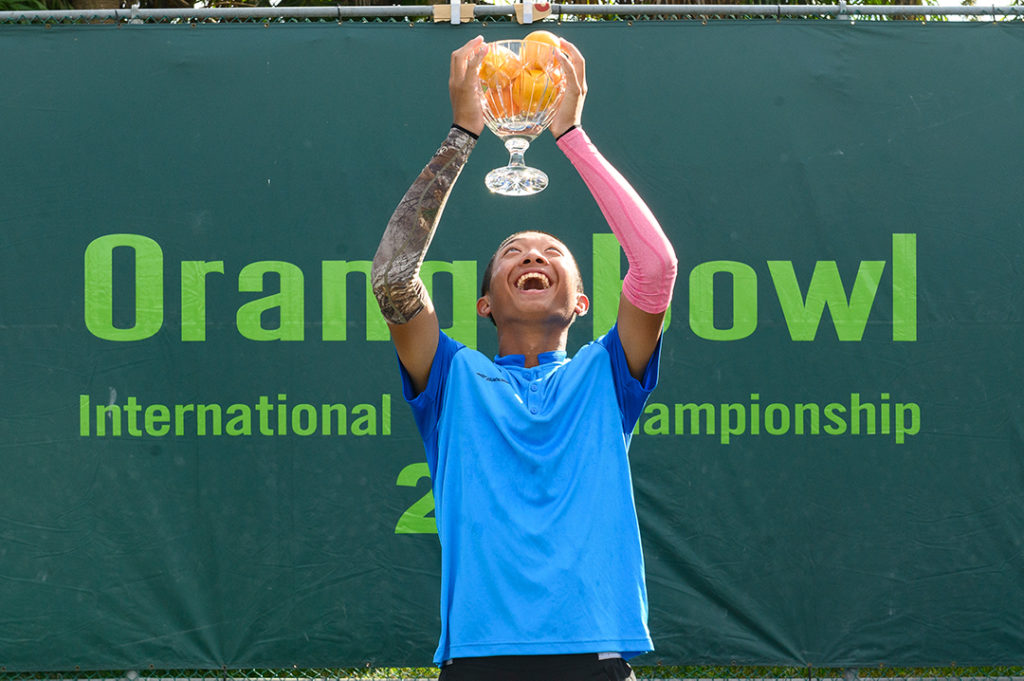 Quang Duong’s recent steady play and unexpected victory in one of the world’s most prestigious junior tennis tournaments made him realize he was done competing in the 16-and-under division.

Graduation day came in December for the 15-year-old home-schooled Duong from Manhattan Beach as he ran the table to capture the Orange Bowl with a 1-6, 6-1, 6-4 win over Alexander Frusina of Texas in the boys’ 16s singles final played at the Frank Veltri Tennis Center in Plantation, Fla.

“It feels good, nice,” said Duong when we caught up with him recently from his Orlando hotel as he prepared for this week’s USTA Winter National where he is unseeded in the Boys’ 18s. “I didn’t think about it at the time or have it as my goal, but no more 16s for me. I was focusing more on the long-term goals. I never expected to win the Orange Bowl.”

Duong said winning on clay – his “weakest” surface – showed one of the strengths in his game: his mental toughness and competitiveness. “I just went out and fought for every single point,” he said. “And that’s what I did; every match was really tough.”

Duong, who lost to Frusina in a match over the summer, overcame a red-hot opponent who couldn’t miss in the first set.

“I just didn’t believe in myself that much in the first few games,” Duong told ZooTennis.com after the match. “I wasn’t nervous, but a little tired. I told myself you’ve got to do better, raise my own level up more. In the second set, I started to hit a couple shots, get my edge up, to believe in myself more, and I came back.”

Duong went on to credit the training his father has provided him over the years on public parks in and around the South Bay.

“My Dad tells me what to do and I do it,” Duong said later. “He’s the one who focuses on the goals and what’s next. I just have to go out there and play.”

One of those goals is to someday play at a big-time Pac-12 school like Stanford or UCLA.

Duong has played sparingly in USTA SoCal events recently, playing his section tournaments just four times in 2021: USTA SoCal Sectionals at Los Cab, a national event in San Diego, and both the Easter Bowl and International Open of SoCal at Barnes Tennis Center. Instead, Duong has traveled to ITF events in Guadalajara, Bolivia and Mexico and other places around the U.S.

The family spent Christmas Day in Florida between the Orange Bowl and Winter Nationals with Duong’s mother and 11-year-old brother joining him and his father after the Orange Bowl. “It wasn’t so bad,” Duong said. “We were able to celebrate my brother’s birthday here once they arrived.”

Duong trains with good buddy Learner Tien when he’s home and finds other top players to help him focus on two of his weaknesses in practice: physical fitness and his footwork.

As for hobbies, Duong said he’s a really big swimmer and loves to play paddle tennis on the courts at Venice Beach.

“My goal in junior tennis is to play all the junior Grand Slams,” Duong said. “I want to play more ITFs like Carson and the Easter Bowl and know I’ll have to do well in those events to get into the majors.”