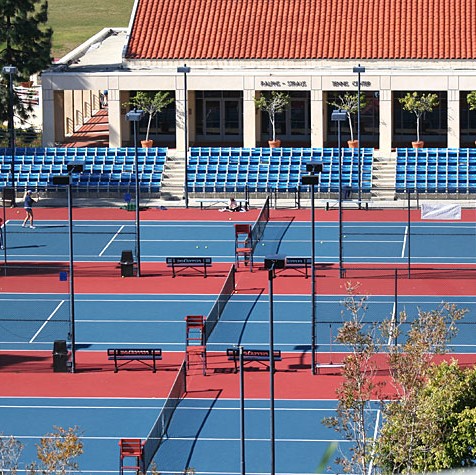 The long-awaited return of college tennis took place last week as four top men’s programs – including No. 1-ranked USC, UCLA, Loyola Marymount – all hit the courts for the first time in nearly a year. Traveling north on Pacific Coast Highway for the Pepperdine Invite, the teams hoped to jumpstart a spring season that remains in the shadow of a lengthy pandemic, one that will redefine normalcy for the hundreds of collegiate athletes who play tennis across Southern California.

“After 11 months without doing it, you realize how special it is,” said USC’s second-year men’s coach Brett Masi of finally being able to compete amid the COVID-19 pandemic and loss of the second half of the 2020 season last spring. “It was a blast being able to be out with the team this weekend and competing again together.”

The first day of competition was highlighted by USC’s sweep of singles play, and the first win of highly touted UCLA freshman Stefan Leustian’s college career. But the Bruins opted not to return for the second day of play on the advice of their medical staff “out of abundance of caution related to potential exposure to COIVD-19 unrelated to team activities.”

Masi said decisions like the one UCLA made will be commonplace this season, and there’s nothing to be done about it. “You can be playing somebody one day, and then (the next day) matches can be postponed or moved,” Masi said. “You just have to be very flexible and know that nothing is set in stone.”

This weekend it is USC’s turns to host as they welcome UNLV, UCLA and Cal in the ITA Kickoff Weekend at Marks Stadium. UCLA’s women will host Texas A&M, Washington and Kansas, and the Pepperdine women’s team will now host a regional in place of Stanford, which has decided not to host or play the event. The other teams include Denver, USC and Wisconsin.

“The good thing about our sport is it’s not high risk and if one person gets COVID, we don’t all have to quarantine like you might have to in football and basketball,” Masi said. “You just have to be ready with 1 through 10 in your lineup.”

Recently, the ITA released safe play guidelines for the upcoming dual match season along with rule modifications for the 2021 season.

Division I and II tennis programs will continue to compete, but it’s not as easy at the Division III level. Athletic programs won’t be given the go-ahead to return to play until campuses are open and classes resume in-person. The Claremont Colleges have campuses closed per the mandate from the state and L.A. County, according the CMS tennis coach Paul Settles, who reminded that CMS is expected to host the NCAAs May 24-30.

Executive Director for the Southern California Intercollegiate Athletic Conference (SCIAC) Jennifer Dubow said it’s a wait and see game on whether play will resume in this spring.

“I’d be lying if I said we were close to coming back to competition in any meaningful way,” said DuBow, who played Division III college tennis on the east coast. “We will probably have some matches at schools not in L.A. County like at Cal Lutheran (Thousand Oaks) and Redlands, which are a lot closer to having students back on campus.”

DuBow said the eight-school SCIAC conference could start back the first week of April, but that all depends on a downward trend of COVID cases. “It’s just too premature to predict what will happen,” she said. “We will just have to wait and see. It’s hard to predict what’s going to happen tomorrow, it feels like.”

While the decision has already been made by the California Community College Association (CCCAA) to not hold the state championships at The Ojai in April, there is a chance some matches will be contested by mid-April. At least for the Ventura County Community College District, the CCCAA COVID-19 contingency plan calls for Spring II sports, which includes men’s and women’s tennis, to “opt-in” or “opt-out” of the athletic season is Feb. 26. VCCCD leadership plans to hold meetings in January and early February to discuss the potential of moving forward with Spring II sports.

Ultimately, the short-term goal is to find the new sense of normalcy, a concept that has been a long time coming since college tennis closed down early in 2020. At Ventura College, men’s and women’s coach Nelson Emery said the plan is to start dual matches on April 10 if it is deemed safe to play. “And right now, that’s a big if,” Emery said.

Seems like a common theme surrounding the college tennis landscape as we head into the 2021 spring tennis season – a big if.