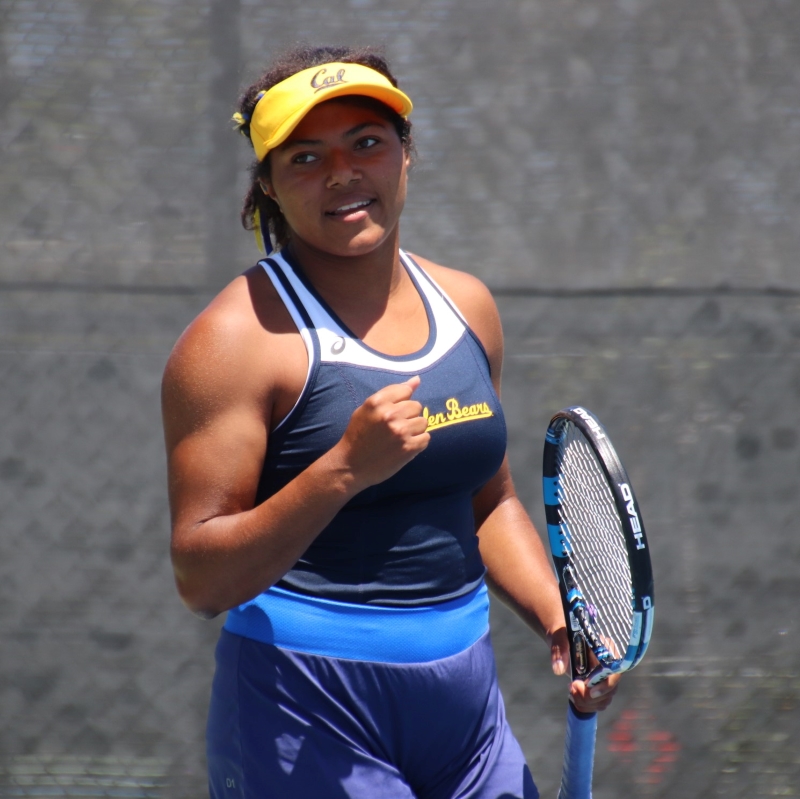 When the dust cleared last week in the battle of the Bears and Bruins at this year’s PAC-12 Championship tournament, underdog California (Berkeley) surprised powerhouse UCLA to claim the title. At the front of the pack, San Diego’s Haley Giavara was leading the charge for the Golden Bears, and in claiming her first big college title, Giavara took another step in a tennis career that remains on track for bigger and better things.

“How often is it that you get to win a PAC-12 title in your hometown? That was incredible,” said Giavara, a Class of 2019 graduate from Serra High School in San Diego’s Tierrasanta neighborhood. “That’s what we were working towards this entire time, and to see all of our progress come through, that was just incredible. We knew we had to come out strong, that they were a good team. We stressed our preparation a lot. We expected their best (in the final), and we were ready for it.”

In only her second year at Cal, the nation’s #62 ranked singles player has amassed a solid tennis resume across two bizarre, disjointed seasons. Last year, she posted a 19-7 record during her first few months in Berkeley, only to have the pandemic stall her momentum. But this season, Giavara picked up right where she left off, finishing the campaign with 10 singles wins (and 12 doubles) for the 14-6 Bears.

When the slate wipes clean next fall, Giavara’s success will parlay into a leadership role as an elder junior.

“We only have two seniors this year so next year I’ll be one of the oldest,” she said. “I’ve already started to take on responsibility on the team. It’s more of a situation where we all work together. I don’t think that I would single handedly lead the team at all. It’s a combination of all of us. They push me and I push them in drills and practice and on the court. It’s always together.”

Among the traits that make Giavara unique on the court is her ability to limit her opponents’ reaction time by waiting longer on the ball before striking. It’s a valuable skill that she has nurtured since her youth.

“I developed my pace as a kid,” she said, crediting her fast-twitch muscles as the source of her point-controlling style. “My whole game revolves around taking time away from the opponent by stepping up on the ball, being extra quick with anticipation. All of those things are designed to take time away from them so they feel like they have no time.”

For a period this season, Giavara struggled to break through against upper-echelon players like UCLA’s Abbey Forbes and Stanford’s Michaela Gordon. But two matches this spring may have defined Giavara’s growth – a win over Pepperdine’s Jessica Failla, and her dominant performance over Forbes in San Diego last week.

The next obstacle is San Jose State (15-1), the Golden Bears’ first round opponent on Friday (1pm) at Berkeley. The team will host the first two rounds of NCAA play, Friday’s winner to face either Kentucky or Syracuse. Cal sits in the top quarter of the bracket, along with #1 seed North Carolina.

“We have big goals as a team,” Giavara assured. “We’re coming off a victory but we know there’s still a lot of matches to be played. We’re going to continue preparing as champions, and we know that there’s a lot of work to be done to win an NCAA title.”

As for her future in the game, she aspires to reach the Grand Slams one day as a touring professional, especially after a recent visit to Paris in which she envisioned herself on the clay at Roland Garros. For now, Giavara will play select pro-level tournaments this summer ahead of her expected return to Cal, though admitting she will let the course of her career unfold with an open mind.