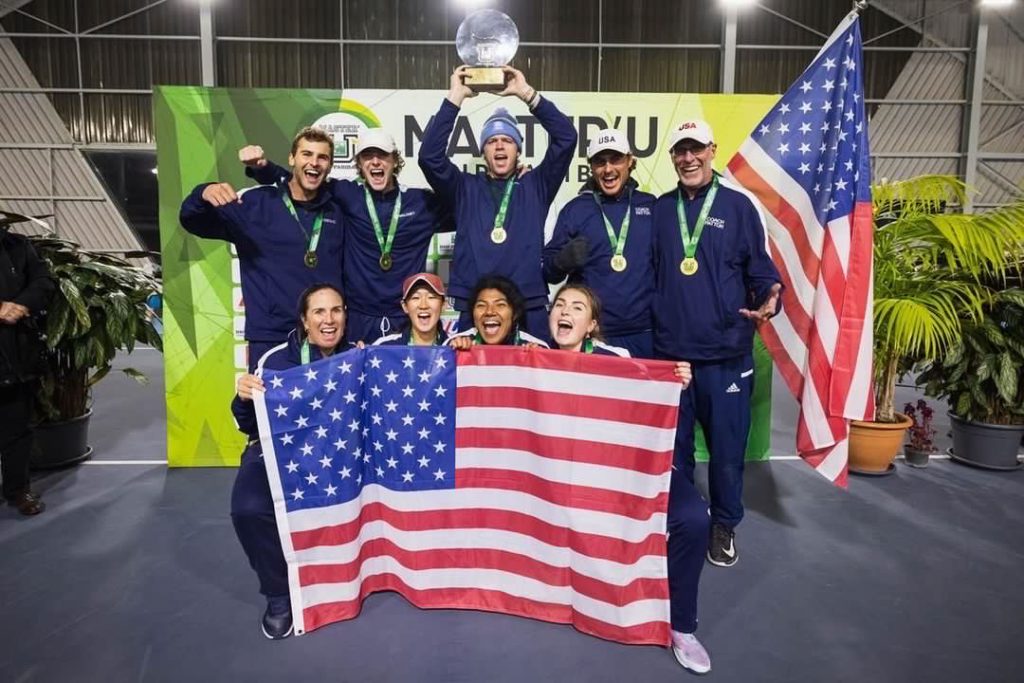 While most collegiate tennis players are preparing for a busy tennis season and navigating final exams, San Diego native Haley Giavara is fresh off a voyage halfway around the world to unfamiliar and frigid territory, braving the cold to compete in a tournament that she’d been dreaming of for years. As luck would have it, a last-minute call-up gave her the trip of a lifetime to play at the Master’U BNP Paribas tournament in France. The experience did not disappoint.

“My coach mentioned it when I first started at Cal,” recalled Giavara, now a senior at Cal. “Then COVID happened, so I didn’t know if I would ever get to do it.”

The Master’U is a celebration of college tennis where the participants selected to represent Team USA are voted on by collegiate tennis coaches. Yet while among the top collegiate players in the nation, Giavara’s participation was not guaranteed as she was returning from an injury. But a last-minute invite was all she needed to hear.

“I said yes! Because when they ask you to go to France, you don’t say no,” laughed Giavara. The Cal Bear was excited to have the chance to play against teams from around the world, with Australia, Belgium, France, Germany, Great Britain, Ireland, and Switzerland all being represented along with the USA.

Team USA and Giavara had more to handle than just their opponents, with the frigid winter in Honfleur presenting the first challenge. “France does not have heated indoor facilities, which was interesting to find out,” she explained. While she did not have much notice for her trip to France, she was carried through the frigid temps by her excitement and a snuggly pair of Uggs – and managed to place her focus squarely on her tennis. The team dealt with the cold by playing in sweatsuits for the first time, a rare sight in tennis, and one that Giavara joked that she might not want to go through again. Still, “Once you started moving around and playing tennis, the temperature really didn’t matter,” she said.

Team USA was fortunate to have additional Southern Californians joining Giavara, including Coronado’s Ryan Seggerman and Irvine’s Stefan Dostanic, as teammates on the trip. “It was basically all day on the courts,” said Giavara, adding that the team was determined to value the trip as much as they invested in the competition. “From nine to nine, it was just grinding,” she added, “but it was fun watching each other compete and cheering for each other, so I wouldn’t have traded it for a day off.”

Giavara herself contributed heavily to Team USA’s ultimate victory over Great Britain, earning a gold medal in doubles and winning a tense 17-15 tiebreaker final with her partner, Fiona Crawley. “I can look back at the photos and remember how it felt,” she recalled. “From dropping our racquets and rushing to each other, that shared feeling of accomplishment is honestly hard to put into words, but it’s something that I can feel and look back on for a while.”

After a successful tournament in France, Giavara is refocused on her last semester at Cal and hopes to enjoy her final college season as much as she enjoyed her trip to Honfleur. “I think core memories were formed in that tournament that are going to help me and my tennis for years to come,” she said. “It just confirmed how much I want to just keep playing tennis. It was fun to represent the U.S., but I’m excited to represent the Bears and just enjoy every minute of it!”