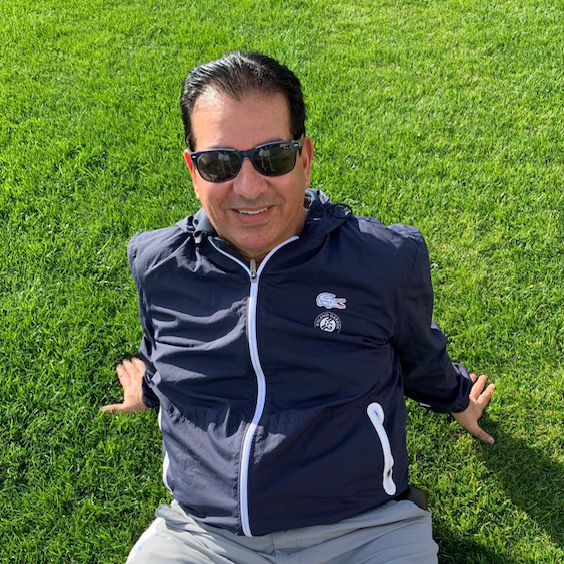 Twelve years after his doctor suggested tennis as the road to a more physical and active lifestyle, Juan Ramirez now finds it hard to even put the racquet down, and the popular SoCal Leagues team captain is leading a healthy lifestyle not just on the court, but also on the sidelines.

Ramirez’s introduction to the sport came due to some health problems twelve years ago, being 25 pounds heavier and with high cholesterol. Ramirez needed a sport that he could play for the rest of his life, and the answer was tennis. Having played baseball when he was younger, and at that time playing golf, Ramirez knew that neither of those sports fit the bill as lifelong sports that would promote active mobility like tennis.

“I signed up for a local community class for beginners,” recalled Ramirez. “And it was kind of fun. Saturday mornings, getting up and going and playing with other beginners. I wasn’t very good, but I was having fun. And I was aggressive, I just tried to poach everything!”

This aggression on the court and his enthusiasm caught some eyes, and Ramirez was asked to join a USTA Leagues team. That team, which had been around since 2006 when it formed with just three players, has always carried the moniker “The Racketeers.” Then, just three years into his tenure with the team, Ramirez was asked to serve as captain. He jumped at the opportunity.

“I really was having fun with tennis at that point,” said Ramirez. “That first year, (it was) the enthusiasm of learning new things, and on top of that I made a lot of good friends and they’re still my friends today. I think that’s probably my best memory.”

Despite the level of success that Ramirez has achieved with his teams, he is certain that the real pull of the sport is in the relationships he has built. “The friendship is actually what’s kept me in it for that long,” he explained. “I don’t think I’d be just doing it for the heck of it.”

Ramirez is also proud to represent Hispanic culture in tennis, and hopes to see more representation and outreach programs that introduce people to tennis, especially in areas with a high Hispanic population that may not already offer comparable programs.

“You need to go to them, not wait for them to come to you,” said Ramirez, who notes that only 7% of USTA players are of Hispanic heritage. “It just takes a racquet and somebody to be able to teach you. I think that’s part of the why Hispanics don’t play as much because there are no outreach programs at the local parks in those cities.”

As for the team, The Racketeers have advanced to USTA League Nationals nine times on top of 28 trips to Sectionals. This year, Ramirez and The Racketeers continue to enjoy success, having just won Adult League 7.0 Sectionals in the 40 & Over mixed competition. Ramirez will be heading to Nationals again in late October, with the Racketeers in tow.

“My first year we went to Nationals,” Ramirez recalls, “and the thing was, success breeds success. People wanted to join my team, and I’ve been doing it ever since then.

“I want to step away, but people give me players. I have a hard time saying no. It’s tough to go,” he admits.

Ask the Racketeers, and they may very well tell you that Juan Ramirez would be equally as tough to lose.