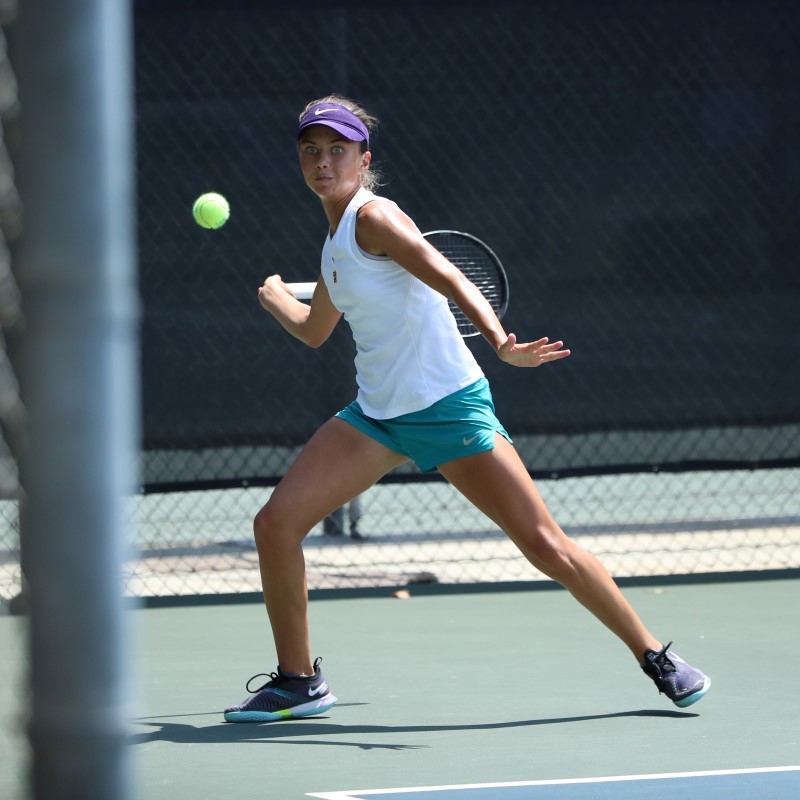 The final match of the tournament was perhaps the most anticipated throughout, and it lived up to its billing. Top seed and defending champion Alex Michelsen charged back from a set down to force a third set against #2 seed Learner Tien, but Tien capitalized on a late break to capture the Boys 18s crown on Sunday at the 119th Junior Sectional Championships in Fountain Valley.

Tien, from Irvine, was a finalist at the Easter Bowl in San Diego this spring. His stoic demeanor was unflappable, even as Michelsen posted the mid-match comeback. But when Tien found himself down a break at 3-0 in the third and deciding set, he fought back with four consecutive games and an eventual 7-6, 5-7, 6-4 victory to claim the win.

In Girls 18s, Iva Jovic of Torrance was too consistent for #13 Maya Urata, gaining control in the second set and never looking back in a 4-6, 6-4, 6-2 title win. Jovic, the #7 seed, said that winning the Easter Bowl title boosted her confidence. “Being in the final of a big tournament definitely helped me,” said Jovic, just 13 years old. Jovic won the 14s Sectional Invitational last month in Tucson, Ariz. “I think I’m doing a good job with being aggressive on my groundstrokes, and my first serve has really improved. They’re not able to track it quite as much.”

In Boys 16s, #3 William Hsieh of Midway City defended the 16s Sectional title he won last year. “There was a lot of tension out there and some nerves,” Hsieh said of his 6-2, 6-2 win over #10 Calvin Wang of Arcadia.“ The one thing I had to keep telling myself is I belong here and I believe I can do it.” Compared to last year’s crown, Hsieh “felt like this one was bigger. Just the awards ceremony and the way they introduced me. It’s incredible.”

Eliana Hanna of La Canada Flintridge outlasted #13 Monika Ekstrand, Santa Monica, 6-3, 4-6, 6-4 to win the Girls 16s trophy. “I got a little bit nervous toward the end but was able to pull it off, said the victorious #11 seed. “I had never played her but was familiar with her family because they all are all tennis players. She’s a great player and hits super hard.” A finalist at Doubles Sectionals and a rising senior at La Canada High, Hanna is excited to visit schools back east this summer and will play some Level 2 events.

Laguna Beach’s Jagger Leach upended #4 Rishvanth Krishna of Porter Ranch, 7-6 (5), 6-4, to claim the Boys 14s title. “I played well enough to win,” Leach said. “I got dirty when I had to. I feel like I did what had to be done and I’m proud of myself for that,” said Leach, who was seeded third. “It’s got to be one of my biggest wins. It’s just a really special tournament and so fun to come here.” The Leach name gets another entry in the Sectionals record books as Jon and Rick had won or made the finals on 10 occasions during their junior career. When Jon was asked about his best Sectionals memory, he said. “This is it. Right here.”

The #3 seed Haley Tran of Garden Grove upset San Diego’s Ayanna Shah with a routine 6-3, 6-2 win to earn the Girls 14s victory. “I don’t know what to say. I think it is my biggest win. I had lost in the quarterfinals in previous Sectionals. I am surprised I won,” said Tran, age 13.

In Boys 12s, Andrew Johnson of Rancho Palos Verdes upset the top seed Liam Alvarez of Long Beach, 4-6, 6-3, 6-1. The 11-year-old Johnson got stronger as the match wore on. “He’s always been a tough opponent. I didn’t feel any nerves. I was just trying to stay focused.”

Carlsbad’s Julieta Pareja defended her top billing with a strong win over # 5 Brooke Kwon of Diamond Bar, 6-4, 6-1. “It’s a special one because it’s the first time I’ve made it to the finals of Sectionals. Everyone who is the best in SoCal plays here.”