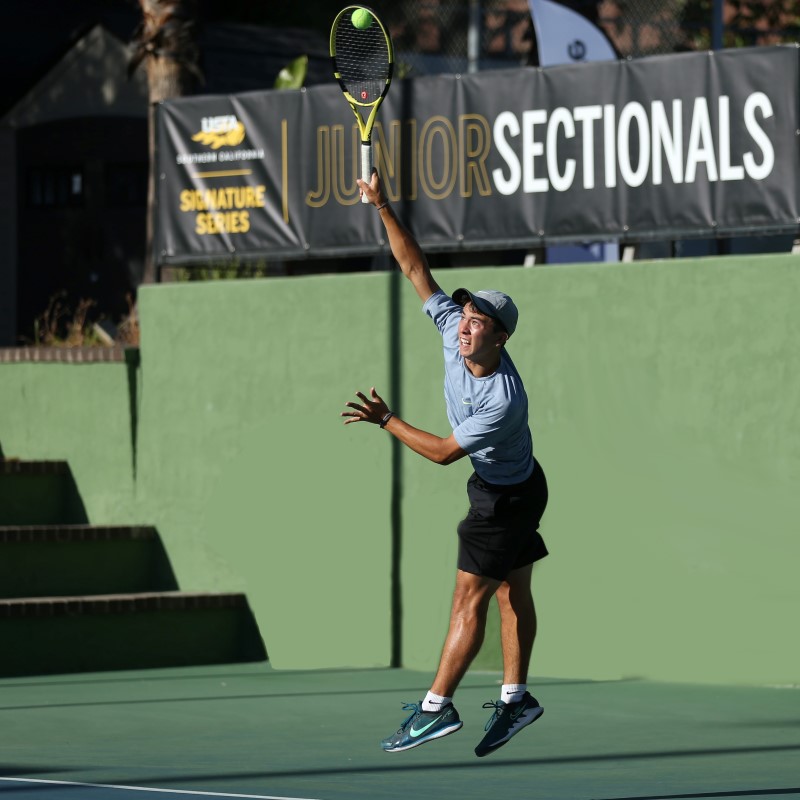 With the first rounds of play complete at the 119th USTA SoCal Junior Sectional Championships, all eyes shift to Los Cab Sports Village for Championship Weekend, beginning Friday with quarterfinal action. Some draws remain intact, while others have seen upsets, surprises, and the emergence of new faces eager to make their name in the biggest junior tennis stage in the nation.

In Boys 18s, top seed Alex Michelsen remains on target to repeat as Sectionals champion after cruising through his first two matches. In last weekend’s Round of 16, Michelson was absolutely dominant, but so was Michelsen’s next opponent, #6 Martin Mazev, who won last month’s Talbert Junior Championships in San Diego. At the other end of the draw, #2 Learner Tien was a finalist at the Easter Bowl this spring and continues his ascent toward a Sectional final. He’ll first  need to upend #5 Bryce Nakashima, who dropped only one game in his Round of 16 match-up.

Gianluca Brunkow (#3), Conrad Brown (#4), and AJ Moore (#11) are among the remaining seeds heading into Friday’s action.

Upsets aplenty in Girls 18s, but top seed Kaila Barksdale has survived a couple tough sets and one overtime thriller to advance to Friday’s Girls 18s quarters. She meets #9 Nadia Kojonroj in a rematch of their most recent contest at the Lakewood L3 in April, where Barksdale emerged in convincing fashion. Also in the mix, #10 Sophia Yang bounced the #2 seed to reach the quarters, where she’ll oppose #7 Iva Jovic on Friday.

The same holds true for Boys 16s, a division of considerable parity where a bevy of top players have fallen ahead of Championship Weekend. The top remaining seed is defending champion #3 William Hsieh, who meets #5 David Duong on Friday. Duong has been nearly lights out in 2021, reaching the 16s final at the Woody Hunt before claiming the Talbert title last month.

No trouble for Cleo Hutchinson, who continues her quest as the top seed in Girls 16s. When she wins, Hutchinson wins big, and she looks primed to face #11 Eliana Hanna in the quarters. Hanna has advanced to two east coast tournament finals in 2021, winning an L4 in Rhode Island. Emily Ing, the #2 seed, looks ready for a finals run after sweeping 12 straight games in her Round of 32 match.

While some draws have been riddled with upsets, Girls 14s is right on target. Top seed Kenzie Nguyen remains in the driver’s seat with routine wins throughout, but her quarterfinal opponent, #6 Kateryna Basovska, swept five sets in a row before losing her first game in the second set of her Round of 16 match. That’s an epic streak that will make this intriguing QF contest worth watching. At the other end of the draw, #2 Ayanna Shah has dropped only three games in three matches ahead of her quarterfinal match against Margaret Hui, the #14 seed.

The next Hance to capture the Sectionals spotlight is Keaton Hance, the top seed in Boys 14s. Hance needed an extra set to hurdle Caden Lee in the Round of 16, and next meets #8 Hovhannes Khuloyan, a finalist at the Talbert Championships. The draw features some of SoCal’s brightest future starts including #3 Jagger Leach, #4 Rishvanth Krishna, and #11 Nischal Spurling, who upset the #2 seed to advance.

Liam Alvarez, the top seed in Boys 12s, has only lost four games in three matches en route to the quarterfinals. Alvarez has three titles in 2021 and four finals overall, and he’s seen positive results against next opponent Landon Stolper, who will look to avenge two head-to-head losses last fall. The #2 seed Andrew Johnson enjoyed a walkover early in the draw, but in two matches has dropped only one game headed into Friday action against unseeded Asher Yuan.

In Girls 12s, Julieta Pareja leads the pack into Friday’s quarters. Her win over the #9 seed sets up Friday’s meeting with #6 Julia Seversen. In an intriguing QF match, unseeded Ta’leighah Saulter and Aashi Patel will face off after both eliminated seeded players to advance.

Action will continue on Saturday with the semifinals, ahead of Sunday’s finals to cap Championship Weekend at Los Caballeros Sports Village in Fountain Valley. Follow the results on our social media channels @USTASoCal.