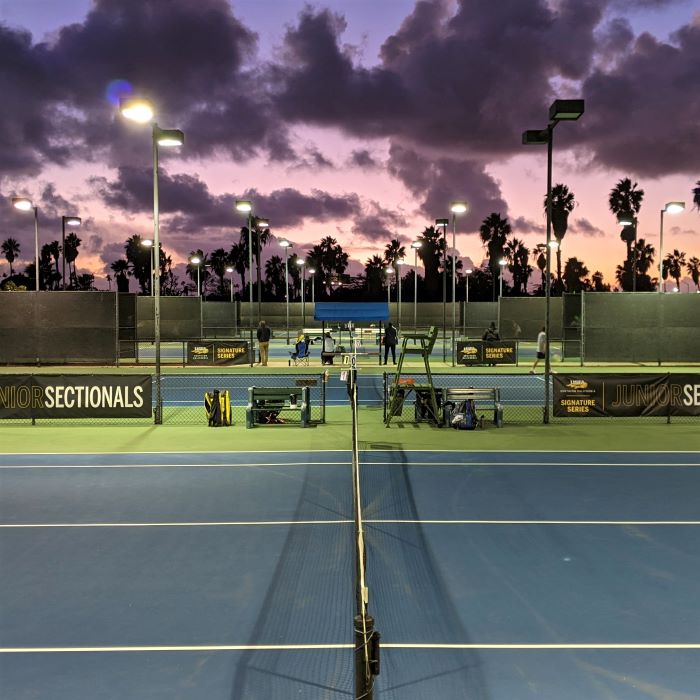 The arrival of fall weather in San Diego brought two days of intermittent showers to Barnes Tennis Center, playing havoc with the match schedule at the 118th USTA Southern California Junior Sectionals. With the championship finals set to kick off on Sunday, play was delayed and then ultimately postponed as courts remained drenched with water.

In Boys 18s, Aliso Viejo’s Alex Michelsen solved top seed Sebastian Gorzny to reach the Boys’ 18s final, avenging an overtime loss earlier this year in Long Beach. He is set to meet the powerful Jean-Baptise Badon of Corona in what should be an entertaining 18s final.

In Girls’ 18s, Newport Beach’s Rebecca Lynn earned her status as the #1 seed, conceding only eight games in four matches. With her win Saturday over Mika Ikemori, Lynn sets up a championship showdown with Isabella Chhiv of Irvine, who upended the #2 seed Maxine Murphy in the semis.

Jessica MacCallum upset top seeded Lucinda Gatsiounis in Girls’ 16s, advancing in straight sets to the final. The Laguna Beach native will face a challenge from the #2 seed Emily Deming in the eventual final. Deming outlasted Kate Fakih in the semis.

William Hsieh brings his Federer-esque backhand into the Boys’ 16s final after a semifinal triumph over #3 Yihao Huai. Hsieh will face #2 seed AJ Moore for the crown. Moore fought off cramps to eliminate Eduardo Gonzalez under the lights on Saturday in a spirited late night semifinal.

As Torrance’s Iva Jovic benefitted from a semifinal walkover to reach the final, Sophie Yang waited out a chilly rain delay to advance over Cleo Hutchinson in Girls 14s, setting up the title match.

Cassius Chinlund emerged on the Boys’ side, a straight set winner over Tyler Li. Chinlund will duke it out with Mason Bui, who reached the final with a convincing win over David Duong in the semifinals.

Maria Aytoyan of Valley Village advanced to the final in Girls 12s after a semifinal three-set win over top seed Julieta Pareja. Woodland Hills’ Thea Frodin will stand in her way, seeking a second straight Sectionals title after winning her semi opposite Ashley Liang.

In Boys 12s, top seed Rishvanth Krishna overcame a slow start in his semifinal before dealing Adrien Abarca a second set bagel and securing a spot in the Boys 12s final. He’ll oppose #3 seed Kristian Sharma, who emerged from a third set marathon to best Justin Riley Anson in their epic semifinal.

When Asher Yuan won the Long Beach L3 in March, he turned back a tough challenge from Stefanos Constantinides in the semis. The two will meet in the Boys’ 10s final  with Constantinides cruising as the top seed, and Yuan looking for the upset yet again.

In Girls’ 10s, all four top seeds reached the semifinals, with the peak players advancing. Ania Zabost has yet to drop a set as the top seed, while Fiona Tseng has done the same. They’ll go head-to-head for the title when play resumes.