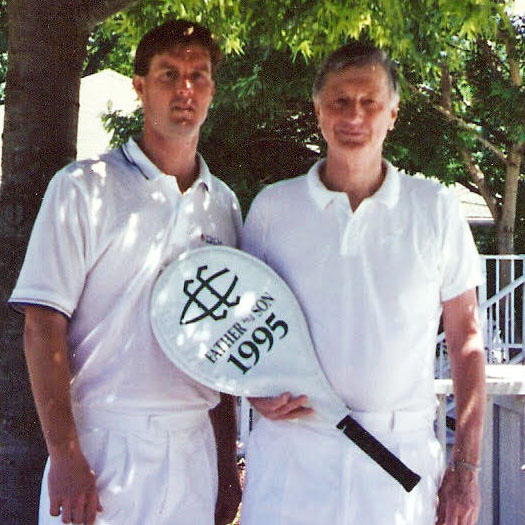 Matt Willson currently resides in Palos Verdes and is in his late fifties, while his father, Tom, is a spry 92-year-old living the good life in Florida. After winning a gold ball, six silver balls, and a bronze ball playing at father-son tournaments over 25 years, the duo has a lot to celebrate. However, despite all of their success on the court, this father-son tandem has a lifetime of memories and time spent together that mean more to them than any of their prizes or victories ever could.

The patriarch recalls picking up a racquet some eighty years ago, at age 12, when his uncle gave him an eight-dollar tennis racquet. “It all started with the free lessons at the Department of Recreation,” Tom said. Still, he had no idea that his early introduction to the sport had started him on a lifelong journey in tennis. Tom took to the sport as a junior and played all the way through high school, even winning the Michigan State Championship with his team two years in a row.

Tom went on to study at Kalamazoo College on a basketball scholarship, playing both basketball and tennis on the varsity teams. He later worked as a tennis pro to help pay his tuition during law school at the University of Michigan. Tom never stopped playing tennis and even passed on the sport to his son Matt. While Matt played a lot of sports growing up, like his dad, he naturally gravitated towards tennis and played tennis at college. Matt originally played as a walk-on at the College of Charleston, but won the NAIA doubles championship in his junior year and earned a scholarship.

It was a small tournament in North Carolina that started them on their journey to doubles success. Tom first learned of the father/son tournament in 1979, when Matt was still 15 years old. “We had a good time,” Tom remembers. “But we didn’t win.” The two enjoyed the experience so much that they continued to play at father-son tournaments for the next 25 years.

Aside from Nationals, Matt and Tom also played at numerous other father-son tournaments, including Newport Beach and San Diego. While the pair never won the national championship, they did have notable success. “The way to win the national father-and-son championship,” joked Tom, “is to have a son when you’re 20. Not when you’re 34.” Tom explained that Matt was getting discouraged after winning numerous silver balls at tournaments but never the gold ball. Finally, in 2005, the father-son duo earned that coveted USTA gold ball.

The two enjoyed traveling, and they just as much enjoyed meeting other father-son tennis duos over the years. “We started off in Charlotte,” said Matt. “Then we met more fathers and sons, and we’d probably play three out of the four national tournaments every year. I was a frustrated teenager at the time. It took a few years to mature and realize what it was all about and the relationships we’ve made. It’s very different playing with a family member. You want to do well and impress your dad, and I’m sure he tried to do the same for me.”

The two have enjoyed many years on the court, and it’s clear that the reason they continued to play with each other for so long was because of their mutual enjoyment of tennis. “The friendships that we’ve met and still have,” said Matt. “Being together as a father and son, it’s a special bond!”