Double the fun: Siblings excel on the same side of the net - USTA
College News

Double the fun: Siblings excel on the same side of the net 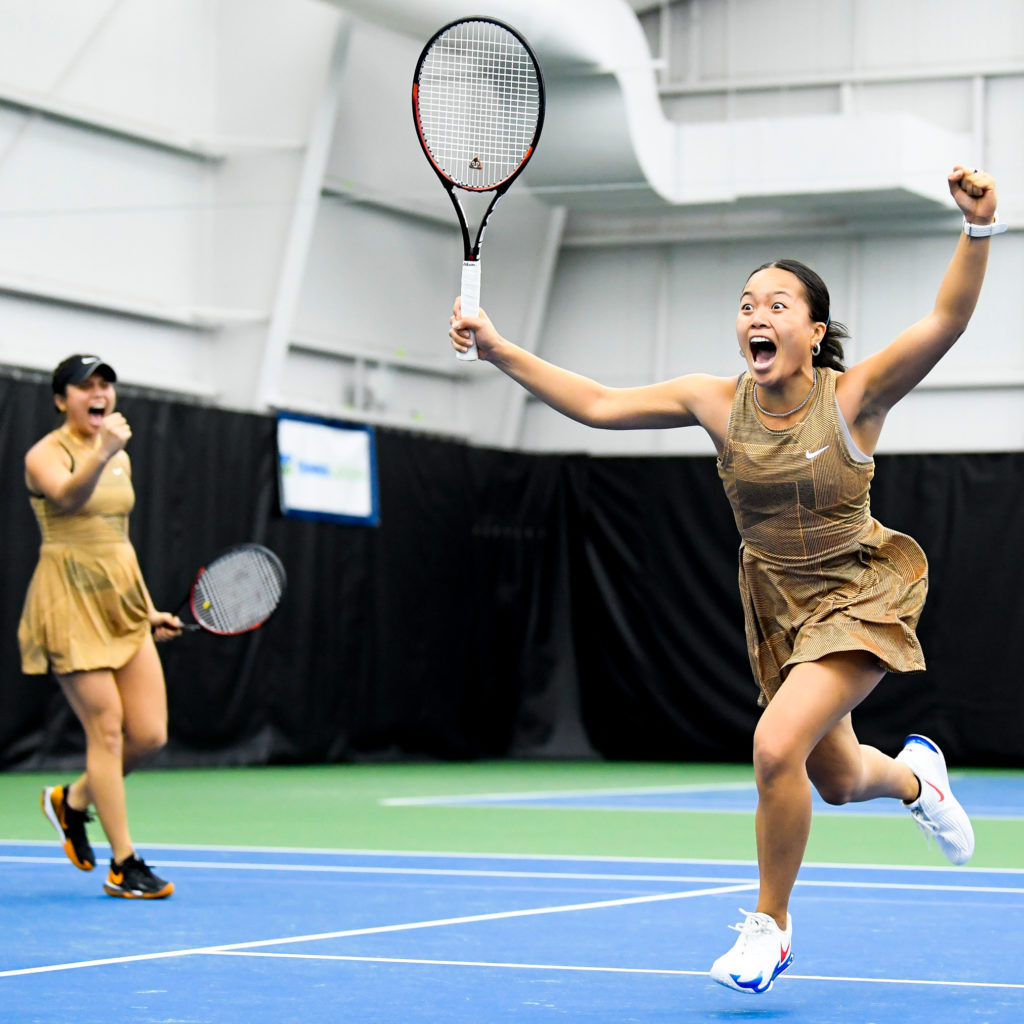 It took a leap of faith and an unlikely destination some 2,000 miles east of home for the Canete sisters to re-discover their love of tennis and the joy of playing together as a team.

A sophomore and freshman at Central Oklahoma University in Edmund, Okla., 19-year-old Mae and 18-year-old Christine – who grew up playing with each other in Southern California and national tournaments – know that amazing feeling of high-fiving a sibling after a sweet put-away volley or a down-the-line winner.

It’s the same feeling brothers Kyle and Tristan Pham felt recently as they won a memorable round at the 132nd Pacific Coast Doubles playing for the first time ever as an Independent team against some of the top college programs in the country.

From the Williams sisters to the Bryans and McEnroes, tennis has long been a popular family sport and the root of more than a few sibling rivalries. It’s also a great way to forge lasting relationships between a brother or sister.

“I really enjoy playing with my sister,” said Mae Canete. “At the end of the day, we are better together than apart. It’s been great for team camaraderie and great for our family. It’s just really been incredible.”

And that’s the only way to describe the Canete’s success since they arrived at Central OU, an NCAA Division II powerhouse currently sitting at No. 2 in the country. Last season Mae was named the ITA “Freshman of the Year” nationally. In the Fall, Christine joined the squad pairing with Mae and leading the team to the ITA Cup Division II Doubles National Championship. Last month, COU finished runners-up at the National Indoors. Mae is currently ranked No. 2 in the country in singles, Christine sits at No. 4 and the duo are No. 2 as a doubles team.

“We’ve always played together except when we were in different age divisions,” said Mae, herself a national champion by the time she was 14, including a win over current pro Coco Gauff. “Juniors doubles is so different than college doubles. We had a really good chemistry in juniors but in terms of doubles points and point construction and the technical aspect of it, we really didn’t get a taste of that until college. We’ve been really able to elevate our doubles game.”

Mae said both her and her sister experienced junior tennis burnout by the time they were seniors in high school but regained their love of tennis at – of all places – the paddle ball courts in Venice. “I decided to put down my racquet because my purpose wasn’t clear and I wanted to experience other parts of life,” Mae said. “I didn’t really understand the value that tennis had in my life. I always loved racquet sports and I was playing a lot of paddle tennis because I live in Venice Beach. The players there saw us and said you are obviously tennis players and you’re really young so you should go play in college.”

A recruiting agency called Mae, who thought she better cease the opportunity to become the first in her family to attend a U.S. college. She will admit that Stanford was the goal early on, but her and her sister couldn’t be happier at the decision and home they’ve made in Edmund.

In another part of the country, it was an assist from former UCLA assistant and current Southern Methodist men’s tennis coach Grant Chen that allowed Kyle and Tristan Pham to experience playing together for the first time.

Kyle, a junior at SMU and Tristan, a freshman at Corona del Mar High School, scored a huge win over a UNLV in their maiden match together. “They were really a much better team than us,” recalled Kyle of the 4-1, 1-4, 10-8 win as the pair saved three match points. “It was kind of weird because we had never played a match together. We were trying to treat it like a normal match. I was really happy for Tristan because he’s so young and had never played in as big a match as that one.”

Because of their five-year age division, Kyle and Tristan didn’t play a lot as juniors. “I’ve seen Kyle play and I know what he likes to do,” said Tristan, who plays on the Corona del Mar varsity team. “He knows me. I could anticipate what he was going to do. I’d love to do it again if he has the time.”

Central Oklahoma women’s tennis Coach Joe Vann said it’s not always a given that siblings can play together and have success. “You always try but sometimes it doesn’t work because of sibling rivalry,“ he said. “That doesn’t exist with Mae and Christine. Their communication is amazing. It’s like getting a doubles team that had already been together for four years. It’s just incredible to watch.

“They were born to play with each other.”