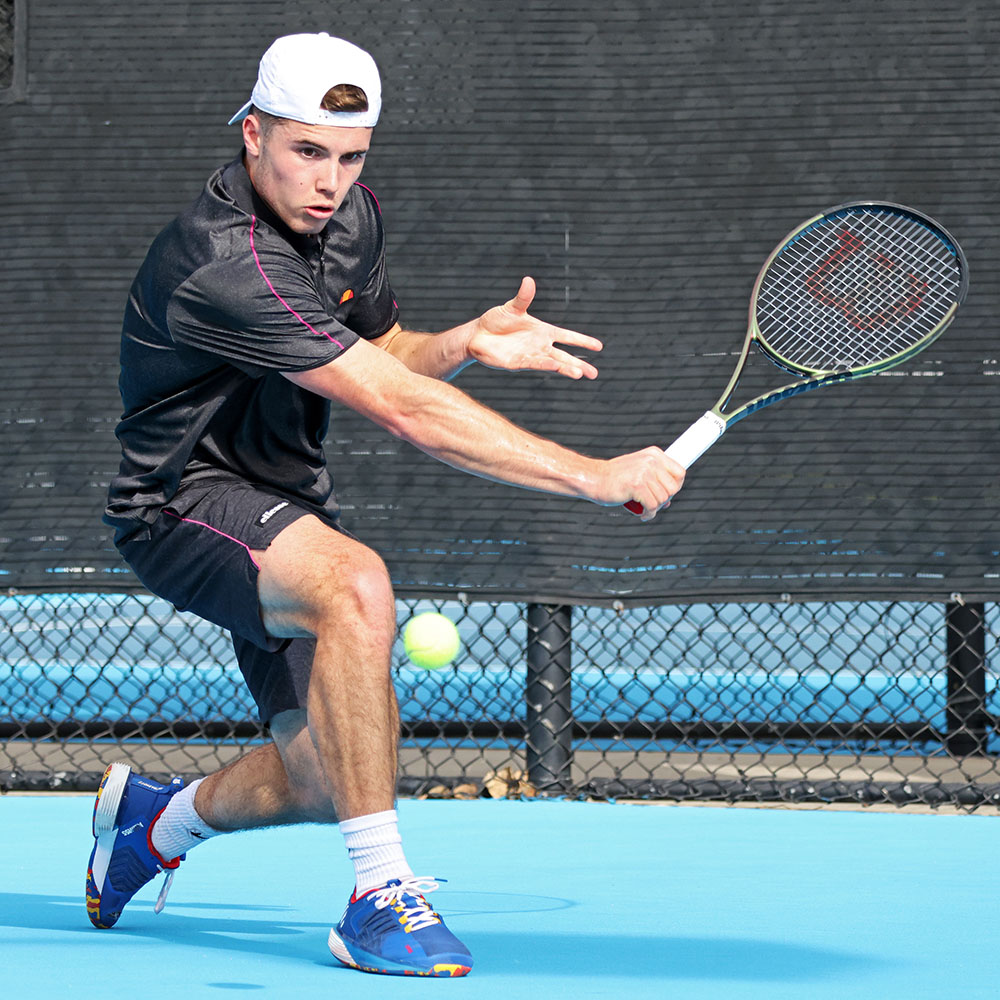 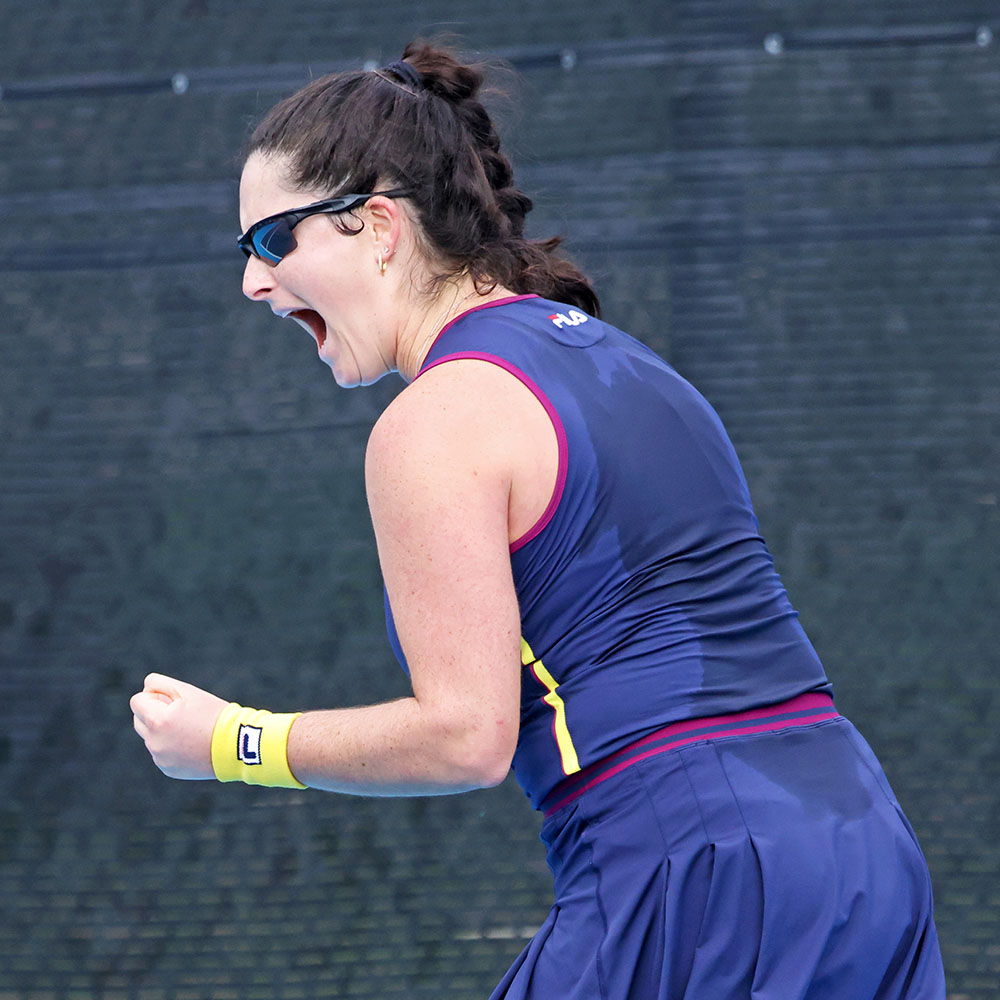 Michelsen’s bid for a second USTA Pro Circuit/ITF World Tennis Tour singles championship fell a couple games short as the fifth-seeded Fery, a native from Wimbledon of all places, rallied from three games down in the final set to pull out a 6-4, 2-6, 6-4 victory in the first of eight events on the 2023 SoCal Pro Series.

Fery, 20, claimed his third ITF $25,000 tournament crown in the past six months, and his first in the United States. Stanford University’s returning No. 1 player and ITA Division I All-American earned 25 ATP ranking points and a $3,600 prize for winning the title. Michelsen received 15 ATP ranking points and $2,160 as runner-up.

“Very happy to be back in California,” said Fery, the Stanford junior who spent his fall playing on the ITF circuit in Europe and flew from London to make this SoCal Pro Series start. He is celebrating his title by driving himself and his trophy back to Palo Alto, where he’ll be in the classroom at Stanford on Monday and on the practice court with his Cardinal teammates in the upcoming week.

“I was alone this week, without my coach, so it was a little harder. I took care of business and I’m happy that I could do it on my own. I’m glad to see my game is evolving. It’s super positive, super confidence-boosting, especially since the whole of the college year is played on hardcourt. Hopefully I’ll have a positive season with Stanford. If I play like I did this week, I have a chance (of winning the NCAA Division I individual singles championship). That’s definitely a goal of mine.”

From Michelsen’s perspective, the match ebbed and flowed with his service game performance. He was broken by Fery at 4-4 in the first and third sets, allowing Fery to close out each set on his racket.

In between, Fery felt Michelsen’s fury as the Southern California teen rolled off seven straight games – from 2-2 in the second set to being up 3-0 in the final set. Given Michelsen was up break early in the sets he lost, he took the defeat hard, knowing he had squandered a winning opportunity.

“I was up 4-2 in the first set – I should’ve won that – and I was up 3-0 in the third set,” Michelsen said. “He definitely raised his level in both of those sets. I didn’t make enough first serves. The first-serve percentage was not as high as it should be. It’s tough. It’s tough.”

Michelsen’s reaction to the match, however, demonstrates the growth of where he believes his game has elevated to. Though technically still a Junior tennis player, and still a year away from beginning his collegiate tennis career at the University of Georgia, Michelsen has found a new home for his competitive tennis. His renewed sense of belonging now lies on the USTA Pro Circuit and ITF World Tennis Tour.

Junior competitions might be in Michelsen’s rearview mirror and he acknowledges the SoCal Pro Series, organized and managed by his native USTA SoCal section, has played a role in his current tennis ascension. Michelsen can be considered an unofficial poster boy for USTA SoCal’s mission and purpose in creating the SoCal Pro Series.

When he began playing on the inaugural SoCal Pro Series last June, Michelsen estimates his ATP ranking hovered around 1,200-1,300. After reaching his third consecutive ITF final ($15,000 events in November in North Carolina and Michigan, where he win, and this week’s $25,000 event in Malibu), the newly-gained ranking points will boost Michelsen to a new career-high ATP ranking in the 500s.

Which has Michelsen’s sights set on traveling to USTA Pro Circuit $25,000 tournaments, and even Challenger events, in 2023 while keeping an open mind and schedule towards the SoCal Pro Series’ seven-tournament session in the spring and summer.

Said Michelsen: “I feel like I’m pretty much at that level (between USTA Pro Circuit $25,000 and Challenger tournament competition). My expectations are definitely a lot higher than they were six months ago, and I expect they will be higher six months from now. SoCal Pro Series has helped me. It has boosted my ranking and my confidence and my game. I’m getting a lot of matches. It’s nice that all the tournaments are close to home.”

Fery had never seen Michelsen play before this week, and the teenager made an impression on him.

Said Fery: “Alex, for a set-and-a-half, played absolutely lights out. I don’t think I could have gotten another game off him if he didn’t come down from that level. Third set, his level dropped from incredible to, well, I’ll say standard. I’m 100-percent sure we’ll be seeing him down the road in the college ranks. He already is at that level. That match today was a top-10 (national ranking-like) college match. He just needs to mature and keep on improving.”

As for Fery, he believes his recent success at the $25,000 ITF level will have him looking to become more of a regular on the Challenger circuit. Sunday’s triumph will boost Fery’s ATP ranking from No. 473 to a career-best in around the 420s.

“As a competitor and as a professional, your goal is to be ranked as high as possible,” Fery said. “I’m probably going to be looking for more Challengers from now on so it boosts my ranking and gets me into more tournaments.”

Loeb earned a $3,935 winner’s check and will boost her No. 259 WTA ranking with the addition of 50 WTA ranking points. As runner-up, Zarazua (No. 368 WTA ranking) nets 30 WTA ranking points and $2,107. Loeb broke Zarazua for a 5-4 first-set lead after the sixth-seeded Mexican put two consecutive unforced errors into the net, and there was no looking back.

“It feels great. It’s been such a long week – I think I played a total of two practice sets this week (due to the rainstorm that plagued tournament week) – and to start the year with a title, it’s great momentum to start the year and I’m really proud of myself,” Loeb said. “I thought today was more like the tennis I have been playing recently. To win this is really special, and special for my family.”