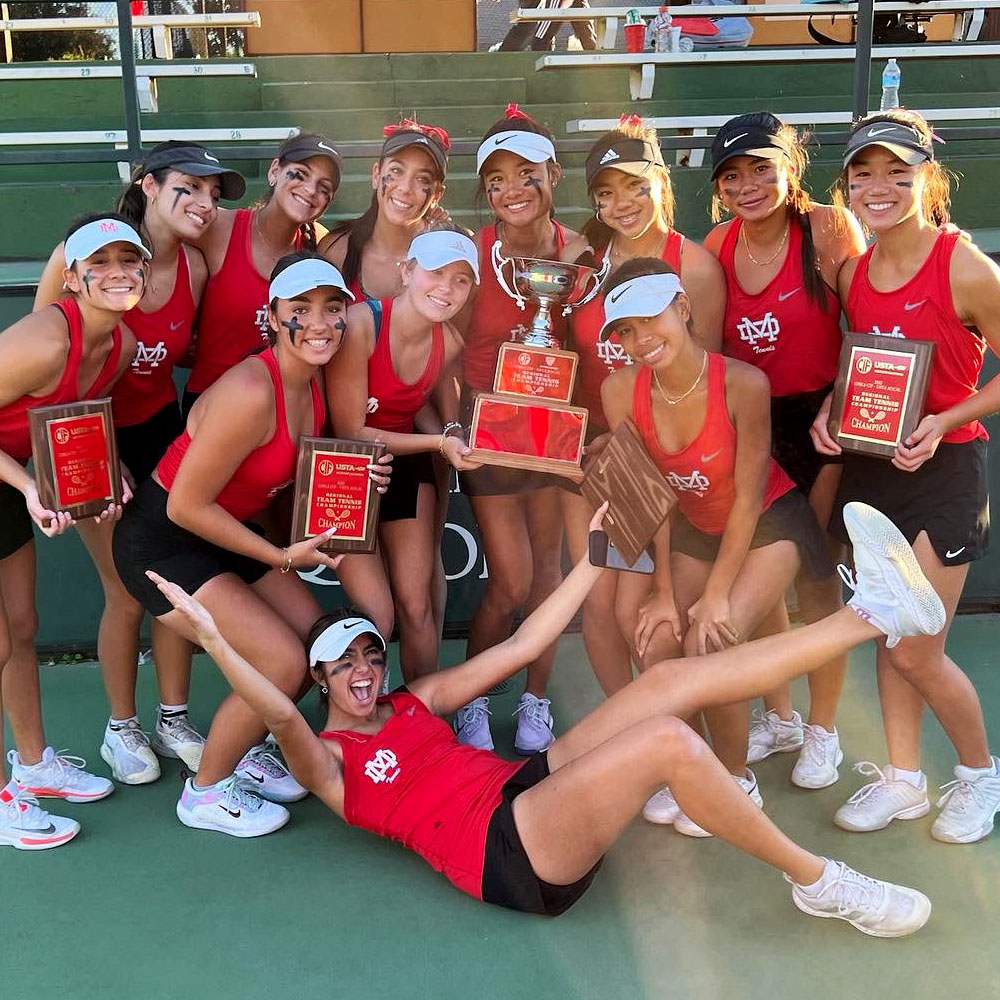 In her first year as the head coach of the program, Mater Dei Head Coach Debbie Shaffer had to not only settle into her new role but also manage the high expectations of the girls’ team and juggle a few unexpected twists throughout the season. In the end, the best of circumstances – Mater Dei High School’s girls tennis team posted a stellar season and capped it off with their very first CIF State Championship.

When Shaffer looked at the season ahead, she knew she had a team that had a lot of potential but was challenged with getting the entire team on board. “Tournament players generally want to practice with their own coaches instead of coming to high school practice,” explained Shaffer. “My goal was to make practice as high-level as possible so they would want to come to practice. I also tried to make it fun, so there was even more reason to come. It was so amazing to see all the girls willingly show up to practice!”

The first step toward their CIF title was creating a team culture that made her players excited to come to practice. As the season went on, Shaffer found that there were always issues popping up, such as injuries or absences, meaning she had to rely on all of her players to step up and play a role. “My goals never really changed,” said Shaffer. “I knew we could win a CIF title if I could get everyone to show up.” Shaffer felt a sense of relief at winning the title, knowing that she had so many talented players that, in her mind, it was a goal that they had well within their grasp.

In the championship finals, Mater Dei defeated Palos Verdes 6-1 to clinch the title and bring the gold home to Orange County. “We told everyone how good our team was and how we could win, but it doesn’t mean much if you cannot pull off the actual win,” said Shaffer. The win was the first CIF State Championship in the history of the program and only the second state win for a school in Orange County, lending even more meaning to this historic championship for the school.

A lot of qualities make up a successful team like Mater Dei, but Shaffer singled out her team’s selflessness as being key to their victories. “Any one of the girls on our team could play any number or could play singles or doubles,” she said. “Their trust in me and Coach Tracy Harris was so special. Because of this trust, they always believed in the lineup and where we had them playing.”

In the finals, a number of Mater Dei’s singles players swept their matches, including Natalie Lynch and Chloe Vu, who became the first Mater Dei doubles team to win singles titles. Lynch’s father also attended Mater Dei and is celebrated on the school’s Wall of Fame, having won a CIF hurdles title during his tenure. Natalie’s goal was to join her dad on the prestigious wall before she graduated Mater Dei, and Coach Shaffer expressed her pride in seeing Lynch accomplish this feat.

Also sweeping her singles match was junior Veronika Zarovna, a Ukrainian orphan whose dream was to play tennis in the United States. Mater Dei was able to help find Zarovna a host family and enroll her in the school, and she enjoyed a successful season at #2 singles for the team. “She brings a lot of energy and fun to our team,” said Shaffer.

After so much success in her first season, it may be easy to rest on their laurels, but Shaffer and Mater Dei hope to continue the school’s championship pedigree. “I want to continue to make the level of our teams as high as possible,” explained Shaffer. “I hope we will encourage more tournament players and other good tennis players to play high school tennis and experience what it is like to be on a team that is all in.”