On Father’s Day, the Trigueiro Tradition of Tennis 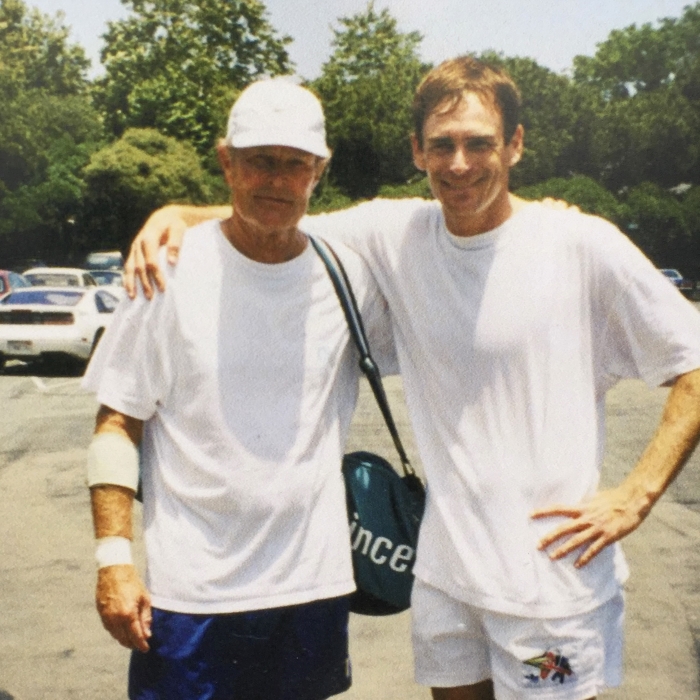 If you grew up playing or following junior and high school tennis in Southern California in the mid-1980s through the end of the century, you were aware that the road to a CIF-Southern Section tennis title always went through Santa Barbara High School.

For 32 years from 1967 to 1998, Jack Trigueiro patrolled the sidelines for the Dons, and was responsible for creating a cultural of winning that, for a time, was unparalleled anywhere in the United States and may never be seen again. Trigueiro’s teams won ten CIF titles, 30 straight Channel League titles, and at one point won 179 consecutive league matches in a row.

Jack’s youngest son Tim Trigueiro was the beneficiary of the disciplined and often-stern coach, who first made his name in Southern California as the Santa Barbara High boys’ basketball coach where he coached three future NBA players, including former Lakers Jamal Wilkes and Don Ford.

Tim, now a 53-year-old Carpinteria resident, won the US Open Junior Boys’ singles title in 1985 and played at UCLA and Southern Methodist before traveling the world on the ATP circuit. He now lives just a few miles south of his parents’ longtime home in Montecito. We caught up with Trigueiro on this Father’s Day weekend and checked in on Jack, who is recovering from a broken hip at 86 years old.

“My dad kind of came from a tough place,” Tim said of Jack, who showed up in Santa Barbara in 1964 from Bakersfield, where he was known as a bare-knuckles fighter who would brawl in the open fields. “It’s known as UFC now,” Tim said. “Back then there were no weapons and you just fought and it was kind of a sport, a skill.”

Tim said it was common during that time for a successful football or basketball coach to be asked to coach another minor sport during the off-season. “So they gave him tennis, and it was a sport he knew nothing about.”

Jack knew his son would not achieve the success he did during his junior career if he didn’t hand him over to coaches like Larry Mousouris, then of the Santa Barbara Tennis Club, and a few years later sending him to work with the legendary Pancho Segura.

“My dad was able to take in a lot from Pancho,” Tim said. ”I spent ten years with him, and we had a great relationship. He loved me and I loved him. He would take me around La Costa Resort in Carlsbad and it was amazing. They loved Pancho and he was a mainstay there. I met the most incredible people there. He would introduce me as the future junior world champion, and I was 11. I got to play with Jimmy Connors, Bobby Riggs, (Ken) Rosewall. He would say, ‘I have $500 on the kid, Bobby (Riggs),’ and he made you play nervous.”

Trigueiro said Pancho took him to his first US Open in 1984, but never watched any of his matches. “I won my first three matches and he wasn’t there,” Tim recalled, chuckling. “Maybe he was there and didn’t want me to know it. I was 17.”

In the Round of 16, Trigueiro led the prodigy Boris Becker of Germany late in the match before falling. Eight months later Becker would win Wimbledon at just 17 years old. The next year, Trigueiro won the junior boys Open, and credits winning the back draw at the Kalamazoo 18s Nationals for giving him the extra matches and confidence to lift him to the title.

Trigueiro, who in 2019 was inducted into the Santa Barbara Sports Hall of Fame 20 years after his father, knows people think of his dad as a win-at-all-costs, tough coach but that it was “all a bluff.”

“I had a very balanced parental situation,” Tim recalls. “I had a mother who didn’t care one bit about tennis. She was super smart and strong and loving and my dad was kind of like a mad scientist. Everything that he had learned in basketball he then in turn used it in tennis. For me, I don’t think of it as a difficult situation to come from. I know a lot of people think that, but it was a bluff because my father was very easy on me.”

Trigueiro has dabbled in coaching, replacing Jack as the boys’ coach at Santa Barbara High in 1998 for several years. He served as a volunteer assistant for the women’s team at Loyola Marymount for two seasons before moving up the coast and still works with young juniors in the Santa Barbara area.

“I wouldn’t change anything about my tennis career,” Tim said. “I’ve had three major influences on my tennis and my life. Larry taught me to play tennis, and then Pancho was just another coach I had who was just an incredible influence on me. Of course my dad was 100 percent involved until I was 19 and I went away to college. So I had three coaches, and look at those coaches: Larry, Pancho, and my dad. I’m pretty lucky.”