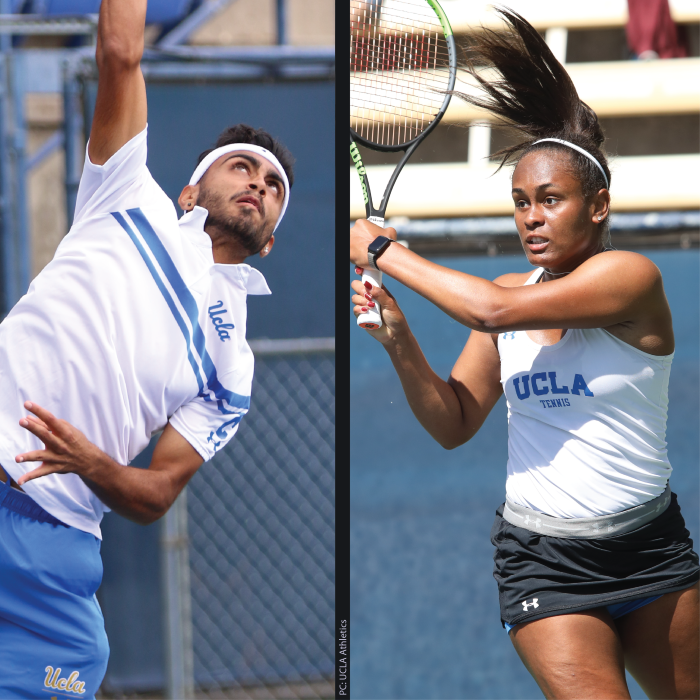 It’s been a long twelve months for 19-year-old UCLA Bruins stars Abbey Forbes and Govind Nanda, who one year ago found themselves in separate junior doubles finals at storied Wimbledon, playing on the final weekend at the All-England Club – a place they often return to in their mind’s eye, a special moment one year ago when they were living every tennis players’ dream.

Forbes and partner Alexa Noel would go on to win the girls’ title in Forbes’ first trip to Europe and only her second tournament ever playing on grass courts, while Nanda and Liam Draxl would fall in the boys’ doubles final in Nanda’s second time playing in the tournament.

“We talked about it a couple of time when we got back to campus,” said Nanda recently. “It was pretty awesome having two Bruins in the final in the same year.”

Forbes, a sophomore from Raleigh, N.C., said you didn’t even need to be entered into the tournament to be wowed by the entire experience of Wimbledon. “It’s just the Stadium Court and the whole fan experience and seeing the few Americans in England watching,” said Forbes. “The All-England Club comes with so much history and the purple, green and white flowers everywhere. It’s really quite an experience.”

Forbes and Nanda were invited to attend the Champion’s Ball and got up close with men’s singles champion Novak Djokovic and women’s singles winner Simona Halep. “It was amazing,” Forbes recalled. “They dressed us up, did our hair and makeup. They took us into downtown London and we were treated like royalty. It was a night I’ll never forget. It was probably the best night of my life.”

Nanda, the third-year Bruin from Cerritos, said taking part in the Champion’s Ball really gave a player “a taste of what winning Wimbledon was like” and that it was the “highlight of my tennis career.”

The week before Wimbledon Forbes played for the first time on grass in Roehampton. “My coach Robbie Poole used to be Serena’s hitting partner so he knew exactly what to expect and he would put us through drills that really helped us,” Forbes said.

Forbes went home to North Carolina in March after playing in just two Pac-12 dual matches, and has stayed busy during the Covid-19 pandemic by working out a lot and doing activities outdoors. “Our courts have been open and things are pretty spread out out here,” she said.

A political science major with a minor emphasis in disability studies, Forbes plans to return back to Westwood on Sept. 18 if students are allowed back on campus. She has completed a Statistics course this summer and wants to continue working toward possibly attending law school someday.

When asked if he likes school, Nanda responded with another question: “Does anyone really like school?” Rephrased, he answered that he does well in his business economics major courses.

Originally from Redlands, Nanda said at the start of the pandemic shutdown he felt unmotivated. “But I’ve been being more professional the last couple of weeks,” he added.

Nanda was in the middle of his second season with the Bruins having joined the 2019 team at the start of the dual match season and playing at No. 3 singles for UCLA at The Ojai during the Pac-12 Conference Championships.

“We were all getting pretty amped up and were ready to face USC when they shut us down,” said Nanda, who has won two $25K ITF Futures events and lost in the Boys’ 18s Nationals singles finals at Kalamazoo earning a spot in US Open qualifying. “It was pretty devastating, actually.”

His Wimbledon experience was his second one, but so much better reaching the final with University of Kentucky’s Draxl. “It helped having a little bit of that experience,” said Nanda, who teamed with Draxl to make the semifinals in doubles a few months later at the US Open. “It’s not like we were expecting to lose, but reaching the final just seemed so far out of reach. We had some tough matches. I think the grass suited our game styles.”

Forbes is well aware that each day she shows up to practice in Westwood, she is closely connected to greatness as her coach Stella Sampras-Webster’s brother Pete won seven Wimbledon singles titles and is considered one of the game’s greatest grass-court players.

“I have only spoken to Pete once and it was on a Zoom call where he was giving our team advice,” Forbes said. “I really wanted to ask if he thought things had changed there a lot since he won it. Have things gotten better? I would love to have that conversation with him someday.”