Inspired by the all-time winningest doubles team of all time, the Blando twins will no doubt be thinking of their tennis heroes Mike and Bob Bryan when they step onto the court to play their final junior tournament this weekend at the 117th annual Jim Hillman Southern California Tennis Association Junior Sectional Doubles Championships.

Seventeen-year-old Mike and Jay Blando of Rancho Bernardo are one of several sets of twins and siblings competing in the tournament that is taking place this weekend at various sites and headquartered at Los Caballeros Racquet Club in Fountain Valley.

To check draws and scores, go to the tournament page HERE.

A prestigious doubles Sectional title isn’t the only thing on the line this weekend as points for the Bryan Brothers points standings will also be counted. At the end of 2019, the top boys’ and girls’ players in the 10s, 12s, 14s, 16s and 18s will be declared the winners of the Bryan Bros. Doubles Race and be awarded a trip to the BNP Paribas One in March at Indian Wells.

For a look at the currents points standings, go HERE.

The Girls’ 18s division will feature twins Samara and Samantha Guillory from Playa del Rey. Last year as sophomores, the pair led Bishop Montgomery High School to a CIF-Southern Section girls’ tennis championship. Also in the Girls’ 18s are the sibling teams of Milana and Bianca Molnar of Ladera Ranch and the No. 2 seeds Emily and Carolyna Fowler of San Diego.

In the Boys’ 16s there are two sets of twins entered: Weil Academy (Ojai) juniors Garrett and Angus Althausen, as well as Markus Ekstrand and Alexander Ekstrand of Santa Monica.

In the Girls’ 12s twins Addison and Karolina McKinney of Camarillo will play while in the Boys’ 12s, Irvine twins Champion and Winner Okey may end up facing the brother pairings of Oliver and Elliot Lifton of Los Angeles or Tarzana’s Gray and Chase Kelley, who come in as the No. 2 seeds. 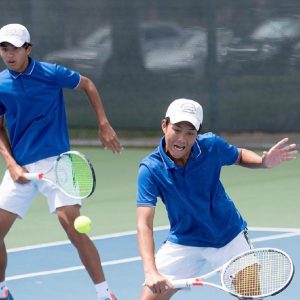 The Blando twins are seeded third at Doubles Sectionals.

The Blando family has always been admirers of the Bryans. The Blando twins’ father Ernie Blando reached out to the Bryan twins’ father Wayne about 12 years ago asking for advice in bringing up his competitive boys Mike and Jay.

“I wrote Wayne Bryan a letter and Kathy Bryan sent me the book Wayne wrote called ‘Raising Your Child To Be A Champion,’ ” Ernie said. “She wrote, ‘Have fun with it.’ So I read the book to the boys. It’s kind of parenting 101 but put into tennis terms.”

Shortly after, the Blandos attended a K-Swiss Clinic at Cal-State Northridge where they got to meet the Bryan Bros. Wayne later invited them to take part in a clinic at the La Jolla Beach and Tennis Club and the families have remained good friends.

Ernie coaches USTA Junior Team Tennis out of the Rancho Penasquitos Tennis Center and is the assistant coach for the Rancho Bernardo High School team. Last year, the Blandos led Rancho Bernardo to a CIF team title and Mike and Jay captured the CIF San Diego Section Doubles Individuals title. The Blando twins are taking a “gap” year but are close to signing to play their college tennis for UC-Riverside. 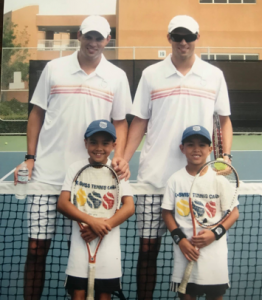 “The goal is to stay together and play college tennis and then some Challengers and see how far we can go,” said Jay, coached by Alex Golding, a former player at the University of the Pacific.

Mike and Jay both have learned a lot watching the Bryan Bros. over the years. “We live together so we can come up with strategies on the court,” Mike said. “We see how they interact with each on the court and the strategies they use. In their younger age they got mad a lot and that’s how we were back in the day. But as we got older we started to learn how to be better with our emotions.

Mike and Jay, who are coached by former University of the Pacific player Alex Golding, both have learned a lot watching the Bryan Bros. over the years. “We live together so we can come up with strategies on the court,” Mike said. “We see how they interact with each on the court and the strategies they use. In their younger days they got mad a lot and that’s how we were back in the day. But as we got older we started to learn how to be better with our emotions.

“It’s hard to play a match when you’re mad at each other. That’s the thing that has stuck the most and the best advice they gave.”

Added Jay: “Just seeing how well they work with each other has helped us. Me and my brother try to work hard to have the same demeanor as them. I feel like we’ve started to do that better. We are learning how to work together and support each other at critical stages of a match.”