The grind of the professional tennis tour greeted both Raymond Sarmiento and Dennis Novikov back into the fold this week at the decade’s first pro tennis event, the $25,000 Oracle Pro Series Futures tournament taking place on the campus of USC.

The year 2019 is one that both former USC star Sarmiento, now 27 years old, and one-time UCLA Bruin Novikov, 26, would just as soon forget as both sat idle and away from the game rehabbing serious injuries.

Novikov, who played for the Bruins in 2012 and 2013 before turning pro at age 19, lost his second-round singles match and in the doubles quarterfinals Thursday. In singles he fell to No. 2 seed Geoffrey Blancaneaux of France, 6-3, 7-5.

“It’s just really good to be back after being out a year and a half,” said Sarmiento, who suffered a torn labrum and had surgery for bone spurs in the fall of 2018. “Just to be here and playing at home, it’s just really nice to start here.” 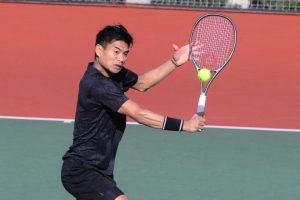 Sarmiento will have his hands full Friday in the quarterfinals at 10 a.m. as he faces local wild card Emilio Nava of Woodland Hills.

Sarmiento said literally turning the page on the calendar welcoming 2020 has helped him mentally get prepared to start the new season. “It definitely does. Especially after an off-season you know you can start fresh. You build on stuff you’ve worked on in the off-season.”

After three weeks taking a mental break with no tennis, Sarmiento worked out with the Trojans in December and with former USC star Cecil Mamiit in Burbank.

Novikov, a former USTA Boys’ national champion in both singles and doubles, entered UCLA with a main-draw US Open win under his belt. He turned pro after two seasons in Westwood with an ATP World Tour singles ranking of No. 459.

“It will take a little bit of time, but it’s good to be back,” said Novikov, who suffered a torn flexor tendon in 2019. “Last year is last year and now you have a new year and you try and make the best of it.”

Novikov, who in 2016 reached a career-high No. 119 in the world, said his immediate goals are to get back to playing the qualies at each of the Grand Slams. “I know what it takes to get back,” he added.

Sarmiento said he’s more appreciative now on the court and that it’s all about the journey. “I’ll do it as long as I can,” he said. “It’s definitely a different perspective now after missing a year and a half. Now it’s like a new life.”

Both Sarmiento and Novikov will play the Rancho Santa Fe Oracle Pro Series event next week, then Newport Beach and Dallas Challengers.

“It’s cool and nice to be back here,” Sarmiento said of the comforts of Marks Stadium and the familiar USC campus surroundings. “It’s like home. It is home.”

TOURNAMENT NOTE: A free Kid’s Day will take place on Saturday at the USC courts beginning at 10 a.m. Lunch will be provided. To RSVP, email Evan Smith at ESmith@scta.usta.