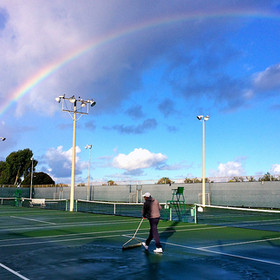 In its recovery from the lengthy pandemic layoff, tennis has seen significant and sustainable growth, especially here in Southern California. Alongside tennis, other racquet sports such as padel and pickleball have also experienced marginal growth in participation. The emergence of these sports has mostly been met with welcoming and a feeling of co-habitation as pickleball players frequently share the same or adjacent court space with tennis. However, the San Diego District Tennis Association (SDDTA) has recently been fighting a battle against certain organizations in pickleball that are demanding ownership of courts that have been home to thousands of tennis players for decades.

Randie Lettington of the SDDTA has been part of the team in San Diego that has been confronted by pickleball organizations looking to take ownership of several tennis courts. She explained the situation, “The issue is that we’re doing this more out of defense than anything else. Our tennis community has always been very strong in San Diego, we’re experiencing better than national growth at our local level. The issue is that this private entity wants a quick and easy solution to the fact that they want a large centralized pickleball facility for them to make profit on.”

Lettington echoes the sentiments of the San Diego tennis community as a whole, making clear that pickleball as a sport itself is not the problem, but an incorrect approach by individual actors. The courts in question – Peninsula Tennis Club and Barnes Tennis Center – both welcome a large contingent of tennis players and organizations from across Southern California. To requisite these courts for pickleball use, the Parks and Recreation department of San Diego would have to issue them special use permits. A number of factors currently prevent pickleball from using these permits, one which centers around the pickleball organization as a for-profit entity. Such a designation is not in line with the requirements of the special use permit, or the city of San Diego.

Despite numerous rejections, community members and the SDDTA continue to butt heads with those who look to drive a rift between pickleball and tennis players, disregarding any common ground between patrons of both sports. The tennis community and organizations such as SDDTA have not only been working with spaces such as Barnes and Peninsula for years, but also bore the responsibility for constructing the courts and creating public tennis spaces. The current pickelball developers instead seek to bypass this process, ignoring the community aspect of these venues while remaining steadfast in their unwillingness to adopt a not-for-profit model.

John Broderick, President of the SDDTA is an avid racquet sport enthusiast and is focused on ensuring that racquet sport players of all kind in San Diego have a stable and inviting community. “I’m a pickleball player, a padel player, I’m a beach tennis player and a tennis player,” he said. “I play competitively in all of those sports. I want to make sure that we have we’re not losing courts, particularly courts at a venue like Peninsula.”

The tennis community, especially in Southern California, has always paid for its own courts and venues through donations, memberships, and grants, with most of the work being done through not-for-profit organizations. The prevailing sentiment in the Southern California tennis community remains that facilities such as Barnes and Peninsula should be for the good of the public, as opposed to profit-making entities, regardless of the sport being played on their courts.

Broderick and the SDDTA are currently working not only to facilitate the betterment of the tennis community but are also working to create a space for other racquet sports in San Diego. “We’re going to look at ways to offer other options that can work with them directly,” he adds, “and perhaps help facilitate pickleball, separately from tennis and grow a sports facility with regards to racquet sports at that location at Peninsula.”

A city meeting on this issue is scheduled for Tuesday, May 3 at Santa Clara Rec Center Mission Bay (1008 Santa Clara Place). The SDDTA recommends arriving by 4:30 pm for a 6pm meeting. Additional parking can be found at 1220 El Carmel Point San Diego 92109 which is about a 5-10 minute walk from there.

“At the last meeting the tennis players did an amazing job by bringing their tennis racquets and signs to show support for preserving our tennis courts and save Peninsula Tennis Club from being destroyed,” Broderick penned recently in a pleas to local tennis players. “We strongly encourage parents of junior tennis players to bring their kids out this time as this outcome affects junior and adult programs throughout San Diego County. Once again it’s likely the news stations will be on hand as the last time this story was one of the most viewed that entire week. Please bring your tennis racquets and signs supporting tennis but be respectful.”