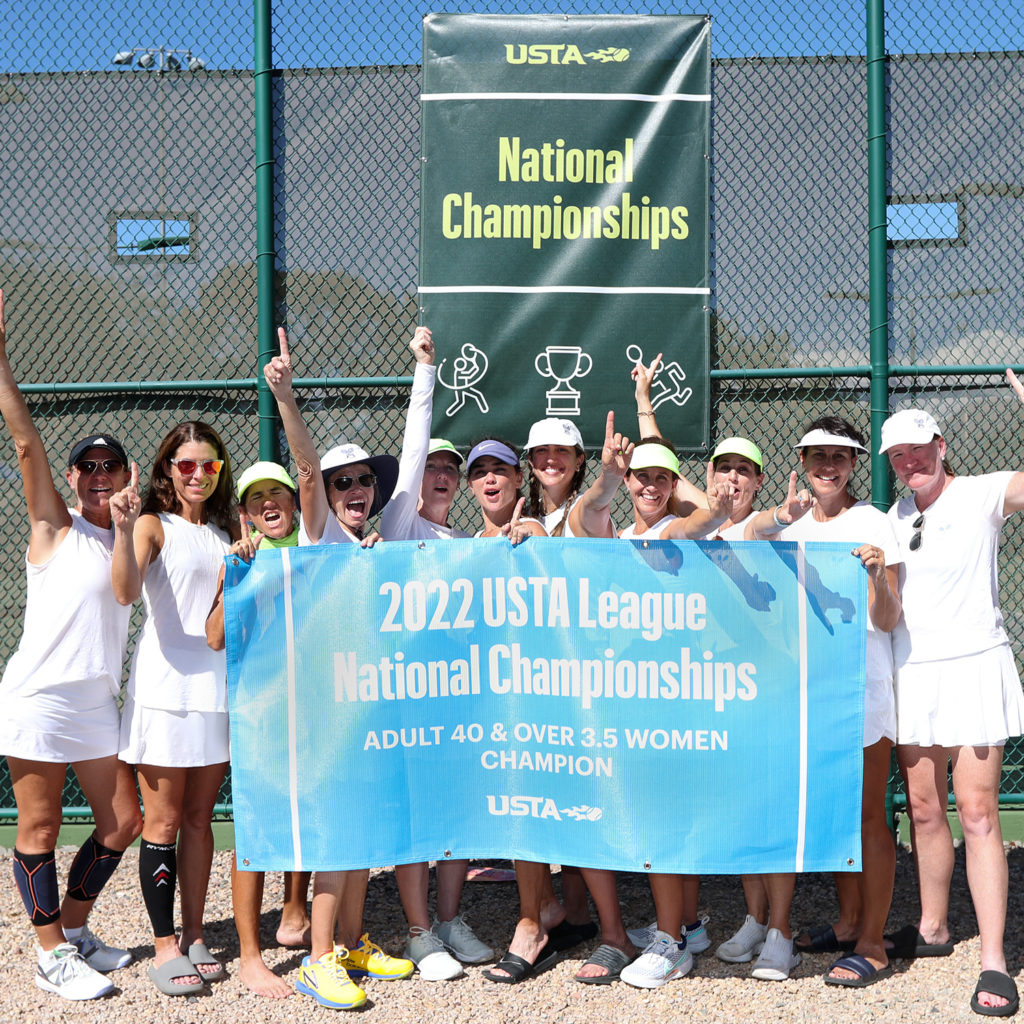 From winning League Sectionals at home to competing on the National stage, the USTA League season has come to an end, marking a banner year for #TeamSoCal in national competition across the country. In total, thirty-six Southern California League teams competed among almost 600 League teams at various events across five cities, each seeking a USTA League National Championship. Among those teams, we are proud to celebrate five teams that earned national titles, and many more who finished among the nation’s best this fall.

The Adult 40 & Over Women’s 3.5 team from Los Angeles was the first Southern California team to capture a national title at this year’s USTA League National Championships in Scottsdale. The final came down to an all too familiar SoCal vs. NorCal battle, when Joanna Morley swept the singles against Kirsten Treais, winning in straight sets. Stacy Sarner & Megan Colligan followed with another straight sets win in doubles to capture the title for SoCal.

The Adult 55 & Over Men’s 7.0 team from San Gabriel Valley — dubbed the “Amazing Santa Anita” — claimed the second national title for #TeamSoCal at the National Campus in Orlando. Captain Andy Chang, who previously captained a 55 & Over Men’s 8.0 team known as the “Seabiscuits” to a national title, used that experience to his advantage with this year’s 7.0 entry. On the final day of competition, SoCal swept their first set of matches against Southern, winning all 6 sets. In the final against Texas, Victor Ho and Alexander Sun competed in an intense victory ending in a third set tie-break, James Min and Don Kim finished their doubles match in a straight sets win – overall, the team won 24 of 26 sets the entire weekend and another national title for the Captain.

The weekend of October 14-16 was dominated by San Gabriel Valley players, as the Adult 18 & Over Women’s 4.0 team took home the national title in Surprise, just after San Gabriel’s Adult 55 & Over Men’s 7.0 team was crowned top of their division earlier in the day.

After proving to be a powerhouse against a team from Hawaii in the morning, winning all five matches in straight sets, the team from Whittier Narrows Tennis Center in El Monte took on a team from Mid-Atlantic where they also had a clean sweep in all five matches to secure the national title. Then, for the second year in a row, Southern California claimed the Adult 55s thanks to team “Skyline,” another Whittier Narrows squad.  Skyline defeated a team from Mid-Atlantic in the semis to advance to the championship finals against Southern, where they won all three matches to bring home the top title.

San Gabriel Valley was on a roll this year with the help from captain Colin Tang in the Mixed 18 & Over 8.0 division. The “Wild Cards” squad claimed the fourth League championship for San Gabriel Valley and the fifth overall for SoCal during Halloween weekend in Orlando. The Wild Cards won all three of their matches against a team from the Caribbean section to claim victory. Colin Tang and Laurie Manley dominated their doubles match while Katherine Wu and Eugene Shin secured their victory, followed by a triumphant Edward Choi and Lauren Nicole Finke came back strong straight set win.

Teams placing in the top five of their respective divisions included:

Various divisions, including Adult 65 & Over, will compete early in 2023 to finish the Fall championship calendar.

Take a look at the different SoCal teams who represented our section nationally this league season and see the full results from the 2022 championships.