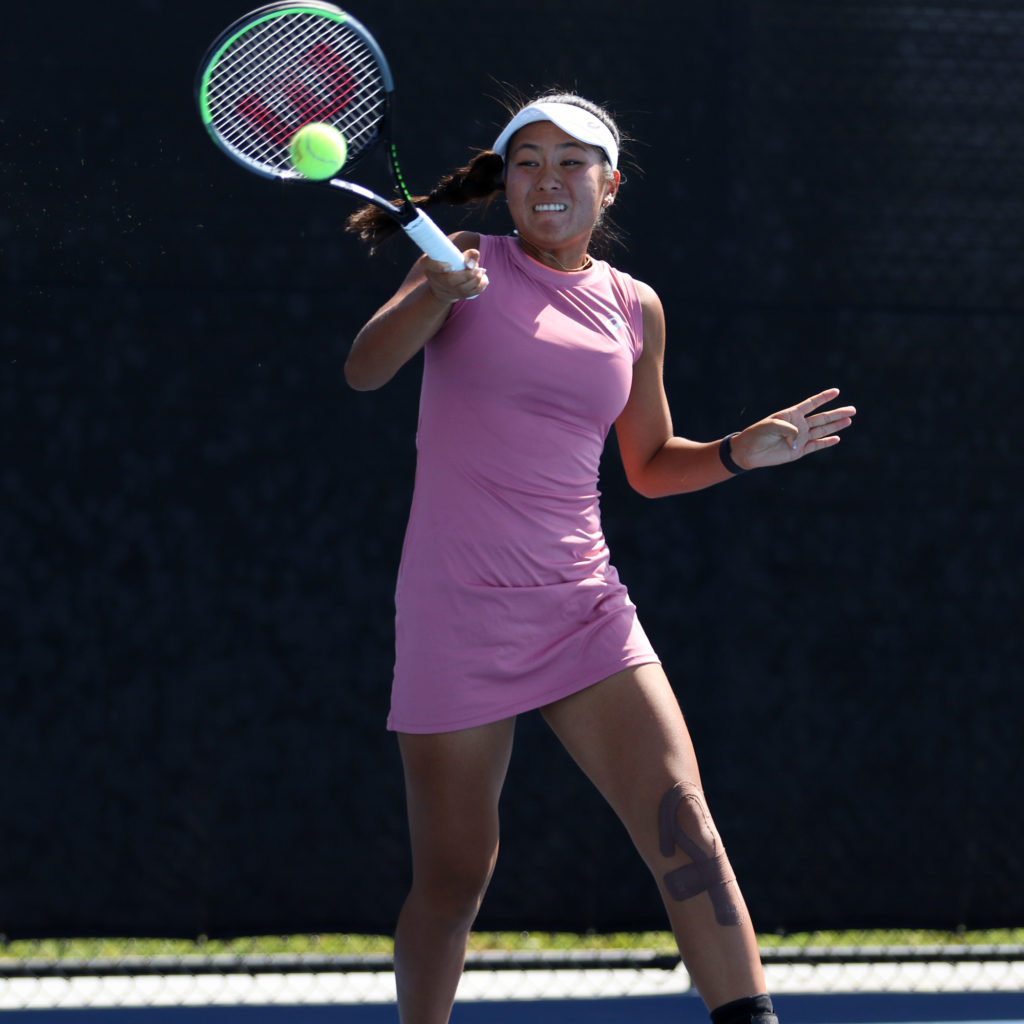 For McCray, Sunday’s women’s singles final represented a homecoming that was meant to complete her tennis comeback with a first taste of glory on the International Tennis Federation (ITF) World Tour. Holmgren, meanwhile, had designs on a second SoCal Pro Circuit men’s singles championship serving as his fond farewell to San Diego.

However, Makenna Jones and Ethan Quinn had their own visions of how Sunday’s last act in San Diego would end. The Americans won their first ITF singles titles Sunday at Barnes Tennis Center, with South Carolina native Jones, 24, rallying for a 3-6, 6-3, 6-3 victory over McCray.

Then Fresno resident Quinn, 18, saved five match points through a second-set tiebreaker and pulled off an improbable 3-6, 7-6 (7), 7-6 (4) victory over Holmgren. Quinn called Sunday’s final a “top three” win in his life on the tennis court.

“Winning a 15K (ITF tournament) wasn’t in my realm of possibilities in my mind of what I could accomplish so quickly,” said Quinn, who will play at the University of Georgia as a freshman next school year and plans to play the last three events on the SoCal Pro Circuit. “Getting the win against August, who is a very well-established player on the Futures level. He won one (on the SoCal Pro Circuit) two weeks ago and was in the final of NCAAs. Definitely one of my best wins. It’s definitely given me a lot of confidence. I feel really good at Barnes. I feel really good in California.”

Upon the completion of her collegiate career at North Carolina last year, Jones is looking for a full time on the ITF and USTA Pro Circuit. She has played all three SoCal Pro Circuit events thus far – the first time she’s ever played ITF events in consecutive weeks – and plans to play the last three tournaments as the circuit shifts to Los Angeles and Orange County after a week off.

“I saw (SoCal Pro Circuit sponsor) Bruce Kleege one of the days and I just thanked him because this is amazing to have these tournaments all in one location. It’s been an incredible three weeks,” said Jones, who dropped her racket, kneeled on the court and shed tears of joy upon prevailing on match point.

“I really couldn’t believe it, and still really can’t. Each day felt like a gift, I guess, continuing to play. I came from qualis so I’ve been grinding for seven days now. Every day was just more and more surreal. It’s a good start. It’s a journey and so we’re just beginning. So definitely my first sprint at it.”

Conversely, McCray has a marathon-like history with the ITF Tour as Sunday wrapped up her 36th ITF singles event dating back to 2011.

McCray’s first final came on the heels of playing these past three weeks on the SoCal Pro Circuit, which constituted her first ITF main draw competition in over two years, mostly due to the pandemic and a lack of Southern California-based events on the ITF/USTA Pro Circuit schedule.

“I took quite a bit of time off and to be back after two years and reach my first pro final is amazing,” McCray said. “And even more amazing to do that right in my backyard, basically, in San Diego, and at a place I grew up playing at so that means a whole lot to me. And I’m playing well so I’m just excited to keep going on the new SoCal Pro Circuit. I’m definitely trying to move up the ranks. Get into bigger tournaments, starting here.”

Sunday was the final tournament for Holmgren, who spent his first three weeks as a pro on the SoCal Pro Circuit. He will soon return to his native Denmark to continue his budding tennis career in Europe.

After five years of stellar play at USD, Holmgren leaves the Toreros as a West Coast Conference champion and the 2022 NCAA Division I national runner-up in singles. Off the court, Holmgren said he will miss his friends and the surfing the most.

Said Holmgren: “It’s the relationships I’ve built here throughout the past five years that mean the most to me. I really want to get back here at some point.”

Holmgren is grateful to having embarked on the start of his pro career on the SoCal Pro Circuit. His immediate goals in returning to Denmark include seeking out a schedule of 25K Futures events with a view towards qualifying for the Challenger Tour.

“I’ve come away with a lot of (ATP ranking) points, which will be helpful for the future,” Holmgren said. “I got 17 points in three weeks, which is almost doubling my points from before. It’s huge for me. Especially to have some tournaments in a place where I know I’m comfortable is really cool and it’s really helped me start this next chapter of my life.”

The Barnes Tennis Center Open’s doubles championships were settled on Saturday as Quinn and Jones reached those finals as well.

Woldeab and Quinn earned eight ATP Tour ranking points and split $540 in prize money. Woldeab also reached the singles quarterfinals this week to wrap up his two-week run in the SoCal Pro Circuit, which began at the University of San Diego Open.

“It’s always fun being out here in my home club, Barnes Tennis Center, playing in front of people I know,” said Woldeab, who competed for the University of Texas in last month’s 2022 NCAA Division I Men’s Doubles Tournament as a sophomore.

“SoCal Pro Circuit has treated me great these past two weeks and I’m excited for next year. I didn’t have an ATP ranking before these two weeks and (USTA) SoCal graciously gave me a wild card into the main draw for both events. I think I used it well. There’s great competition out here and it almost makes you raise your level, compared to what you’re used to seeing at the college level. SoCal Pro Circuit has got awesome players playing in it.“

Thailand’s Bunyawi Thamchaiwat and 18-year-old Ya Yi Yang, of Chinese Taipei, defeated American Sara Daavettila and Jones (a 2021 NCAA Division I women’s doubles national champion), 6-3, 6-4, in capturing the women’s doubles crown. Thamchaiwat recently finished her collegiate tennis at San Diego State and will play at Pepperdine as a graduate student next season.

La Mesa resident and Helix High School graduate Siem Woldeab reached Friday’s men’s singles quarterfinals with a 6-4, 6-0 victory over 16-year-old Irvine resident Learner Tien, the United States’ No. 1-ranked (USTA) Junior. Woldeab, the University of Texas collegiate who competed in the 2022 NCAA Division I Men’s Doubles Tournament as a sophomore, then teamed with Ethan Quinn for a 3-6, 6-0, 10-8 (third-set, 10-point tiebreaker) quarterfinal win over No. 2 seed Colin Markes and Ajeet Rai.

Youth was served in the men’s and women’s singles draws. Learner Tien, 16, ousted fellow Irvine resident and 27-year-old Gage Brymer (No. 2 seed), 6-4, 7-5, as the men’s singles draw moves forward without its top two seeds after the first round. Aliso Viejo resident Alex Michelsen, 17, knocked off Coronado resident Ryan Seggerman, 6-2, 5-7, 6-3, in his first match on the SoCal Pro Circuit and faces Chinese No. 3 seed Zhe Li, the oldest player in the draw at 35, in Thursday’s second round. Tien and Michelsen – ranked Nos. 1 and 6 in the USTA’s national Junior rankings (USTA Boys’ 18s), respectively, and the top two ranked Juniors in California – teamed up in doubles for a 7-6 (10), 6-1 first-round victory over El Cajon residents and brothers Isaiah and Elijah Strode.

The SoCal Pro Circuit continues this week with its third, and final, tournament in San Diego at Barnes Tennis Center. Combining the finalists from the first two weeks of the new series with a new infusion of Southern California’s premium teenage tennis talent, the men’s singles draw looks to give San Diego and its attending fans a hotly contested, dramatic send-off.

Men’s and women’s main draw play in singles (32 players) and doubles (16 teams) for the ITF World Tennis Tour and USTA Pro Circuit event began on Tuesday following the conclusion of singles qualifying. The event is open to the public with free admission.

Barnes Tennis Center hosts Aliso Viejo resident Alex Michelsen, 17, for his maiden voyage on the SoCal Pro Circuit. It has been a breakthrough year for Michelsen, who has committed to play collegiately at Georgia before his senior year of high school.

Together with Learner Tien, the two Orange County aces are ranked Nos. 1 (Tien) and 6 (Michelsen) in the USTA’s national Junior rankings (USTA Boys’ 18s) and are the top two ranked Juniors in California. In fact, they are playing together in this week’s men’s doubles draw and play brothers Isaiah and Elijah Strode, of El Cajon, on Wednesday.

While Michelsen begins a new path on the SoCal Pro Circuit, this week marks the end of the road for University of San Diego standout August Holmgren on this series. He embarked on his final SoCal Pro Circuit appearance Tuesday with a 7-5, 6-2 first-round victory over Rancho Santa Fe’s Kalman Boyd.

Holmgren, 24, completed his remarkable University of San Diego career by finishing as the 2022 NCAA Division I men’s singles national runner-up on May 28. The very next week, Holmgren turned pro and impressively won the singles and doubles titles at the inaugural SoCal Pro Circuit event, the Rancho Santa Fe Open.

The Torero is set to depart San Diego after this week for his native home, Denmark, and will continue his professional tennis career in Europe. Having left a lasting legacy on the San Diego tennis scene this year, Holmgren hopes to leave his adopted U.S. home while enjoying one last hurrah this week on the SoCal Pro Circuit.

In perhaps Wednesday’s most intriguing first-round match, the 16-year-old Tien draws No. 2 seed and past UCLA No. 1 player Gage Brymer, 27, in an all-Irvine duel for bragging rights in their hometown.

“Known him for a long time but we’ve never played,” Brymer stated. “Should be a fun one.”

Tien, who makes his second consecutive SoCal Pro Circuit appearance, and Brymer reached the quarterfinals in last week’s University of San Diego Open. In the two weeks prior to last week on the International Tennis Federation (ITF) World Tennis Tour, Brymer won in Tunisia and reached the final of the Rancho Santa Fe Open.

San Diego native Zachary Svajda, 19, took some time off the ITF/USTA Challenger circuit to make his SoCal Pro Circuit debut Tuesday at Barnes Tennis Center as its highest world-ranked player (ATP No. 393) to play the series thus far. Though he was anointed this week’s No. 1 seed, Colin Markes, a 2019 NCAA champion at Texas, ruined Svajda’s homecoming with a 6-3, 6-3 first-round triumph.

On the women’s side, Sunday’s University of San Diego Open finalists Jiangxue Han, of China, and Ya Yi Yang, of Chinese Taipei, are entered in this week’s singles draw and begin play Wednesday.

Han, a returning sophomore to USC’s women’s tennis team, faces a difficult first-round encounter against Thailand’s Bunyawi Thamchaiwat, a 2021 ITA All-American and Big 12 Player of the Year at Oklahoma State who spent this past season at San Diego State and will move on to play at Pepperdine as a graduate student next season. Yang, the No. 2 seed who only turned 18 two weeks ago, opens against qualifier Anna Campana.

The first round got underway Tuesday with No. 7 seed Kimmi Hance, a Torrance resident and returning UCLA sophomore, tallying a 6-2, 6-2 win over 15-year-old San Diego resident Alyssa Ahn, who won this past year’s CIF-San Diego Section singles crown as a Torrey Pines High School freshman.

The singles semifinals and doubles finals are on Saturday, June 18, and singles finals are on Sunday, June 19. Weekend semifinals and finals matches will be live-streamed on YouTube (Saturday – https://www.youtube.com/watch?v=CWW7szJX21U; Sunday – https://www.youtube.com/watch?v=hJXqY5EJsio) with commentary from Cracked Racquets podcaster Alex Gruskin.

You can follow the men’s and women’s player field lists/draws/order of play for the SoCal Pro Circuit event at Barnes Tennis Center all week at the following links:

For photos from the event, check out our PhotoShelter: https://ustasocal.photoshelter.com/gallery-collection/USD-Pro-Open/C0000Hu5cxyAqs_U.