SoCal Wheelchair hopefuls look to pro athletes as inspiration at Paralympics, US Open 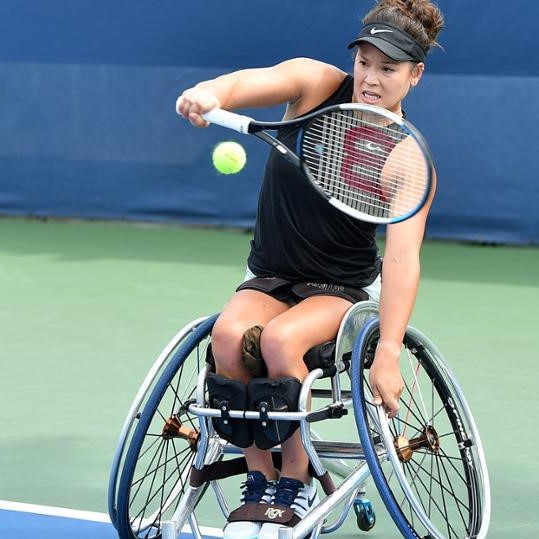 “It’s amazing because I’ve actually met Dana, and all of them,” said Henry Reyes, a 19-year-old Paramount resident and avid Wheelchair tennis player. “It’s surreal that I know all these players who are in Tokyo to represent our country. It just gives me so much inspiration that I can one day maybe competed at that same level.”

Wheelchair tennis was first contested at the Summer Paralympics as a demonstration sport in 1988. It became an official medal-awarding sport in 1992 and has been competed at every Summer Paralympics since then. Four events were held from 1992 to 2000, with quad events (mixed gender) in both singles and doubles added in 2004.

Reyes teaches tennis alongside Susan Nardi in Carson for First Break Academy and even had the privilege during the Paralympic Games of being invited to a “watch party” along with other aspiring wheelchair players nationwide at the Paralympic Training Center in Colorado Springs.

Back in June, Reyes participated in a Southern California Tennis Association Foundation Wheelchair Tennis Camp and took part in a USTA certification coaching clinic. Noted USPTA Elite Professional and certified Wheelchair Coach Dee Henry was also on hand and compliments Reyes for his dedication to the sport and noted his improvement over the past few months. She was also excited Reyes and the younger SoCal players were able to gain such positive feelings for seeing the world’s top players compete in Japan.

It was Henry who discovered 22-year-old first-year UCLA graduate student Krista Ramirez just two years ago on the campus of Biola University. Henry, the legendary Biola women’s coach before retiring and continuing her popular wheelchair tennis clinics at the university, spotted Ramirez on campus and “T-boned me with her bike,” Ramirez recalls, laughing. “She said, ‘do you want to play wheelchair tennis,’ and I said, why not?”

“For sure I’ve been following them,” Ramirez said of the Paralympians like Wagner and Mathewson. “The hope is to someday be on the U.S. team, but somewhere down the line. Probably not for a while. But it is a goal. Yeah, for sure I would say they are an inspiration.”

Players down in San Diego’s Barnes Tennis Center Wheelchair Tennis Program were equally as inspired as Reyes and Ramirez watching the Paralympics.

“I watched the quad men’s doubles and it was so cool to see this coverage,” Vickie Tueros said. “The sportscaster was excellent. She explained the taping techniques of the players. She addressed the differences with the chairs and commented that the smart play was to pick on the ‘weaker’ player over and over. She even commented on bio breaks and the hand taping issues. She said they get the same amount of time and have learned to tape fast.”

Added another BTC clinic player Jeffrey Lee: “It’s great to see more players than we normally get to see at the Grand Slam events. I appreciate seeing all of the different players from around the world.”

Ramirez met top players like Mathewson and Baron in Orlando at the Wheelchair Collegiate Nationals at the USTA National campus where she partnered in doubles with her good friend Reyes.

“I just like hearing their stories and hearing them talk about forging their own path,” Ramirez said. “Especially with adaptive sports. It’s important to advocate for yourself and make sure you are getting the word out there and being a good representative for all the younger players out there.”

Reyes knows with hard work and dedication he can achieve his goal of playing in the Paralympics in 2028 in Los Angeles. “Oh yeah, I’ve mentioned that to my coach,” Reyes said. “I want to be in the 2028 Games. It seems possible to me. If I’m able to continue to train it seems like a tangible goal to attain.

“I get compliments from my coach that I can be in the big leagues someday. He says things like, ‘You’re so close’ and ‘You just have to train more and more and focus, and you can make it.’ I can see a lot of improvement from now until one year ago. Hopefully I can make it in 2028.”