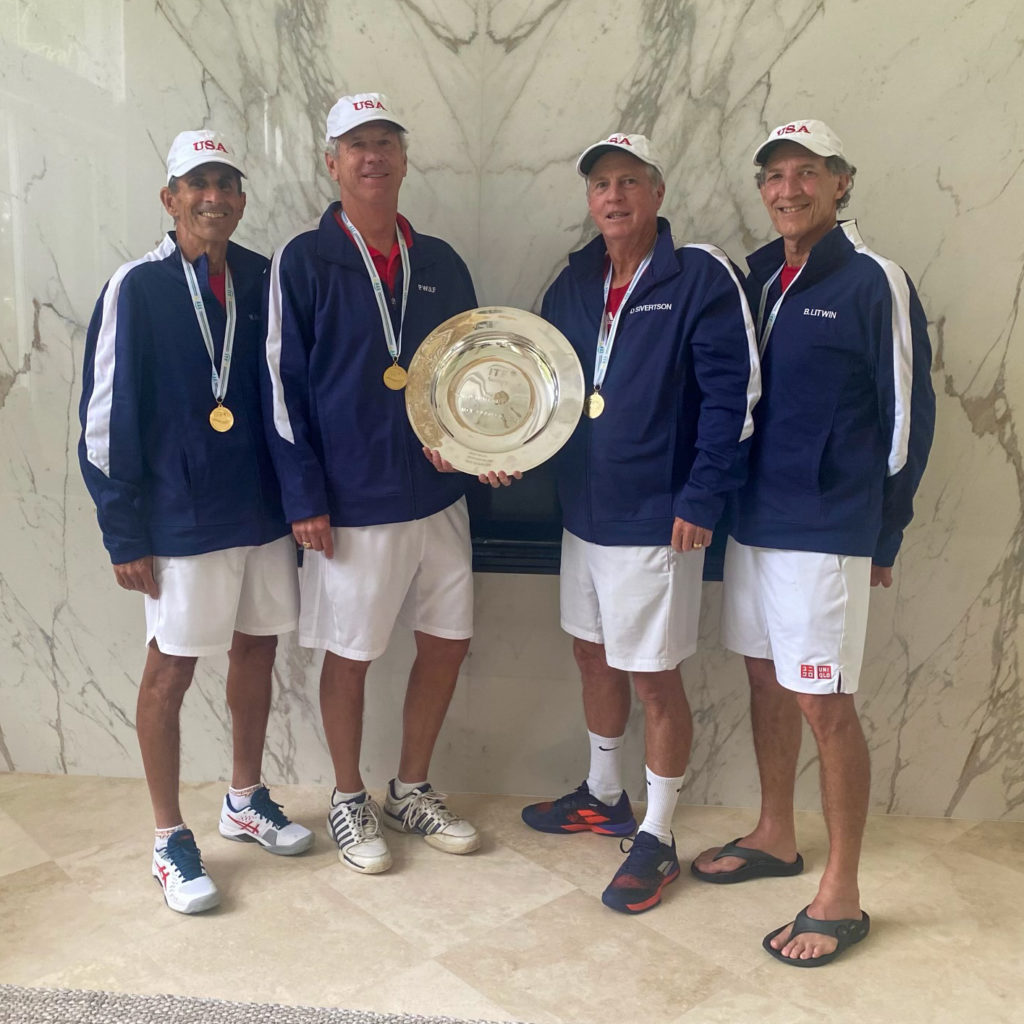 There are many who would argue that winning a USTA National Gold Ball is the ultimate prize for any competitive tennis player, from the seniors all the way down to the juniors. But for a select group of seniors who compete year after year on the ITF International Team Cup circuit, there’s nothing that compares to having a gold medal placed around your neck – at least in Dave Sivertson’s eyes.

For the third time during his illustrious senior career, and the first time as a captain, La Quinta’s Sivertson achieved the highest prize recently by leading his USTA team to a 2-1 win over Austria in the final of the ITF Super-Senior World Team Championships 70-and-Over Jack Crawford Cup in Palm Beach County, Fla.

“You take the highs of winning a national titles and multiply it by four,” said Sivertson, 70. “Sometimes you are even happier for the other guys. At the awards ceremony you hear the names called, and you walk to that podium and just seeing the other guys’ reaction is incredible.”

United States men’s and women’s teams won a total of six ITF Super-Senior Cup titles ages 65 to 85 during the competition and four other teams finished in second place. Rancho Santa Fe’s Carolyn Nichols successfully captained the 65-and-over Kitty Godfree Cup team to a 3-0 win over Great Britain to win the gold for the U.S. Cathie Anderson of Del Mar – with neighbor Suella Steel of La Jolla also on the four-player team – captained the Doris Hart Cup 80-and-over U.S. team to a runner-up silver medal finish in a 2-1 loss to Germany.

Sivertson has played on six out of the last seven ITF World Cup teams that have competed, including the last two held in Austria. After Covid forced the cancellation of the 2020 event, last year’s tournament was set to go as teams were named and airlines tickets purchased for Mallorca. But at the last minute the USTA thought best to keep all safe deciding not to send the U.S. team to compete in Spain. “We were all disappointed,” Sivertson said. “But we understand what a tough decision it was to make.”

Being a captain entails some administrative work, making the final call on lineups and overall leadership. Sivertson said he leaned on teammate and former captain Paul Wulf, even going as far as calling the pair co-captains. “You try and build a consensus and see what makes the most sense,” said Sivertson, who serves as the Director Tennis at Citrus Club at La Quinta Resort.

In individual play, Sivertson won five matches at the Worlds to advance to the semifinals in singles of the 128-player draw. Ranked No. 8 in the ITF world rankings, Sivertson broke to open the second set, but pulled a calf muscle and was forced to retire from his match.

Injuries have also kept the 65-and-over Kitty Godfree Cup team captain Nichols sidelined as she had to take nearly a year off because of an injured shoulder.

Nichols does an hour-long stretching routine each day that she calls a “whole new shoulder routine” that has kept her pain free and allowed her to compete. “It’s so easy to get injured and so much tougher to heal as you get older,” Nichols said.

Nichols, 66, has lost count but says she has played on at least 20 international Cup team over the years and had 14 or 15 first-place gold medal victories. “Once you’ve got one, you don’t it’s harder to keep track,” she said. “It’s great and all. But you realize it doesn’t change your life.”

Like Sivertson, Nichols advanced to the semifinals at Worlds Individuals losing to rival and eventual champion Patricia Medrado in singles and made it all the way to the doubles final for a silver medal with partner Carolyn Lane.

Nichols says her greatest advantage is her movement, defense and mobility. “I don’t have swings between my worst and my best tennis,” she said. “I’m always working on stuff and always trying to think of the best way to work on things.”

Nichols will travel to the ITF Canada 1000 Seniors event the week of June 6 and plans to spend most of July and August in Europe playing tournaments.

Next up for Sivertson is the USTA National Hardcourts in Irvine in two weeks and he hopes to be healed up and rested to try for another gold ball. Like Nichols, Sivertson relies on his speed and conditioning to be the 70-and-over players.

“I feel like I’m a step faster than everyone else, that’s my advantage,” said Sivertson, who plans to keep playing senior events. “I hope to stay the same as everyone else keeps gets older. The international players play all year long in hopes of getting selected to a Cup team. To play for the U.S. is our No. 1 goal. Gold balls are great, but there’s nothing like winning that gold medal for your country.”