This is… Carmel Valley’s Matt Sah 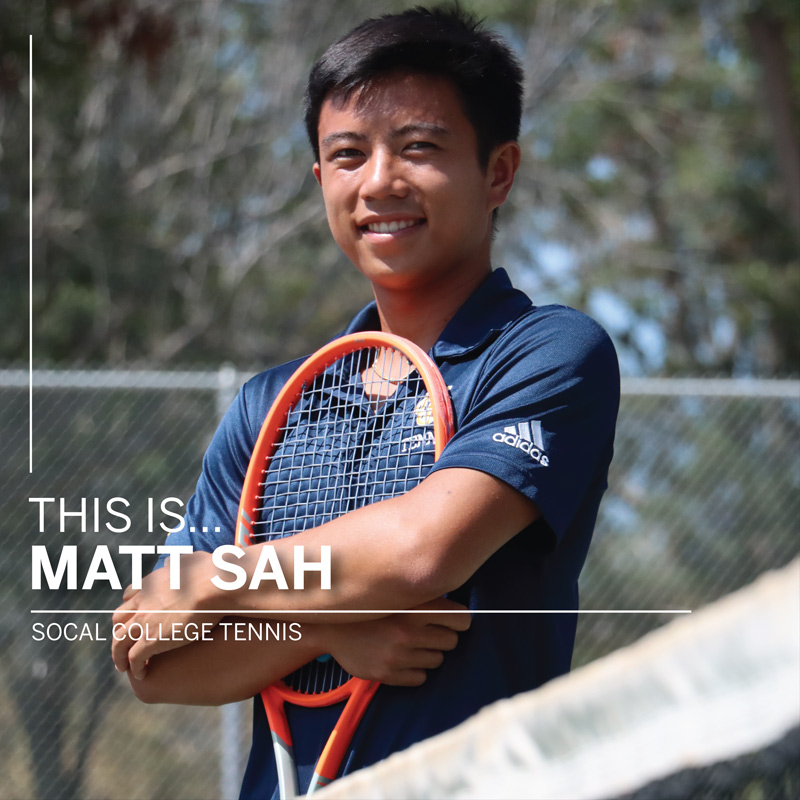 On and off the court, UC Irvine’s Matt Sah has always looked up to his big brother Tim. A little less than two years separates the two brothers who are both currently on Division I California men’s tennis rosters and both majoring in Computer Science.

Tennis has always united the Sah brothers, who trained relentlessly to achieve all they have in tennis growing up on the courts near the Sah family home in Carmel Valley near Torrey Pines in San Diego County. Matt is a 20-year-old junior playing for UC Irvine while Tim is 22 and plays for Stanford University in his fifth year of eligibility.

“We’re pretty competitive in practice, but we’ve never played sets,” said Matt. “He was always a little too good.”

The two have never faced one another in a tournament or even kept tally of the score in practice matches. So, who would win if they were ever scheduled to play a tournament match? “Probably him,” Matt said with a smile.

Matt was taught the game of tennis by his grandfather starting at the age of 3. “We would spend hours on the tennis court with him,” Matt said. “It’s nice to have had some of the same shared experiences with my brother. We are pretty inseparable when we are home at the same time.”

Matt – whose mother and aunt played college tennis at MIT – made the tough decision after starring at Torrey Pines High School choosing UC Irvine over Claremont’s Harvey Mudd College. “I liked the location being so close to home and really get along well with my coach Mike Saunders,” Matt said.

Growing up in Southern California playing all the top junior events, Matt said he favored the team competitions like 18s and 16s Intersectionals the most. “The team events are so much more fun,” he said. “Just the environment and the cheering and having others root for you. I definitely love the team aspect.”

But it was a remarkable run at a singles event that Sah recalls as his most memorable as a junior. “It was at the Woody Hunt at the Kramer Club and I somehow won the tournament unseeded,” Sah said. “That was my first really big tournament win.”

Sah said he’d like to follow the path of Tim and graduate in 2022 and then go for his Masters in Computer Science or perhaps business school. “I’m not really thinking about playing pro tennis after college,” Matt said. “I just like being on a team right now and really enjoying the college experience.”